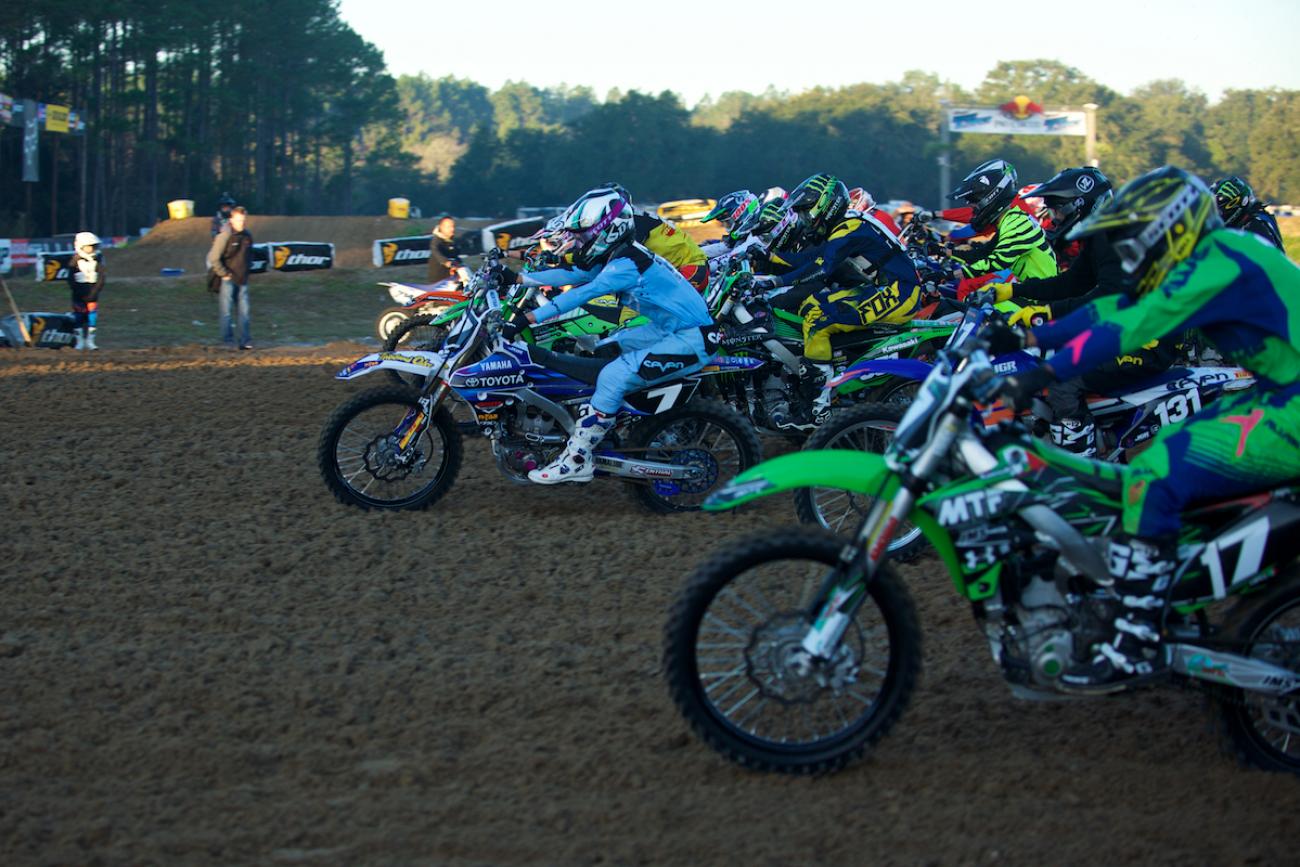 What's the word on the street this week? We pulled together some of our favorite stuff and stuffed it in here.

@DeanWilson15 @CRtwotwo I went off the track that night I think

@DeanWilson15 @CRtwotwo whoops were easy, My mate CR22 was mad

While the opening round of the 2015 FIM World Motocross Championship is still nearly three months away, talk continues to center around RV vs. AC. At the recent FIM Gala in Jerez, Spain, Villopoto and Cairoli talked with MXGP's Marionna Leiva about the up-coming season.

"For me, you're asking a racer to talk about another racer…he's a guy that's been there, like you said, for eight years and puts in the work, puts in the time," Villopoto says in the video. "All I can do is do the same."

This probably won't be the last time the two are asked these questions. In the meantime, check out the full interviews below.

Yoga is hip and trendy, and it gave the world yoga pants. Thanks, yoga. But yoga and motorcycles? No, we're not talking about the latest in motocross fitness; this guy actually performs yoga while riding! According to Mashable.com, 40-year-old Gugulotu Lachiram is a farmer by trade and has "become a local celebrity in his hometown of Khammam in the Indian state of Telangana where he performs his tricks for locals." Anyway, check this out!

We tend to focus on social media a lot in The Word On… Heck, we even have “Social Media of the Week” at the top of the page. It's not just us, and not just this sport. No longer must you wait for Cycle News (our Sports Illustrated) to find results. Thanks to Twitter, results are provided as they are happening. Social media has also changed the job of the reporter. No longer are 1,500 word recaps the only requirement. One most now constantly monitor social media. Chad Finn of Boston.com provided great insight on how Twitter has changed reporting in baseball. From Finn:

For those who cover baseball, particularly when the hot stove is reaching its boiling point, the chase never ends and the smartphone becomes a permanent appendage.

During a recent conversation, I asked Rosenthal if he has any idea how often he checks his phone for texts and Twitter updates.

“Every waking minute,’’ he said, chuckling faintly. “That part of it is really disturbing, actually.”

It’s also part of the gig. Unlike those who are anticipating baseball news, those reporting it cannot wait until morning to find it out.

Okay, this is just crazy. This guy obviously didn't think a plank of wood or old tire would be fun enough for his kids. Nope! Little Susie needs something more daring. So he decided to hook a bike up to a rope swing. According to Autoblog.com, the father, who is probably really fun to hang with, is from Burrillville, RI. That settles it—we are road tripping to Rhode Island.

Americans suck at geography, so we get really confused during international supercross season. You want confusing? Try sifting through races in Geneva, Genoa, and Genova. Or is that just two races? We emailed Eric Peronnard, the man who helps promote these events, to figure out which is which.

"Genoa, Italy was last week, where Barcia got hurt. Geneva, Switzerland is where I am this weekend. Genoa is also spelled Genova. Don't ask why."

"It gets spelled differently in different languages. In French, it is Genes!"

Hmmm. We might have actually just gotten more confused.

Spam bots are getting smarter. This week we received an email that aims right to the heart of our business—racing sponsorship—but missed the mark just enough to where we know it's fake. Or is it?

My name is Matthew,

I have a suggestion and cooperation. My interest and hobby is computer and automotive. Looking for a sponsor, sponsorship, to invest / zasponsorowania me to
deposit or purchase Quad can am, more submission from scratch (I'd
composed) to the races, rallies, events, the pictures in the newspapers,
the media, the Internet.

It's good publicity and promotion in the media and on the Internet through
its logo on the vehicle, and more. In this case, if the first failed to sponsorship Quad can am, then Ifounded the site with the official sponsor of your company.

1. The right to the title of "Official Sponsor" on all events only and
races.

2. The right to the name of the SPONSOR on any website in the Automotive
and newspapers on this subject in its relations with the course of events,
races, and more,

3. The right to publish the name of the SPONSOR in local newspapers, in
relations with the course of events and races,

4. The right to publish the name of the SPONSOR local television stations,
websites Automotive in relations with the course of events and races,

5. The right to place the logo on all SPONSOR shirts, caps, vehicles and
shorts,

6. Information on the general sponsorship will be in materials for the
media photographs and films,

7. General Sponsor has the right to make their advertising materials.

This lifetime opportunity to grow your business and promote it:

The possibility of shooting and recording, with the event and sponsor races with Logo

Able to advertise through the logo on T-shirts, hats and vehicle

The possibility of a visible logo prominently compelling

Opportunities to promote shooting to multiple media and automotive
websites, and more.

The possibility of hitting the local television along with the promotion of
Sponsor's logo.

I look forward to cooperation and response.

Maybe we should forward this to the GNCC office next door? Dudes legitimately race Can-Am quads in that series.

With a month to go before Anaheim, two plans are on a collision course: You're going to hear riders talking about working hard, about sprinting, about boot camp, about being tired, and about making the sacrifices needed to be a champion. Then you'll also hear trainers saying they need to hold their guys back, not overtrain, not peak too soon. This confuses me to no end. To hear most trainers tell it, the key to a professional training program is to make sure your guy doesn't train too much. But, seriously, don't the riders have to train really hard at some point? Are they training really hard or not? I could ask some people, but the answers always conflict. By the way, Aldon Baker has trained quite a few champions, and you never hear anyone say his program is easy. You do hear about how crazy hard his bootcamp is. By that measure, it just seems like more work equals more success, yet you'll still hear "It's key not to do too much" from inside the pits. Are these guys working really hard or not? I don't get it!