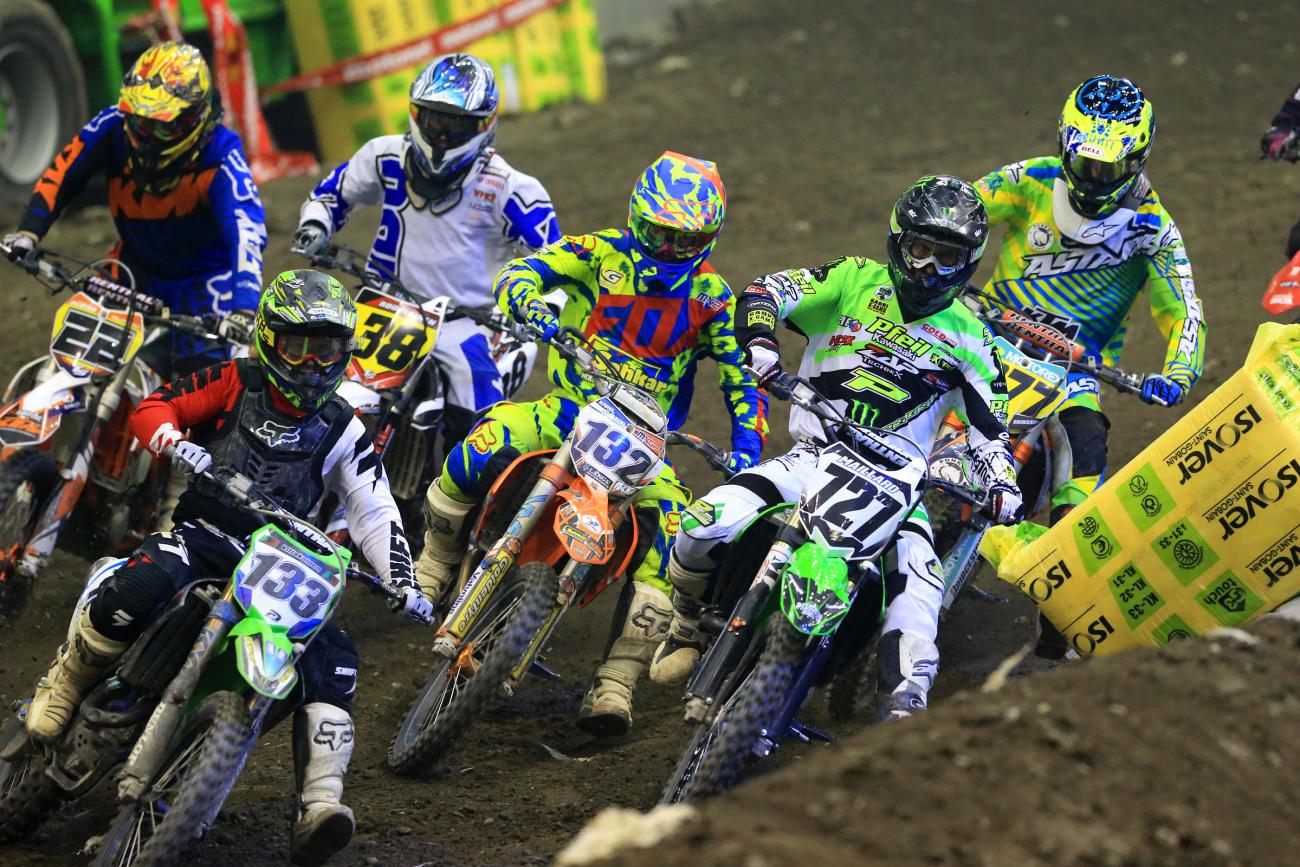 BTO Sports is your number one source for all of your motocross parts, gear, accessories, and apparel. BTOSports.com is a motocross company that is truly dedicated to the sport and to the customer. Proud sponsor of your Racer X Podcasts and the BTO Sports race team.

After the Lille Supercross I stayed back in Europe for the week and headed up to the Tampere Supercross in Finland. Tampere is a town a couple of hours north of Helsinki, and it was holding a supercross for the second time. The venue was a convention center, so there was a bike expo going on at the same time with the actual track in a barn-ish type building. Sure, Tomac and Barcia were over in Genoa, Italy, and perhaps that was a bit bigger, but I guarantee they didn’t have a dinner for the media that consisted of eggs, hash browns, and beets there.

The capacity wasn’t very big, but the place seemed pretty full both nights. And being Finland, there seemed to be a lot of people in the trackside beer gardens as well.

The track wasn’t very big (thirty-second lap times), and the skill level of the riders there this weekend was pretty varied. The track builders made it pretty basic, but there were a couple of spots where the, ahem, better riders could make up some time and push the limits. There was a quad out of a corner that enabled riders to triple onto a tabletop, and if they couldn’t do that they would go inside, double and also triple onto the tabletop. With the soft dirt and the ruts that developed, tripling onto the tabletop was tough and the quad got to a point where riders couldn’t do it anymore.

I heard that the guy who designed and help build the track wadded up on his first lap of “testing” it and got hauled off to the hospital. So there you go. Maybe it was really tough?

There were some guys that probably didn’t belong out there, but then again the Finns aren’t known for their supercross skills, and there’s not a lot of riding going on at the end of November in Finland.

In other news, two of the great Finnish riders in motocross history, Pekka Vehkonen and Mika Kouki, were both in the house on Saturday night. Well, maybe Kouki isn’t one of the greatest, but I always remember him for wearing cool looking JT gear back in his GP days, and he usually looked great on the bike.

The reason I was in Finland eating eggs and beets (who am I kidding, I hate beets) was because my buddy Jason Thomas was making a comeback to racing. That’s right, retired for two years and working for Western Power Sports, Thomas was lured back into the spotlight to a race he once won before. He came for the promise of riches and glory. Well, expenses and a mechanic anyway. JT brought me over with the promise that I would sort of be his mechanic, and although I helped his guy Jakko with putting the bike together and taking it apart, it was mostly Jakko’s show. Thomas mentioned to me that I would be down on the line helping him, but as a former mechanic, there would be no way that I could make Jakko do all the work and then take away the only “glory” (and I use those words very loosely) a mechanic has, so I just watched from the sidelines while Jakko became the man. But make no mistake folks—there’s no way JT would’ve gotten his results without me putting on the one footpeg and one grip and wiring them up.

Thomas was in the top five when he could get some starts, but on Sunday he got taken out in both main events. It wasn’t his fault, but when you don’t get a start things happen. He came inside and executed a perfect block pass on a dude in one main event, but the dude decided to take the guy down that was passing him and inexplicably turned down onto JT. Then he popped up and waved his arms at Jason for some weird reason.

Anyway, Thomas was pretty pissed after the races at his results, but when you’re holding down a desk job during the week and you’re dealing with arm pump, what are you gonna do? He should’ve been fine with his results and the guys that should be really worried were all the Finns that he handled easily, because I guarantee you some of those guys probably still have dreams of making it.

It was nice to see Thomas out there riding again, and I of course slapped on a Pulpmx sticker to try and get some magic for him, as it worked for Peick last weekend in Lillle. Unfortunately for JT, I think it got worse after I put the sticker on.

I do know that I was key for moral support. I offered line-choice selection, recommended gear choices, and talked suspension set-up. I really feel like my big help was when he took two teeth off his rear sprocket, and I reminded him before the race to keep the revs up because he needed that jump off the gate and might not get as much of a jump with two less teeth. I guess riding and tech tips are like flying the space shuttle—once you do it, you never lose it?

The big winner this weekend was Finnish hero Harri Kullas, who swept all four main events, but it wasn’t without some controversy. Yeah, controversy I said! Kullas was very good all weekend long, and I think out of the four heats and four finals he rode, he won everything but one. But in one of Saturday’s main events there was a left after the whoops with an inside bump to help slow the riders down and make the outside an option. Kullas was leading and then was passed by Boris Maillard (French rider). Meanwhile the track dudes forgot to place the hay bale back on the inside of this bump after the FMX show and a lot of guys were just hanging a left and missing the bump completely. Kullas decided to follow the lead of most of the other guys and saw this bump off. (JT didn’t do this—he and Maillard were two of the few guys to not cut—and when I told him he should’ve, he said that he saw it but could never get over there fast enough.) When Kullas took the line, it allowed him to make up precious seconds and get by Maillard for the win.

There was some grumbling by Maillard after the race, but I think he quickly realized that his protest probably wouldn’t go well because he was in Kullas’ home country. After this main event the bale was replaced and there were no more problems.

Kullas was great either way. He rode well, and I never really saw him make a mistake. I think Maillard was pretty much his equal, but he didn’t get the starts or would fall in the first turn. We never really saw a straight up Maillard/Kullas battle to the death because one of them (mostly Boris) made mistakes. After these two guys, it was Maillard’s teammate Filip Neugebauer who was a tick off of those guys, and then JT and some Finns.

I hung out with Maillard at the airport on Sunday and told him he should try to race a supercross or two in America. He’s got some talent for sure. You could see that, like a lot of French riders, the indoor stuff came easily for him.

There was a guy there named Jani Roos who just seemed to be attracted to JT. It was weird, JT was faster but Roos was just…there. He was everywhere. JT couldn’t get away from the dude in practice or races or whatever.

There was another American there named Aaron Lampi from New York. He’s an amateur guy just turning pro this coming year, and he had never been overseas before. He is a nice guy, and he knows Phil Nicolletti because, well, they’re from New York. At one point Lampi had crashed seven out of the nine times he had hit the track. And a few of these weren’t your simple tip-over-in-a-corner-type get offs. No, no—Lampi went down hard a few times. There were a few where I was like “Well, that’s it kid. Enjoy the hospitals in Finland!” and he would be back out there the next time. Is “Lampi” Finnish for “He who eats dirt”?

Lampi got better and ran second in the main for a while on Sunday before he—yep, you guessed it—crashed. Lampi’s racing supercross this year, and I highly recommend you fans keep an eye on him.

Australian Garen Stapleton was there also. I had never really heard of the guy before, but it turns out that he’s racing the German Supercross series (like Filip and Boris). He’s just one of those journeymen racers that’s trying to make a living riding his dirt bike. He gave his girlfriend his car before he left for Europe for three months, and then she broke up with him. Now he doesn’t know where his car is.

Look, I love going to Europe. I can’t believe that people give me free trips to go there and watch dirt bike races. But I think no matter where you live, home is better, right? I guarantee you most Europeans who come to America think that wherever they’re from is better than America. Well, except for David Vuillemin, Sebastian Tortelli, and Grant Langston.

I love the history in Europe (Yeah, Finland isn’t technically part of Europe or whatever—I get it), and the Finnish people I met were great. They were all friendly and funny guys—they reminded me of my buddies, really. Here’s an example of how nice the Finns are. JT and I were wandering around looking for the after party and went to the wrong bar. The bouncer there wouldn’t let us in (which confused us because we were supposed to be on a list), but then we figured out this wasn’t the bar.

And I was in shorts and a t-shirt in November because who wants to deal with a jacket at a Finnish bar, right? (And I always, always wear shorts.) Anyway, this bouncer realized we weren’t at the right place and walked us to the sidewalk and gave us directions. Then he recommended we put on some jackets because it was a far walk. When was the last time a bouncer/doorman at a bar in America gave you directions and was that concerned for your welfare? So, yeah, Finnish people are great.

Here are some of my issues with Europe, and I recommend some changes for the continent ASAP—please and thank you.

Anyway, these are my recommendations for you people over there. Thanks for reading. I appreciate it. Thanks for caring about my trip to Finland. Email  me at Matthes@racerxonline.com.