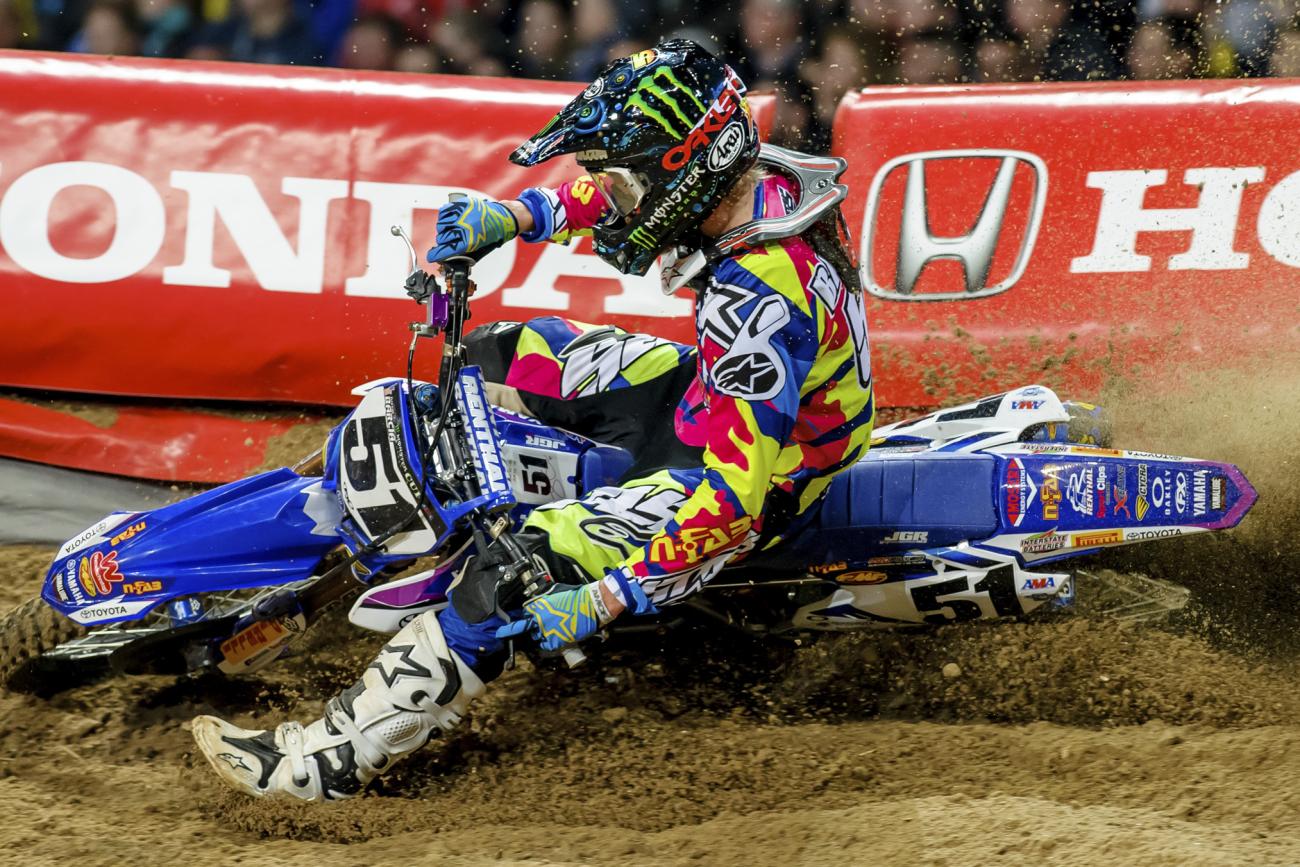 During the racing season, the sport gets to hold weekly meetings (usually on Saturdays) where all the latest gossip and hype dispurse through the pits and the stands, then begins to disseminate via the Internet. Following it all takes a strong focus for literally one day a week.

Not so easy this time of year. News travels from all directions, be in test tracks in Florida and California, or off-season races in Europe. We've taken a filter to some of the best of the web and put some of the good stuff here in The Word On. But since it's not even racing season, really, why not cast a wider Internet net? We've grabbed some moto stuff, and some from beyond, to give you in the info you need to sound cool around your friends this week.

You probably need the help, buddy.

Dear @VitalMX, I'm currently around 6'0 & weighing in at approximately 150 pounds. I hope this will resolve your ongoing investigation.

Someone on Vital asked if Adam is still small or not. Well, that answers that.

Both of these triples are booters.

We tend to agree.

Terrible first night but got it done tonight!! Pumped for my boy @jaceowen410 America 1-2 #merica

Malcolm Stewart was in Lille, France, last weekend for the annual Bercy Supercross. Malcolm, one of the better personalities in the sport, granted the guys at Vurb Moto great access during his trip, allowing them to document his time there. It’s always nice when the media is allowed access like Wes Williams and Vurb enjoyed with Malcolm. Enjoy the first two episodes of A Predator in Paris courtesy of Vurb Moto and Seven.

BTOSports.com KTM’s Justin Brayton will miss “ a week or so” after dislocating his pinkie in Lille last weekend. Brayton, who finished twelfth overall, said on Instagram he doesn't expect to be off the bike long.

Made it back to the states. Unfortunately dislocated my pinkie on the second night of racing in France. Shouldn't be off the bike long, maybe a week or so.

Ken Block has managed to top himself again with Gymkhana SEVEN: Wild in the Streets: Los Angeles. Block, a longtime friend and fan of Racer X, surely faces a huge challenge each year topping his previous efforts, but he grabbed another gear (harhar) by ditching his typical Ford Fiesta rally cars for a custom-built 1965 Ford Mustang. Then he got some of the busiest highways in the world shutdown so he could go ripping around Los Angeles. You'll recognize some of the sights and scenes, for sure. By the way, Gymkhana SEVEN has garnered nearly six million YouTube views IN THE FIRST DAY IT WAS POSTED.

Now, check out this amazing YouTube film from Honda UK, promoting the Civic R (a car that, unfortunately, is not sold in the US). This is the first two-sided video we've ever seen. Open it on your computer, and then click the R key on your keyboard as you watch. The R key literally toggles between two different, yet completely parallel, videos. It's just amazing and makes us wonder how painstaking the direction must have been to make it happen.

These Gymkhana and Honda efforts are big-budget ways to sell vehicles and products in a world that's quickly moving away from typical print and television commercial advertising. They cost money to produce, but a company like Honda could literally remove four national TV spots from their annual budget and find a million dollars to make this. You've got folks fast forwarding through commercials on their DVRs while also searching out these videos on YouTube. Think about it.

Lisa Saxon was a pioneer in sports journalism. In addition to her time covering the Angels (1983, 1985-87), the Dodgers (1984), and the then-L.A. Raiders (1988-1990), she worked the NBA Finals, NCAA Final, World Series, Rose Bowls, Super Bowls, and more. But it was her constant fight against sexual harassment and access for female sports writers that really set her apart. Jack Ross from Vice Sports has the story.

When Saxon got her start in 1979 as a 19-year-old Cal State Northridge sophomore by day, LA Daily News sports reporter by night, sexual harassment wasn't part of the American vernacular. In the days long before Anita Hill's testimony against Clarence Thomas, gender discrimination, exclusion, and carte blanche cruelty were accepted aspects of the workplace status quo for women.

And from 1983 to 1987, when Saxon was one of only three woman (along with Yankees' beat writer Claire Smith of the Hartford Courant and the Sacramento Bee's Oakland A's beat writer Susan Fornoff) who covered the majors full-time, degradation was a commonplace occupational hazard.

One of the more interesting features on Racer X last week came from contributor Aaron Hansel, who did a small piece on Ghetto Man, the successful character in the Crusty Demons of Dirt franchise. Once the feature went live, there was a lot of intrigue and questions. Like did we really talk with Ghetto Man? And why even do this? Hansel fills us in on why he decided to do the piece and the reaction.

Last week I penned a Between the Motos with Ghetto Man, a character from the incredibly successful Crusty Demons of Dirt. When it went live, I received a few texts from friends, most of them simply reading, “WTF?” The second most common inquiry was, “Were those quotes actually real?” The answer is yes, and they came directly from Ghetto Man himself. He’s a real person and I met him at the Monster Energy Cup while bumming chow at the JGR rig. The dude comes to the races!

JGR suspension tech Johnny Oler introduced us, and we all shared some pretty good laughs over dinner talking about Ghetto’s, uh, film career. At some point Oler joked that Racer X should run an interview with Ghetto, and plenty of ridiculous, half-baked ideas, and angles started flowing. Believe it or not, this isn’t an uncommon scenario for the birth of new ideas, but even this one seemed a little out there. Plus, there was a very narrow window of readers it would connect with—moto fans who had seen Crusty Demons of Dirt 2, and both remembered and loved the sketch. Everyone else would just write it off as an attempt to fill space during the off-season.

Obviously we ended up proceeding with the idea, and I’m glad we did. As a writer it was a chance to have a little fun—something we don’t always get to do—while paying homage to one of my favorite sections of my favorite moto-vids as a young moto-head. I nearly ruined my laptop several times during the interview too—Ghetto had me laughing and spitting coffee all over the place! He turned out to be a cool guy, and I hope I run into him at the races again soon. Maybe I’ll even head out to the ghetto and watch him and those ridiculous goggles in action.

BEAST FROM THE PAST

We were digging through the Racer X Archives photo files earlier this week and happened to stumble upon some classic black and white photos of the "Beast from the East" Damon Bradshaw.

Since 2008, Steve Matthes has been churning out podcasts with some of the greatest personalities in the sport. If you've never dived into his archive, I encourage you do so. Each week we'll highlight a podcast that Steve, or I, or any member of the staff has enjoyed over the years. Here's his latest greatest hit:

With the Lille Supercross just wrapping up this past weekend, I thought it would be interesting to revisit a classic podcast with a guy that's very key behind the scenes in this race and many others. Listen in as promoter/traveller/industry mogul Eric Peronnard chronicles his journey from starting with O'Neal, a dealership in Las Vegas and his grand idea of starting the US Open in 1998. Eric is one of the most well-connected and well-respected men in this industry. A truly interesting guy with a great story. You'll love it.

Have we given Eli Tomac enough credit? His rookie 450 season washed out due to two poorly-timed shoulder injuries—one on the first lap of the first heat race of the year at Anaheim and one right before the Glen Helen National opener. Due to that, Ken Roczen grabbed all the rookie headlines (and the 450 National Championship) and now carries a ton of hype heading to A1. Kenny switched brands, too, which just adds to the buzz. High-profile team switches for others, also, have garnered headlines. Eli doesn't draw a ton of attention to himself and isn't switching teams. But we've seen time and time again that he's as capable as anyone on the gate in 2015, and underneath his hype-free persona, he's as competitive as anyone. While he has yet to win a 450SX and has but a lone 450 National win on his resume, he's already a proven champion in the 250s. Others will get the hype, but the Lille SX over the weekend serves as a reminder that Tomac is right at the top of any 2015 contender list.

Last week, KTM North America released three new models to their 2015 street lineup: the 390 Duke, the RC 390 and the 1290 Super Adventure. The 390 Duke retails for $4,999 and features "WP suspension components as well as a top quality ABS braking system by Brembo". The RC 390 retails for $5,499 and according to the release, captures the thrill of Moto3 racing. The two bikes are mechanically similar, you're just choosing what type of bodywork you like.

There are lightweight, inexpensive, fun street bikes, and that seems to suddenly be a hot trend in the industry. These bikes are all you need and nothing you don't.

The adventure side of the market is growing, too. KTM's new 1290 Super Adventure retails for $20,499 and features "semi-Active WP suspension, motorcycle stability control (MSC) with cornering and off-road ABS, MTC traction control with 4 ride modes, cruise control and the world’s first LED cornering light, comfortable heated seats and heated grips to make it feel like a factory-fitted ride."

All three models will be available in Spring 2015.