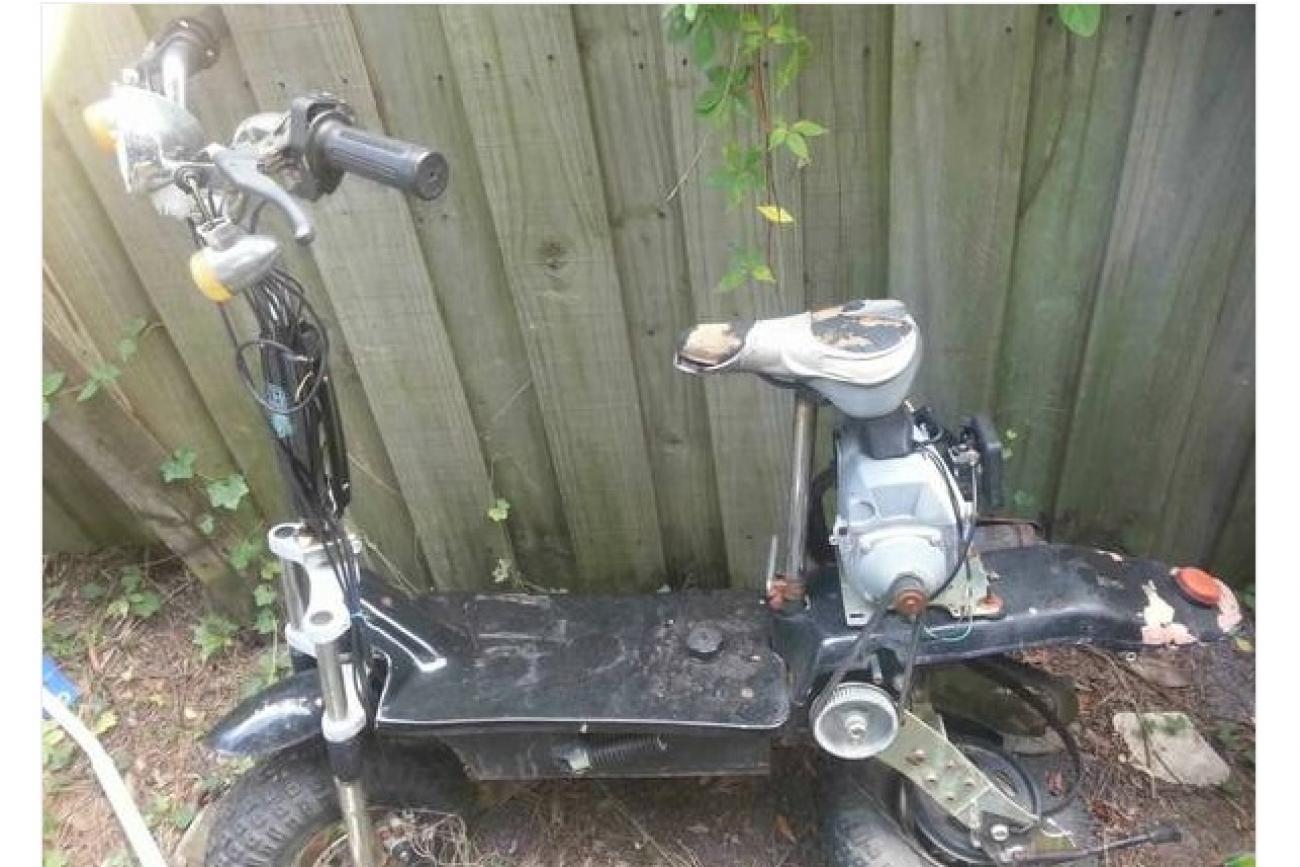 Anyone who has bought a motorcycle from a Craigslist posting is aware of just how many heaps of garbage you have to sift through to find something good. In our case, the actual garbage is the gold, and we’re passing it on to you with four gleaming examples of Craigslist’s finest. Enjoy, and as always, please feel free to email your own submissions to aaron@racerxonline.com.

Yes, we know Halloween is over, but we’ve named this one Trick or Treat because we aren’t sure whether this ad is real or fake. This entire ad screams that it’s a joke. For example, the seller mentions that people give him the thumbs up when he pulls into the track toting this bruise on wheels. No way anyone thinks this bike actually warrants a non-facetious thumbs-up, right? Then again, even three-wheelers were considered cool at one point, so you just never know. Let’s break it down further with supporting and opposing evidence.

The $6,900 asking price. Forget about the crazy-high price tag, this joke is about the number itself. Really fella? You’re going with sixty-nine? Of course, we can’t rule out the possibility of a typo here, making this piece of evidence circumstantial at best.

The liberal use of exclamation points. The exuberance is a sure sign that this is a fake ad—not even a rust collector could get excited over this heap.

Condition is listed as excellent. No way he doesn’t see the seat that’s parted like the Red Sea.

Seller mentions that people have been warning him that he’s going to get hurt. We all have that one idiotic friend who has absolutely zero business on a motorcycle, and we don’t hesitate to tell him so. By the sounds of it, that is this guy, and if he’s the village idiot, it becomes easier to think that he believes those are genuine thumbs-ups people are throwing his way.

Incorrect terminology. It’s a two-stroke, but he refers to it as a CRF, a four-stroke. This is another sign that his mental spark plug isn’t doing a good job of burning the haze, making it easier to believe that this could actually be real.

He wants a scooter. Seller mentions he’s going to use the money to get a new scooter, which confirms our suspicion that he’s not the sharpest knife in the drawer. In fact, he’s probably got the knife upside down and is attempting to hack his way through a slab of spam right now.

Too close to call. We’re throwing this decision over to you, the jury. Real or fake? Vote on it and get back to us in the comment section below.

The “No Joyrides” in the sales pitch is priceless. Like someone is going to take the trouble to get in the car and travel all the way to this guy just to have the privilege of ripping a clapped out KX125 down the street a few times. If he were smart, the seller should encourage test rides—the bike will probably explode with someone else on it, and they’ll have to fork over the dough to get it fixed, which he can immediately use to purchase a set of goggles and a new helmet visor.

In the unlikely event that the bike does indeed hold together at speeds in excess of 15 mph, there still couldn’t be much joy to be had with all sorts of debris flying into your face due to the lack of a front fender. Why is the front fender off, anyway? Is it in such bad shape that the bike actually looks better without it? And speaking of missing parts, where are the number plates? Perhaps they are in the same place as his misplaced good judgment?

This ad is so ridiculous that, just like above, you could make the argument that it’s fake. Unfortunately, one glance at dude’s tattoo and sunglasses-as-eye-protection suggests that he’s a lifer in the no-visor, Budweiser-in-the-sand-dunes crowd. It’s real.

Before we even get to the bike, let’s take a look at the background, which resembles something out of a movie featuring a juvenile with absent parents. We’ve got graffiti, an old guitar neck that may or may not still be connected to a guitar (judging by the fact that there are no strings on it, we’d say this champion smashed it after jamming for the family of possums that lives in the corner), a bumper sticker bragging about beating up someone’s honor roll student, some comic-strip hero stickers, and other assorted bits of mayhem most often associated with 12-year-old boys. The only things missing are a pack of bottle rockets and questionable magazines mysteriously found somewhere in the woods. If Bart Simpson were a real life character, we’re pretty sure this would be his tree house, although that’s being generous to the seller.

Let’s move on to the bike itself. We’re surprised the seller didn’t try to hype up the upgraded exhaust and high-tech pipe hangars. Hey, when you’re the kind of guy that brags about beating up honor-roll students, we’re guessing that a completely incorrect pipe slung from haggard bungee cords is a serious upgrade in your world. We can only hope that one of those bungee cords snaps and one end falls into the spokes while the other gets wrapped up in the seller’s, ahem, junk. The last thing we need is for this guy to procreate.

These types of scooters are like a crazy ex-girlfriend. They’re fun to play around with, and they’ll even provide a few months of reliable, eye-popping entertainment, but sooner or later the pack of Keystones will start to wear off and you’ll realize what you’ve been riding.

Judging by the seller’s sales pitch (“Really fun but we just don't use it like we used to so needs to go”), we’d say that’s exactly what’s going on here too. And from the looks of this dinged up disaster, we’d say it’s been ridden hard and put away wet more often than not. Seriously, what’s going on with that rear end? It definitely hasn’t been cared for, and in its current condition it’s certainly not going to get you where you want to be. We’d tell you to stay away, but it’d be useless. You’ll just have to learn this lesson for yourself.