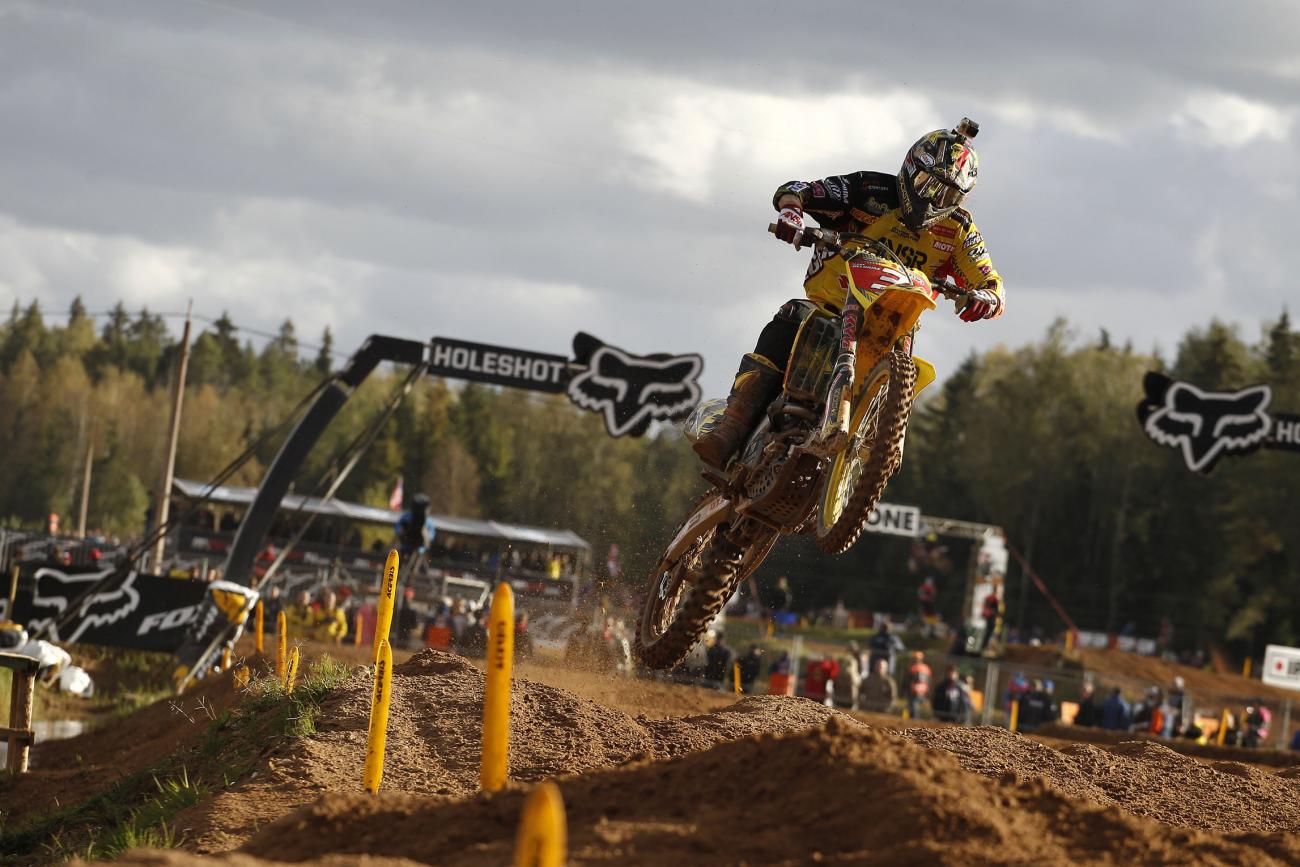 “It’s racing.” A truly horrible cliché that people in the sport tend to wheel out now and again to justify the unexpected or the unpredictable. At the halfway stage of the 68th Motocross of Nations in the cool sunny breeze of Kegums, Latvia, Team USA were experiencing some of the darker side of this ‘racing’ phenomenon. A heavy crash for Star Racing Yamaha’s Jeremy Martin in MX2 and a first corner tumble for GEICO Honda’s Eli Tomac in MX Open momentarily left the squad staring at the demanding abyss of entry through the B-Final heats on Sunday morning. MXGP rep, Ryan Dungey, took his Red Bull KTM to third position earlier in the day to bank some valuable and essential qualification points.

Tomac’s attacking and forceful recovery to eighth place in the last moto of Saturday was nervy stuff for followers of the Stars and Stripes but did the job and placed the 2011 champs in eighth for the gate pick (twenty-eighth for the second rider). Martin was absent from the teams presentation to the fans on Saturday evening with Team Manager Roger DeCoster stating that he was resting following the accident that occurred while he was chasing fifth position. Staff at the Yamaha awning said the 250MX champ was a little beaten-up but should be fine for the motos on Sunday.

Kegums was sunny and busy – for such a flat and compact venue – and the sand was as soft as Grand Prix regulars have seen in the five years that the FIM series has been coming to this area of northeast Europe. The terrain is shifting and rutty in places but really not that deep; nothing coming to the sand found in the Benelux region and a paddling pool compared to the depths of Lommel in Belgium. The hard base means it can still be slick. Riders started on sand scoop tyre profiles and quite a few were fiddling around with settings. Strijbos was an example and tweaked his front suspension to find better traction on the works Suzuki, discovering a decent solution that enabled the 28-year-old to get off the line and escape with the last qualification heat of the day. The Belgian was strong and more resistant than Britain’s Dean Wilson in second place but the eye-opener for the day was provided by Paulin and Cairoli.

The Frenchman is something of a Nations specialist. He won his first major race on a 450 at Franciacorta in Italy in 2009 and then also in front of the French fans at St Jean D’Angely in 2011. On his sixth time representing the Tricolore Paulin blasted to the front in MXGP and seemed to make light work of Ryan Dungey, Alex Tonkov and Jeremy Van Horebeek. His level of performance was only matched by the degree of excitable glee exulted by Cairoli in MX2 who set lap-times some three to four seconds faster than those when he won at Kegums on his 350SX-F in the 2013 Grand Prix. Rockstar Suzuki duo Jeremy Seewer and Glenn Coldenhoff both took turns to lead but the experience and fire demonstrated by the eight times world champion was unmatchable.

A worthy nod to Russia and Wilvo Nestaan Husqvarna’s Alex Tonkov who recovered from third degree burns to his right arm, sustained in Mexico and the final GP of the year two weeks ago, to be able to compete and mix it up at the front of MXGP on the FC350. His race was curtailed after tangling bars with Van Horebeek. The Belgian apologised afterwards for his role in the incident. Slovakia’s Tim Gajser, HRC’s MX2 wonder teenager, was rapid on the works Gariboldi CRF450RW in MX Open and his third place behind Wilson was startling considering a practice crash when a backmarker scooped his line had led to a broken rib, painful neck, FIM concern and a couple of painkillers.

Half-time then and if anything has to be taken from the first day of activity in Latvia then the usual suspects of Belgium and France are looking potent threats for silverware. The British trio of Wilson, Tommy Searle and Shaun Simpson seem to have the capacity and consistency to shoot for the box. As for Team USA a lot will depend on Martin’s confidence and ability to be able to source that one good result from two runs in MX2 on Sunday. It will then mean that Dungey and Tomac have little margin for error. Kegums involves a short and flat run to a 180 degree right first turn. It’s tricky stuff; perhaps the hardest and most decisive opening corner at the Nations for some years. It means so much will be decided in those first few hundred metres tomorrow.