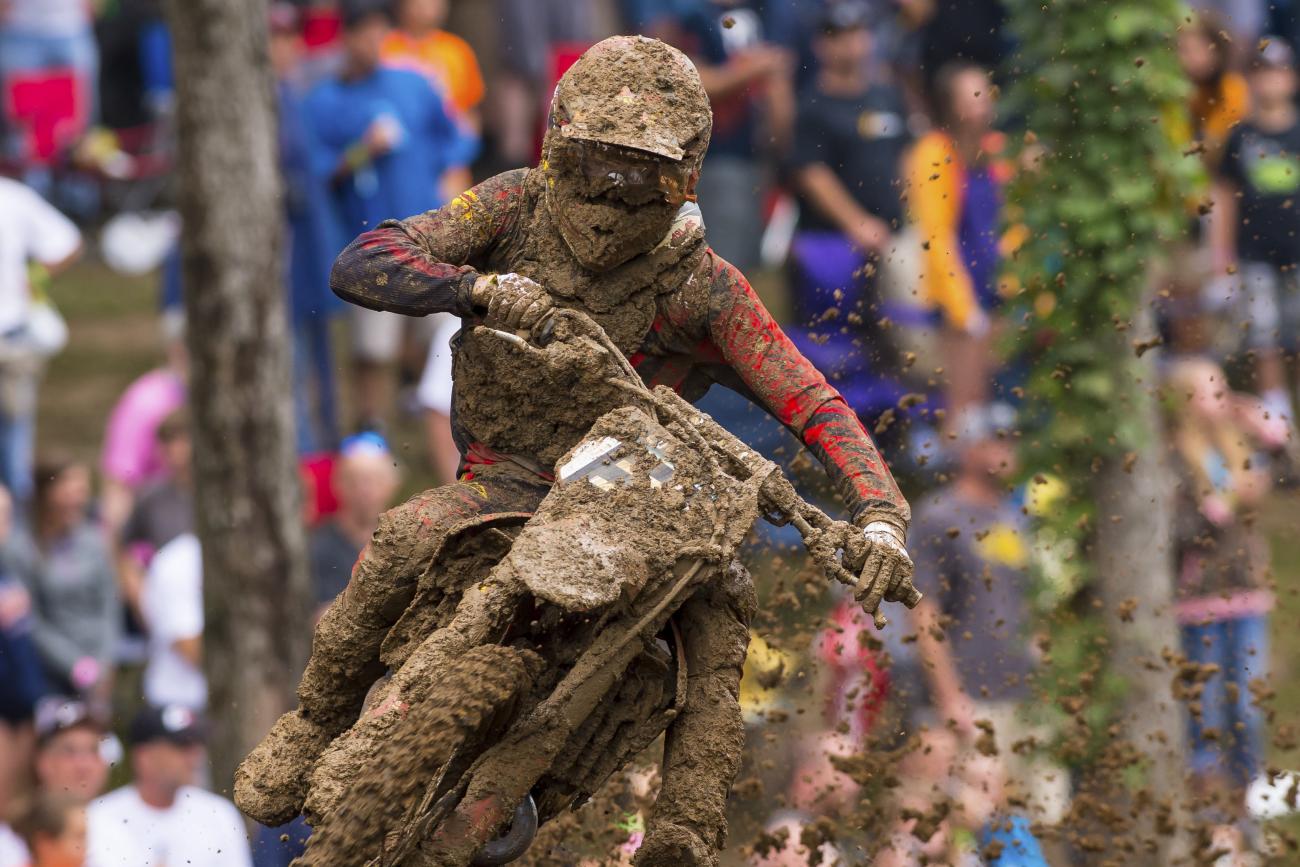 3 on 3 Questions after Indiana

1. Did Ryan Dungey's title hopes hinge on that muddy second moto, or was the damage done earlier in the season?

Jason Weigandt: Definitely done earlier in the season. It's a bummer that the points aren't closer heading into the finale, as this was shaping up to be an amazing battle. No way Ken Roczen gains 13 points on Ryan on a dry track, but that's racing and you have to deal with it. Ryan can't complain, he lost 26 points to Roczen through the first half of the year, which has made all the difference. That said, I'm still bummed this wasn't closer coming into Utah, because the hype would have been crazy.

Jason Thomas: I think it was a bit of both. Certainly, he hurt his chances earlier in the season by consistently losing points to Roczen, but he had fought valiantly to give himself another chance. Unfortunately, his room for error was basically nil as we came down the stretch. He needed to beat Roczen every remaining moto, and that second moto derailed his hopes. Regardless, it's a bummer that we don't have that showdown looming this Saturday. It could have been one for the ages had the points stayed tight.

Steve Matthes: It’s a combination of both. Like we saw with James Stewart in a few different supercross years, when you dig a deep hole early, your margin of error becomes less and less. So when you have a moto like Dungey did in the second one this past weekend, all your other stuff adds up and you have to say goodbye to a title. Here’s the thing, though, I just wrote Dungey dug himself a hole, and he did, but looking at the points Dungey’s gotten two fourth-place finishes through the first twenty motos. That’s it. Other than those fourths he has been on the podium in the other eighteen motos!

Bottom line: There wasn’t much more Ryan Dungey could’ve done. Well, except finish where Kenny Roczen did, I suppose. The point is, Dungey was amazing this year, and ninety-nine times out of 100 his results bring home a championship. But not this year; Roczen was a hair better. And I think he’ll be the 2014 450 champion because of that fact.

2. From double DNQ to champion. Have you ever seen a turnaround in one season like Jeremy Martin?

Weege: Considering he wasn't hurt or ill, I can't think of anything quite like this. The beginning of Trey Canard's 2010 season wasn't stellar, but he wasn't DNQing races, either. Micky Dymond and Doug Henry had illnesses to deal with when they were defending their 125 national titles in 1987 and 1994, so maybe that's the closest. But those guys were racing 250 supercross at the beginning of the year, so it's hard to compare. JMart was racing the same dudes he just beat, and they were beating him badly. He wasn't even injured or anything! Yeah, he had some crashes and bad starts, but he just wasn't on the pace, either. I think a lot of it was actually part of the acclimation to the new YZ250F, and clearly Martin and the team figured the bike out between the East Region kickoff in Dallas and Glen Helen. I know he did come back to win the Vegas finale, but I'm now wondering: is he just way better outdoors than in supercross? Hmmmm.

JT: I don't remember any scenario quite like this, but I don't think that's the only factor. I think Jeremy is simply a much better outdoor rider. That's not to say he isn't good at supercross, but he isn't THIS good at it. Winning a national championship with three motos to spare is pretty special, and I just don't see that kind of dominance coming for supercros. He will get his chance in 2015 to prove me wrong, but for now that's how I see it.

Matthes: I read an interview with Jeremy Martin about halfway through his 250SX series where the interviewer mentioned Martin’s “bad luck” in the early part of supercross. I beg to differ. It wasn’t bad luck; he just wasn’t riding that well. He had crashes, bad starts, and there were times when he lined up in the LCQ that he seemed to buckle under the pressure. In short, it was a disaster. Somewhere along the line, after many, many, many injuries knocked out the front-runners in the series, Martin won the final race. In my eyes it didn’t mean a lot, but good for him to get that supercross monkey off his back.

But, wholly crap was he a different guy come Glen Helen. Ripping off the first five moto wins was amazing. He didn’t fall into those wins. They were straight-up domination by the #19. It’s very bizarre, but in a good way for Jeremy. As I wrote, he’s perhaps the most unlikely 250 champion since Ivan Tedesco in 2005 and before that, maybe Mike Kiedrowski in 1989. This title was fully deserved; Martin was the best rider week in and week out. It was unexpected and weird, but in the end there was no doubt about it.

3. Name a surprise in each class in the mud.

Weege: It was cool to see Chad Reed doing well. I think he's kind of checked out on the season, and I didn't think he'd be too pumped about grinding his way through miserable conditions all day. He did, and he was pretty fast. Not only was this his best result of the year, but you could see he was digging deep and trying to make passes on guys even while riding without goggles. Looks like years of mud racing experience pushed him to a different level for the weekend.

JT: I was really impressed by Mitchell Oldenburg's early moto speed. He was running a strong second place and even pressuring Roczen for a bit. Too bad his bike blew up toward the end, because for a few laps he was on an elite level.

In the 250 Class this has to be Jessy Nelson. I know this is the obvious answer, but when a guy goes out and absolutely dominates a moto for his first win, credit is due. We had foreshadowing of this at the Thunder Valley National in Colorado earlier this season, but he finished the job in Indiana.

Matthes: Obviously Jessy Nelson is one of them because he’s from central California, and you don’t expect him to just rip off a moto win and lead a bunch of laps in the other one. But everyone said that, so let’s go with Joey Savatgy and his second overall. Sure, they were via 4-3 scores, but have you been watching the races lately? Savatgy’s been  really good. He’s consistently in the top ten and looks to be a rider on the rise. I like Joe-Dawg’s chances to stay with the Rockstar Husky team for next year. He’s perhaps a better supercross guy than motocross guy, but right now he’s really opening some eyes in mx.

My surprise in the 450 Class would be Weston Peick. The bizarre strategy of not doing ONE LAP in qualifying and taking the fortieth gate pick was something else. The fact that he’s from Southern California, and with him riding a limited schedule the last few years, you know he’s not going to be a mud specialist. Peick made the best of what he was dealt with two top-ten rides and rode near the top five all day long. After seeing his non-qualifying qualifying tactics, I would definitely have not put Peick inside the top ten. I guess he just doesn’t believe in qualifying or mud.