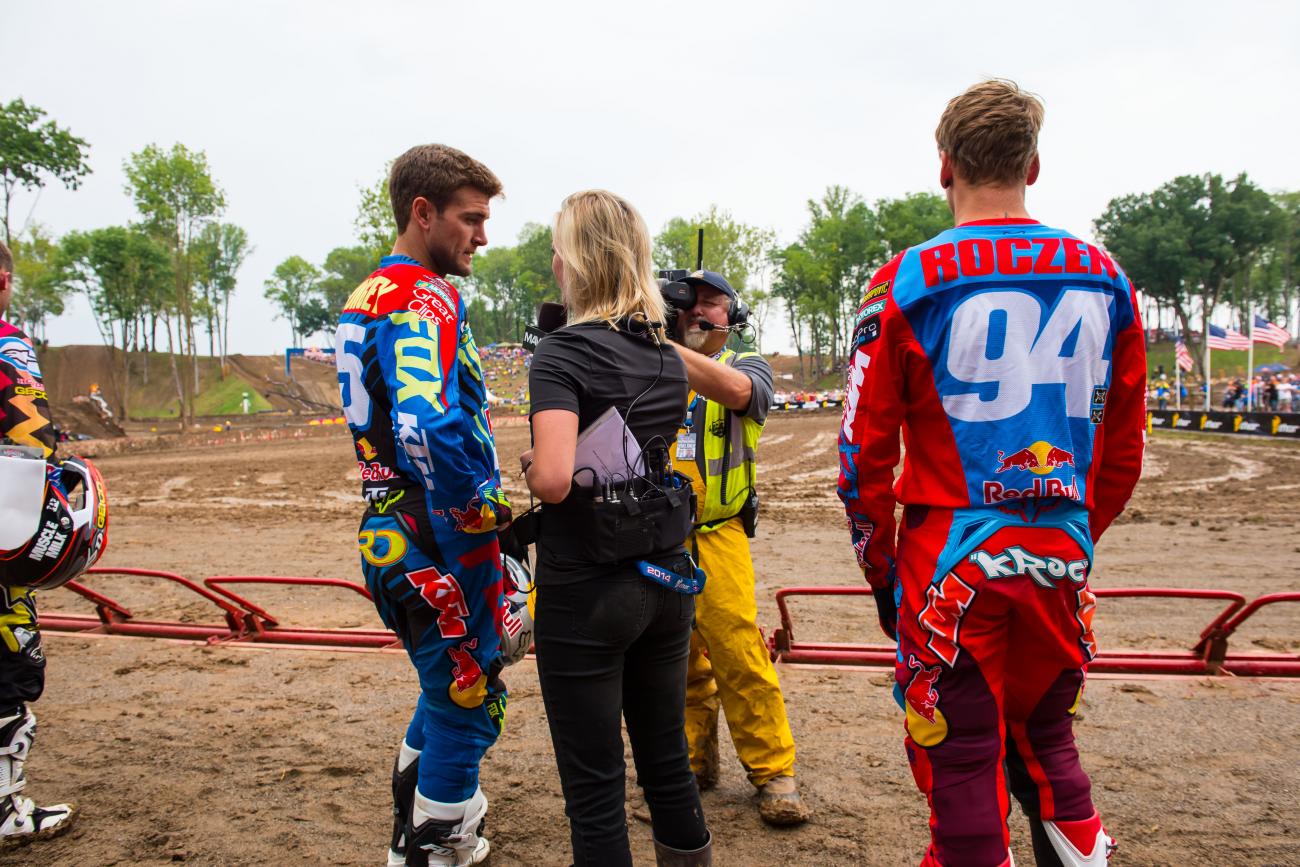 Breakdown Calm before the Storm

Coming into last weekend, there were a myriad of factors that I considered crucial as to who would win this 2014 Lucas Oil Pro Motocross Championship. Who would perform better in the mud was not one of them. It just goes to show how many different variables determine the outcome of a twelve-round championship that spans the continental United States. It had been a while since we experienced a full mud race, and to be honest I wasn't quite sure whom it would favor.

Mud should present no problem for Ryan Dungey. Growing up in Minnesota, inclement weather is nothing new. I’m sure he spent many weekends of his youth slopping around in the Midwest muck. His come-from-behind ride at Southwick in 2011 was further proof that he is very skillful when conditions deteriorate. In short, he should have been ready to capitalize. He had all of the momentum on his side and looked to have Ken Roczen on his heels. All he needed was that final knock out punch in the final four motos.

The mud had to be a nice change of gears for Roczen. He had been on a slide as of late and had given up a huge portion of his points lead back to his teammate. He seemed to be as bewildered as anyone… He just didn't have the same fire as early in the season. His practice lap times weren't as impressive and he struggled as the day grew long. Things certainly weren't going his way, and I don't think he was carrying much confidence into the Hoosier state. He needed something, anything, to turn this ship around, and that's precisely what he got.

Now, for those of you who have never been to Germany, let me fill you in on their weather pattern. Other than a two to three-month window of what could be interpreted as a semblance of summer, it is cold, dark, and dreary a depressing amount of the time. Spring, fall, and winter are accompanied by a lot of snow and when it's not snowing, it's raining. This is even truer for the eastern portions of Germany, precisely where Ken Roczen grew up. The ominously dark skies had to seem like a ray of sunshine for Roczen's hopes of salvaging this championship. He said as much before the races began on his social media page, acknowledging that the muddy conditions helped calm him.

I didn't put much stock into that, but once the gate dropped, it was clearly true. He rocketed out to an early lead and never looked back. He took command of the moto and with it, sending a message that the red plate was still his for a reason. Dungey, to his credit, rode solidly to finish second in the first moto, but giving up three points was certainly a tough blow with only three motos remaining. Entering the second moto, everyone knew what was at stake. Dungey needed to not only beat KRoc but also to have others do so as well.. Roczen, on the other hand, just had one goal: stay in front of the #5 bike. The position was irrelevant as long as his bike crossed the finish before his teammate's. Much like the first moto, Roczen screamed out of the gate to the front, along with Team Honda Muscle Milk’s Trey Canard. Dungey was mired in the pack and with the poor conditions, had to be in panic mode. This was, in a nutshell, how the day went. Roczen nabbed the starts and had smooth sailing while his championship rival Dungey struggled. Dungey seemed unable to settle down and move forward in the second moto. Whether his frustration was leading to more mistakes or he just had a bad moto, the damage was considerable.

Coming into the day, Dungey had everything going his way and looked to pour more coal into the locomotive. The entire outlook is reversed now. Roczen has stretched his lead back out to nearly a full moto, leaving Dungey in need of a miracle. It was a colossal turn of events and truthfully, no one saw it coming. That, as they say, is why they run the races.

If Roczen goes on to win this title, what will we look back on it and remember? So many championships have an underlying theme. Carmichael's titles were pure dominance, Stewart's 2008 season was all about perfection, and Reed's 2009 title was the missing entry for his resume he had always chased. Dungey and Villopoto both shared their claims to superiority over the following seasons, but what about 2014?

Will we think of Roczen's winning performances early in the season? Will we even remember his mid-season struggles that almost let this get away? I will remember that when everyone was counting him out coming down the stretch, he took advantage of the adversity that Mother Nature hurled at the field. He took a deep breath, remembered his strengths, and put in a winning performance that will put the final touches on this outdoor season. As the storm raged across the Indiana skies Saturday morning, Roczen's inner clarity shone through. On an ugly August day, 6000 miles from home, he quieted all of the noise around him and proved worthy of being the champion.