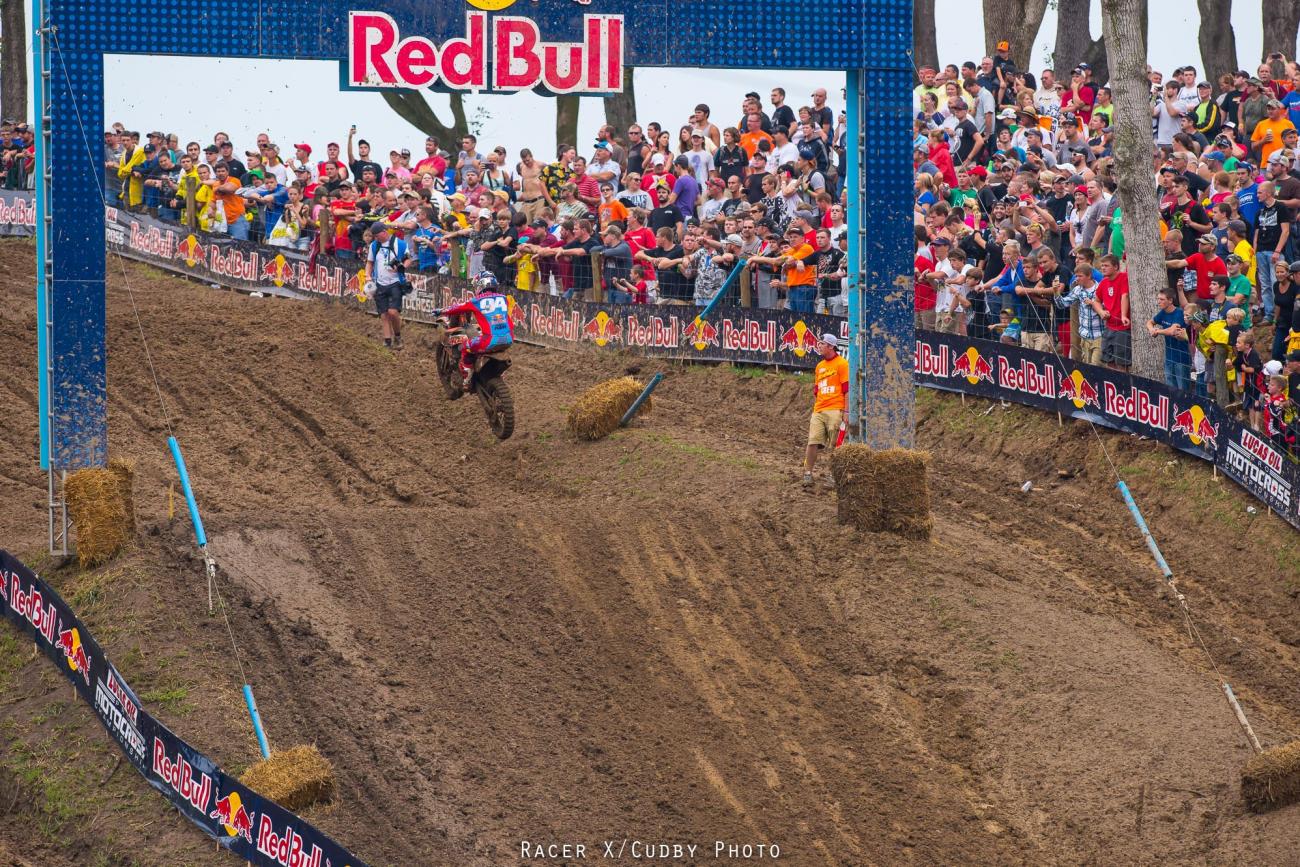 Last week we tapped GEICO Honda’s Wil Hahn to give us his take on the action from Unadilla. He did such a great job we decided we asked him to do it again, and he agreed. Read on to for Wil’s words of wisdom on the nastiest National of the year.

Ironman Raceway is a new track, and that’s always fun. It brings the excitement back, that rookie feeling. Most rookies coming in haven’t been to most of the tracks. Some have been lucky enough to race on amateur day, but for the most part the National tracks are new and exciting to them, and going to a new venue brings back that feeling. It puts everyone on a level playing field too, especially on a track like Indiana that nobody has ever ridden before. It can make going race pace after just a couple qualifying sessions tricky too, especially in muddy conditions! On a day like yesterday you have the same amount of time during qualifying, but fewer laps to prepare because lap times are so much longer. But adapting it’s what we’re programmed to do, and we do it in supercross every weekend so it’s not that big of a deal. We prepare for this kind of thing, and it’s not really that much harder to find a good setup. You can use your experience to compare it to some of the other tracks. For example, Indiana looked kind of like a muddy High Point, so we can use that experience to help.

Rain and mud aside, the track looked very cool. I checked out the press day pictures and videos and it had cool elevation, big jumps and looked like it would have been a very fast racetrack had it stayed dry. It didn’t stay dry though. In fact it’s been a while since I’ve seen a track like that. I was blown away at how much it changed after the rain. It started to come around a little bit, but then it rained again—it never really had a chance to dry out.

It’s kind of cool to see conditions like that though. We haven’t had that all year, and even in supercross we didn’t really have any terribly muddy tracks. I thought it was really cool to have something different, especially with the championship on the line. Sure, the last thing you want is to win a championship by default, like if someone blows a motor or something, but luckily that didn’t happen, and days like today are where you really see the strong rides—you have to be good in all conditions in order to be a champion.

The effect of sloppy conditions isn’t limited to the top guys either. Yesterday guys like Tucker Saye, Todd Krieg, Cody VanBuskirk, Shane Sewell, Mike Stender and Kody Kamm all scored their first points of the year. Mud levels the playing field somewhat, both mentally and physically. It’s a mindset, and as daunting as yesterday’s conditions were, some guys were looking at the mud as an opportunity to go out and get their best results of the year.

There’s a fine line when choosing your strategy though. You can go out with the mindset that you’re going to relax, but then sometimes that ends up not being aggressive enough. Other times you’ll try to go fast and it’s just too slick. For me, it’s just one of those things where you have to feel it out and adapt to the track, and Ironman Raceway required patience. If you’re not patient you’ll make mistakes and you might even crash, which is extra costly in the mud. If your hands get covered with mud it makes it hard to hold on. Or maybe you ruined your vision, or you landed in a puddle and now your hands are all wet. There are a lot of factors that can make crashing in the mud a very bad thing.

It can clump mud on your bike too, which is probably already covered to begin with. The extra weight really changes how your bike rides. The first lap everything is normal and it feels just like it does during the week, but the next thing you know you’ve got thirty pounds of mud clinging to the bike and fifteen glued to your body. Your helmet gets heavy, your gear gets heavy and your suspension doesn’t work like normal. You try to make adjustments for that before you go out, but either way it’s going to feel weird. Then sometimes it will rain during the race and wash off all the mud!

This is one of the reasons why it’s more important than ever to get a holeshot when the conditions are like they were yesterday. When you’re up front you don’t have roost getting all over you, your bike, your hands and your controls. Another danger is that your radiator gets packed full of mud and isn’t able to cool the bike. That’s a quick way to lose a motor.

It’s also important because it’s so much harder to make passes when it’s wet. We saw that with Eli Tomac and Brett Metcalfe. Eli was all over him but every time he’d get out of that main line it was just so, so muddy and it would slow him way down. We saw it with Ryan Dungey too. By the time he got into second in the first moto I think Ken Roczen already had twenty seconds on him. It’s not that Dunge was riding bad, it’s just that you don’t even give yourself a chance if you don’t get a good start.

Your vision goes away quickly too. Guys were tossing their goggles right away, and the conditions have to be horrible to make you ditch your goggles. It’s always a bad idea though. It might seem like the right thing to do, but it’s not. I’ve regretted doing it every single time. Once they’re off you’re taking all kinds of rocks and mud and you can’t see anyway. Then you end up having to put your head down just to block all the debris and you find yourself taking lines you don’t want to take and putting yourself in a position you don’t want to be in.

Fortunately we have a lot of tricks we use to help combat the mud. You always see guys with the goggle lens sticking off their helmet visors, and that provides a bit of extra protection from water and airborne mud. Some guys stuff towels in their pants to wipe their hands off with too. We also cover the bike up with a ton of silicone spray so the mud slips off instead of sticking. We do the same thing with our helmets and gear. Mid-moto rain can help—it helps keep things clean and light—but it makes the slickest parts of the track even slicker. It also gets between your tear offs or roll offs and goggle lens and obscures vision.

Now that we’ve talked about all of the different things that can happen in the mud, it’s time to take a look at the five guys in each class who handled it best.

He proved today that it’s his championship to lose. He showed that he wanted this thing and he put himself in a good position in both motos, right out of the gate. And at this point expect him to do the same thing next week, at least in the first moto.

Another great ride from Trey. Again, it’s something that everyone is happy to see. He rode good all day. He had some problems in that first moto, but he was on it all day.

Definitely not a day that Ryan wanted. If fact it’s exactly what he didn’t want to do. Then again, it’s one of those challenges that we face in the outdoor series—you have to ride in these conditions. But he’s got nothing to lose now and I’m sure he’ll be strong in Utah.

Some awesome scores for the overalls here! But at the same time that’s the way it goes when it’s muddy, and it’s pretty awesome to see a guy who was racing GNCCs a month ago go out and get a podium in a moto. I’m a big fan of Ryan, and it’s amazing to see. I don’t think anyone expected him to finish up there.

Solid, solid, solid. That whole second moto I thought he was going to come up and battle with Ryan a little bit. Good year for Shorty. He’s just solid every week.

Again, solid like he has been and he was able to finish up there in both motos. He’s great with throttle control and is one of the best riders there is in those conditions. I don’t think it was a very smart decision to leave him off of France’s MXoN team.

Wow. He was injured for the first part of the series but he’s just been showing more and more speed, especially these last couple weekends. He’s getting stronger every time out and it’s showing.

I know that this wasn’t the second moto that Jessy wanted to follow up a win with, but it’s cool to see him win and deliver the guys over at TLD their first moto win. It’s always a cool feeling to get that first win and it’s something he’s never going to forget. He actually tied for second overall in moto points, which is probably frustrating for him, but he probably wanted that whole second moto to go better regardless.

The scores are all over the map! It’s hard to be consistent in the mud. He pulled in almost right away on that first lap and I thought he was going to finish pretty far back but he worked up to ninth. He must have had an issue with his googles, hit a big puddle or something like that. I was confused when I saw it, but it was still a pretty solid ride.

A consistent day. Obviously he probably wanted to push a little harder and gain some points on Jeremy Martin but today wasn’t the day for that. But it’s only his second year as a professional and he’s looking like a veteran out there.

Just like last week there were some great rides yesterday that need to be talked about. I know I already mentioned Ryan Sipes, but this was just such an awesome performance I have to mention it again. I don’t even think he was supposed to be out racing any Nationals but he did it anyway and got an amazing result. He got some great exposure for his sponsors too, which is always cool. Mitchell Oldenburg also had another good day going. He qualified well and was up there in the first moto but ended up having some bike issues. He’s getting better every weekend, which is cool to see.

Every single privateer that went out there and raced, especially the guys who got points, are heroes too. Days like yesterday are rough, and it’s admirable to go out there on your own dime and just destroy your bike. The fans that stuck around in that weather were the real winners though. It was awesome that they stuck around all the way through the last moto to cheer those guys on.

So with the 250 Championship wrapped up and Dungey trailing Roczen by twenty points, what can we expect next weekend? You might think the guys will just go out there and go through the motions, but that’s not the case—there’s always something to prove. We won’t have another series until January and you always want go out on a high note. Finishing off the season strong feels a whole lot better than putting in a lackluster performance, so you can expect some aggression to come out in Utah.