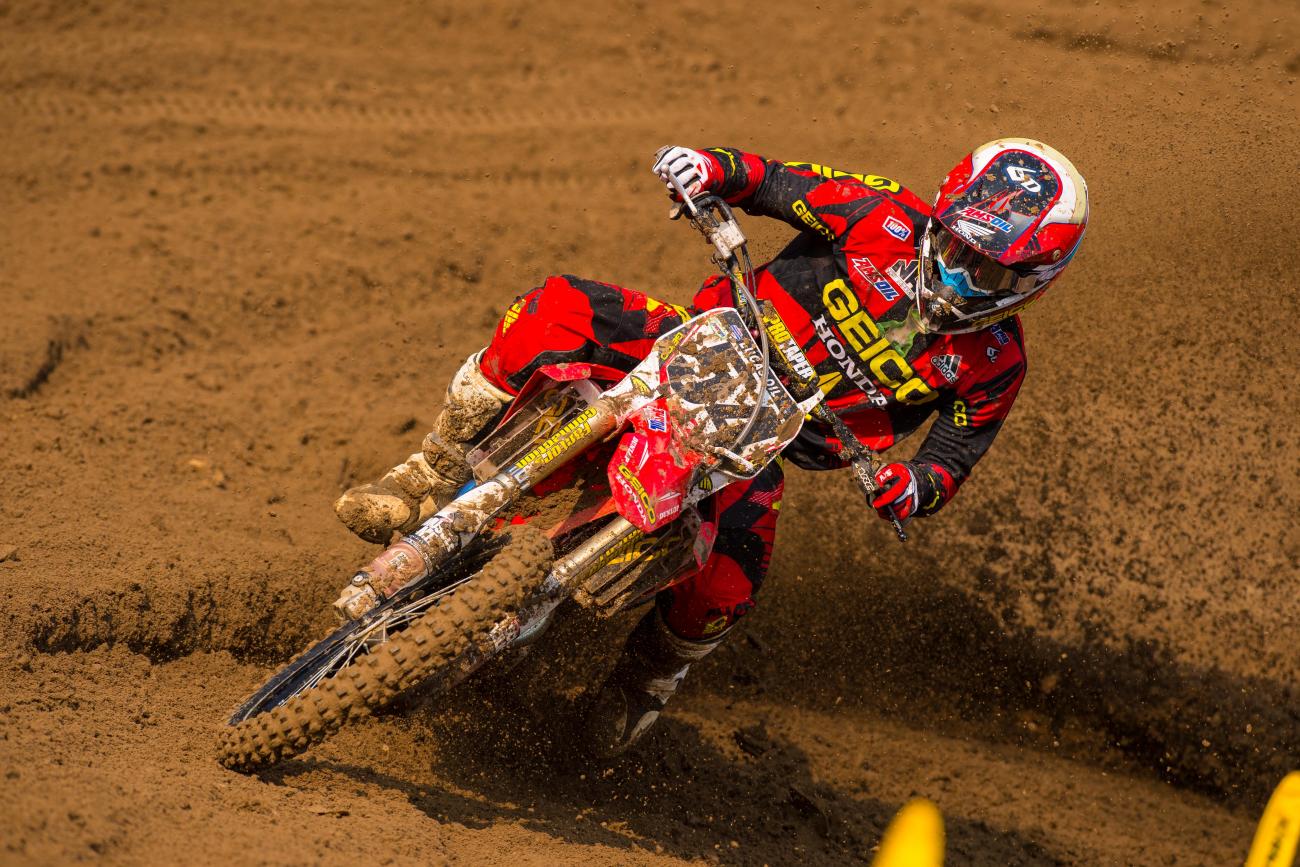 The second 450 moto presented one of the first Ryan Dungey versus Eli Tomac battles we’ve ever seen. Here’s what Dungey thought of the race: “That was probably the first time [we’ve battled]. It was good; I know he’s a fit rider, and he’s going to push it all the way to the end. I felt like we were hanging the same pace, and it’s tough. When we’re running the same pace, it’s hard to make up any time, and then the lappers got in the way. But I just want to make this clear—I’m not making any excuses. He got through them really good and I didn’t, so I made that mistake. He opened up that gap, and it was hard to close from there. Then I got together with one guy and ended up going down. I think the outcome could have been close to the same, but it would have been nice to take it down to the wire. At least, that’s what I was hoping for, but he rode a good race today.”

So much talk about the home track riders with Dungey and the Martin brothers (this is like Southwick in the Henry/Down heydays, like when they swept both classes in 1998). Does it really give Dungey an advantage, though? “For sure, I raced it a lot growing up,” he said post race. “Sixties, 80s, 125s, and that’s about when I started to move down south and spend my winters in Texas and Florida and stuff. So, it’s been maybe ten years that I’ve been racing it just one time a year, just at the national. I don’t know how big of an advantage it is—the course has changed a little bit and the dirt has changed. The base has gotten harder. But it’s just beautiful here. It’s a good track.”

Christian Craig continues to do well in a guest appearance with GEICO Honda on a 450. Millville was his best yet, as he scored his first top-ten with a ninth in moto two. Craig will race Washougal this weekend, and that will be it for his GEICO ride, although he might truck down to the Indiana National by himself. By the way, he is literally working a full-time construction job while fitting in training and riding after work. Pretty impressive!

It was also Craig’s 23rd birthday on Saturday, so the GEICO Honda truck had a nice collection of #54 birthday cupcakes. We put them through the Racer X Tested ringer, and they were good.

Even without Craig, the GEICO Honda pit will be packed at Unadilla. Amateur grads RJ Hampshire and Jordon Smith will make their debuts, and Zach Osborne will be back in action. Osborne told us this week he’s back on the bike. Wil Hahn, by the way, says he’s close to doing some riding, but isn’t quite there yet.

Jake Weimer returned to action for Monster Energy Kawasaki, saying he felt good enough doing thirty-minute-plus-two-lap motos at home. “But the tracks in California are nothing like a national,” he told us on Saturday morning. Well, the Millville track—and especially the track’s sand whoops—was too much, and Weimer couldn’t go in moto two. We think he’ll probably miss Washougal, too, if this superb hard-hitting interview is any indication.

Rough day for Toyota/JGR Yamaha’s Justin Brayton, who said he felt “low on energy” all day. He got good starts, and even made a quick pass on Eli Tomac in the second moto to take the lead, but went back to 10-15 scores by the end of the day. Our medical diagnosis/guess? Brayton’s not getting any sleep now that he has a new baby at home.

Strange situation for Christophe Pourcel, who accidentally bumped the engine mapping switch on his bike with his knee in moto one, setting it into the wrong mapping. He said the bike was slow after that, and he couldn’t really fight. He held on for third in that moto after yielding to Marvin Musquin. He finished sixth in moto two. Pourcel told us after the race he feels much stronger than he did in his previous seasons here, as his internal injuries have healed up quite a bit, and he’s working hard. “I even sold my jet ski,” he joked. “These guys are just really good, and I’m still getting used to the bike. I spent twenty years racing Kawasakis, so I’m still getting used to it.” Pourcel says he doesn’t have any deals in place for 2015 yet, but he is enjoying his time at the races.

Pourcel clinched the season’s Oakley Bomb Award for fast qualifying at Millville, since he has six fast qualifying awards already, and no one can top that. He’ll get an Oakley watch for being season champion. Unfortunately, he hasn’t been able to bring the weekly Bomb trophies home, because the TSA keeps confiscating it at the airport. Hmm, they don’t let a Frenchman carry a thing that literally says bomb onto the plane? After the day at Millville, we spotted his trophy from this weekend sitting on the couch in the MX Sports race trailer. Guess he’s going to get this one shipped home.

Let's take a look at the lap charts!

Monster Energy/Pro Circuit Kawasaki’s Justin Hill continues to deal with a nagging arm injury suffered at Muddy Creek. “I am just so bummed right now, but I have to be smart about this if I want to keep my season going,” said Hill in a team release. Hill had to withdraw early in moto one at Millville and was a DNS for moto two. His status for his home race at Washougal this weekend has not been determined. “I’m still not sure exactly what’s going on but it just didn’t feel right today. I’ll get checked out as soon as I get back home, but I’m going to do everything in my power to make sure I’m on the line next weekend at my home race.”

Dean Wilson finally had the breakout race everyone—including himself—had been waiting for. “It’s taken longer than I had hoped to get back up front, but my fitness and endurance are starting to come together and I think that will be important in battling with those guys up front,” said Wilson in a team release. The former 250 National Champion had season highs of fifth—in both motos—and fifth overall.

Another rider still working his way back from injury is Rockstar Energy Racing KTM’s Joey Savatgy. “Seventh overall for the day is definitely good and a step in the right direction,” he said in a team release. “I want to get that momentum going.” Savatgy had his best ride of the season finishing seventh overall via 8-9 moto scores.

It was a tough day all around for GEICO Honda. The one bright spot came from Justin Bogle in the second moto when he wrestled the lead away from Christophe Pourcel for two laps. Unfortunately, a crash later in the race led to a thirty-second place moto score. “I started making mistakes after a couple of laps, and the bike got tight again. Unfortunately, I had a pretty good crash late in the moto and didn't end up finishing,” he said in a team release. We heard Bogle knocked the wind out of himself but was otherwise okay.

The finishes weren’t there for Zach Bell, but with as many setbacks as he’s had, he’s just happy to be healthy. “After all these setbacks in the past, I just want to make it through every race and build on that,” said Bell in a team release. “This weekend was better than how the last few weekends have gone, where I had some falls and it put me in the back early on." Bell finished eleventh overall.

Troy Lee Designs/MAVTV Shane McElrath returned after missing the last six rounds due to a back injury. McElrath “tightened up” a bit in the first moto and fell back to seventeenth after a good start. A fifteenth in the second moto helped McElrath to seventeenth overall in his return.

Factory Metal Works/ Club MX Jace Owen had a career finish at Millville. The rookie out of Illinois captured his first career top fifteen finish en route to sixteenth overall. “Making huge leaps and bounds. Went 18-14 on the day with my one and only bike I now have. Practice and race all in 1. Solid 70 hours on it,” said Owen on Twitter.

The Rippah was back! Jimmy Decotis made his return to the 250 Class at Millville and went 19-26 for twenty-third overall. “Was nice to be at the races again! Big thanks to everyone who supports me. Still got some work to do,” he said on Twitter.