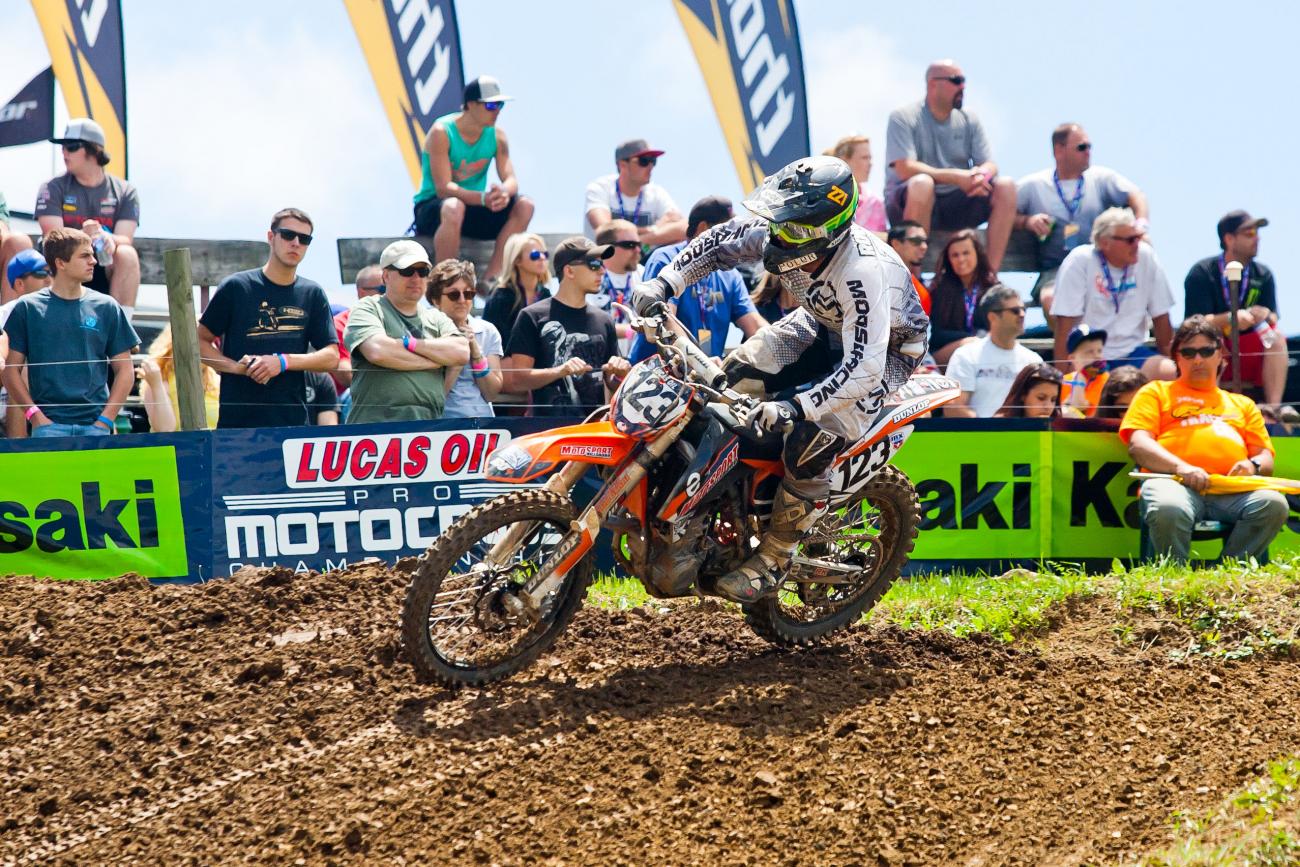 We’ve all heard the old adage: ride to live, live to ride, but very few of us can actually live in accordance. This isn’t the case with Kevin Rookstool, who legitimately does both just about every day. He’s raced multiple forms of racing, but most recently he’s dedicated himself to competing in all twelve rounds of the 2014 Lucas Oil Pro Motocross Championship. We caught up with this dirt bike mercenary to get a better insight of what it’s like to be a self-employed racer.

Racer X: You’ve got some serious range as a racer. Fill us in on the different disciplines you’ve raced over the last few years.
Kevin Rookstool: I rode some supercross last year but ended up getting injured. I raced motocross in 2012, I’ve been racing EnduroCross, I rode the WORCS series, and some miscellaneous money races up in the Northwest just to make money to survive and keep racing.

What motivates you to race in so many different arenas? Is it to make money, or is it because you’re just a motorcyclist to the bone?
A little bit of both. For one, I can do it, so I do it. The other one is to survive. If I’m racing every weekend, at least I’ll have somewhat of an income. I have some help to get to the races, I definitely need more, but I have a little bit of help. That makes a huge difference when it’s not all coming out of my pocket. A lot of it still is, of course, but it helps. I keep going because I just love it, really. I’m definitely not doing it to get rich!

How does that saying go? How do you make a million dollars racing dirt bikes? Start with two million.
Well, I’m making hundreds! [Laughs] Before Muddy Creek the rear end went out on my van, and it’s going to cost me $2500 to fix, and I had to go rent a truck to tow the trailer to Tennessee, and that cost me $1100. That’s the kind of stuff that throws a wrench in the chain.

If you had to pick a discipline that defines you, what would it be?
I’m just a dirt bike racer. I don’t really care. I’ll go race a GNCC, an Enduro, whatever. I did the World Super Enduro in the winter and that was pretty cool. Only problem was that I was riding a different bike in each country. It was always a KTM, but at one round I’d be on two-stroke, then a four-stroke, at one I rode a 2011 350 with a bunch of hours, all sorts of bikes. I didn’t have my suspension with me or anything, I was just running it. I led a bunch of main events, though, and I got fourth in one of the main events in Mexico; there are three main events. I got some top tens, and those are the best off-roaders in the world in that stuff. Those Europeans are no joke in the off-road world!

What’s the toughest?
They’re all tough! I got injured last year in March and broke my leg pretty bad and missed pretty much all year. I started doing EnduroCross again in October, but I wasn’t up to par or anything. But I just started with moto again this year, and it’s been hard to get back into the swing of things. With motoing, the conditioning is the hardest thing. With EnduroCross, it’s a beat down, but it’s just different. There’s no rest and you’re going slower, but you’re using so much of your body to go around the obstacles. It’s like ten minutes of hell. With motocross, it’s all good until the last half of the race! Then with WORCS racing, and I haven’t done any WORCS in the last few years, but when I was doing them it was a completely different kind of tough. You’re trying to pace yourself for two hours but you’re still going 90 percent. It’s all really hard, and there’s not one that’s easier than the other. They’re all very different.

How different is racing EnduroCross at the X Games versus the regular EnduroCross series?
They’re very similar, but I think the X Games tracks are more entertaining. They’re jumpier and they’re not as technical. Some of the EnduroCross races are so technical, and in my opinion it should be a little easier with more charging. You’d still have all the crashes and everything because people would be going for it. It’s so hard that sometimes in rock sections you have ten people stuck there.

Those rock sections are no joke. How are you guys not breaking your hands, wrists, and fingers constantly?
That’s the thing, wrists and hands. The stuff is so hard! And ankles, too. But it’s not as high speed either, so when you crash you’re not tumbling and cartwheeling through the air. But it hurts because you go from ten or fifteen miles an hour, to a dead stop. It doesn’t feel very good!

Yeah, those rocks are pretty jagged too!
Just tipping over in them you get your hip, your shoulder, your elbow, everything. Go stand on a rock pile and jump on your side. That’s pretty much how it feels. [Laughs]

I’ll just take your word on that. Are there any disciplines you’d like to get into in the future that you haven’t tried yet?
Not really, I’ve pretty much covered the field. The only thing I haven’t put much effort into are GNCC races because they’re so far away on the East Coast. Right now, I just want to focus on motocross and supercross and do some EnduroCross. I don’t really put much effort into the EnduroCross races, and I’ve gotten on the podium a couple times and have finished top ten in points just showing up. I have more fun riding the outdoors and supercross and just motoing in general. I grew up racing motocross, and I feel like I haven’t accomplished what I want to accomplish in motocross and supercross. My results haven’t been where they should be, but I’m racing myself back into shape after my injury last year and they’ll be coming around, and I think in the next few rounds I’ll be able to step my game up. I had worked up to sixteenth in the first moto at RedBud until halfway through the last lap. I went off the track and got passed by a few guys and finished nineteenth. I want to make something happen for myself, for my own personal goals.

Up until RedBud you were out in Oklahoma with Jimmy Albertson. How’d you guys hook up?
His van broke down on the way to Colorado, and we were only an hour out from where he was so I hit him up. We pulled in and hung out with them and helped them out. They’re privateering it in their sprinter van just like I am, and we just started traveling together. He invited us out to Oklahoma, and we’ve been riding at Canard’s house and training with Jimmy’s program, and it’s been super sweet. We’ve had a good time, the riding is really good, and it’s a good way to adapt to the heat and humidity. But we left for RedBud, and we’ll be back on the road until Washougal. Then I’ll put my bike on the Gus Bus and fly to the last three. For supercross I think we’ll be back though.

What’s up with the squirrel suit pictures on your Instagram? (Twitter: @k_rookstool Instagram: @rookstool)
[Laughs] I got that a couple years ago on Halloween. I went to the store and all the costumes were sold out except the squirrels. I was like, ‘What? Nobody wants to be a squirrel?’ It was a hit, and it’s never going away. It fits perfectly because I’m kind of a squirrel myself. It’s hard not to laugh at that thing.

What’d we miss?
I just want to say how much I appreciate everyone who is helping me do this. My buddy from Oregon, Mikey Horban, we decided we were going to do the Nationals at the last minute, and my buddy helped us by loaning a sprinter van, and we have this old guy Dan from Danco Performance who is helping us out too. He’s awesome and does my motors and everything. We’re just traveling around the country on our short bus couch surfing for the summer. My buddy Lonnie Alexander is helping us out a lot too. If he wasn’t helping us, we wouldn’t be able to do this. Also, I wouldn’t be able to do it without these guys: alexanderexhibit.com, Scott Russell from Motosport Hillsboro, Moose Racing, Danco Performance, Dunlop, Sidi, Bolt, No-Toil, ODI, See See Coffee, See See Motorcycles, Polarstuff.com, Scott, 180 Decals, Motoseat, Supersprox, Dubya, and Jim at Merge Racing Technologies. Also I’d like to thank Jimmy, Georgia, and Gregg Albertson for letting us stay at their place.