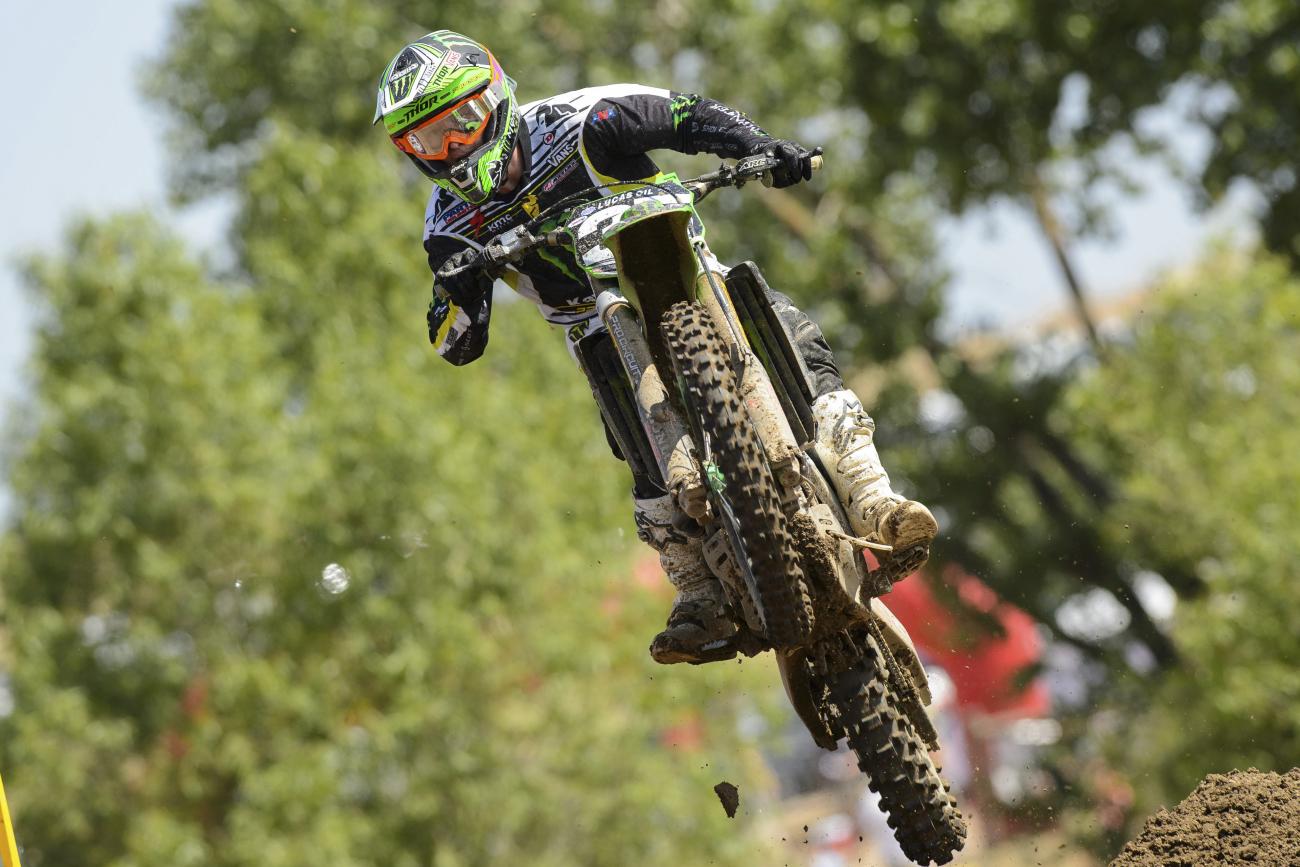 So far it’s been the Red Bull KTM show in the 450 Class as, except for Josh Grant’s first moto win at Glen Helen, Ken Roczen and Ryan Dungey have killed it. What about guys like Trey Canard, Justin Barcia and James Stewart? Sure, Canard’s been on the podium, but none of those three have been close to getting a win yet. It’s going to happen at some point, perhaps as early as Thunder Valley. – Aaron Hansel

Stop the perfect season talk right now, folks. Sure, Jeremy Martin has been awesome so far, and yes, he’s part of the Carmichael, aka Mr. Perfect, crew, but there are just too many variables to go 24-0. Be it a mechanical failure, first-turn pileup or even a drunken streaker running on the track to steal banners at the wrong time (is there ever a right time?), sooner or later something will happen and someone else will win. Let’s see if it’s this weekend at Thunder Valley. -Hansel

Justin Hill was fourth overall at Hangtown, which is great (a career-best actually), but he no doubt was bummed that he just missed landing on the podium. He was inches from passing Justin Bogle at the finish line in the first moto (.418 seconds), and after a crash in the second moto, was inches from passing Jessy Nelson (.355 seconds) at the line. The result was a tie for third with Christophe Pourcel, with CP getting the nod via his better result in moto two. Let’s see Hill’s on-track reaction to being agonizingly close to his first National podium last weekend. -Hansel

A blown motor, an early-moto crash and bad starts have all conspired to prevent us from seeing what Jason Anderson could do at the first two rounds. He’s got the speed and the conditioning to battle up front, but it hasn’t come together yet. Let’s hope things fall in line for him at Thunder Valley so we can get a better gauge of what the new-and-improved Rockstar Energy Racing rider is capable of this summer. -Hansel

When your only listed sponsor is your own last name, you know you’re a privateer. Scroll down the results list from the GoPro Hangtown Motocross Classic and you’ll see Fredrik Noren at twelfth overall. That’s a superb result, especially when you consider he beat guys you’ve heard of like Josh Grant, Phil Nicoletti, Ben LaMay, Ivan Tedesco and Jimmy Albertson. Let’s see if he can do it again at Thunder Valley. -Hansel

Has anyone had a breakout month as good as Jeremy Martin's in May? The Yamalube/Star Racing Yamaha rider won his first SX main event in Las Vegas, then took his first outdoor moto win at Glen Helen, later added another moto win and his first overall, then his first winning streaks by taking both motos at Hangtown (four in a row), SX/MX wins (three) and outdoor overalls (two). And just think, his teammate Cooper Webb has gone 2nd (Vegas West Region main), 2nd (Glen Helen) and 2nd (Hangtown) for five runner-up rides in a row! Will June see more of these blue streaks? – Davey Coombs

At more than 6,000 feet above elevation, Thunder Valley robs riders of breath and power. While most riders try to downplay conditions, we would be remiss if we didn’t mention that such elevation changes bike setup, energy and the like. Adjustments vary: some get in early to adapt to the thin air, some come in late to reduce exposure, and all will change engine settings. Who will adapt to the conditions of the Mile High (no pun intended) air of Colorado? – Chase Stallo

The Nationals bring their own set of challenges for privateers in the 250 Class, like finding enough power to compete with factory equipment, and driving race to race with little time to ride or train. This year, though, privateers are leaving a mark. Jackson Richardson, Dillan Epstein and Matt Lemoine finished 9-10-11, respectively, in the second moto at Hangtown, proving privateers can succeed in the 250 ranks. Can the three rise to the challenge again, or will the top ten be littered with factory bikes? – Stallo

In just his second season in the 450 Class, Malcolm Stewart has washed clean—to an extent, anyways—his reputation for flash one moto, and crash (or bike problems) the next. Last season Stewart finished with six points or less in eight motos. Furthermore, of his eights top tens a year ago, only two came after a top ten in moto one. He has already matched that total in 2014. Through four motos. Mookie and consistency have been a match, but will it continue at Thunder Valley? – Stallo

Well, it didn’t take Ken Roczen long to rebound from a gut wrenching loss at Glen Helen. Roczen answered the bell with a complete 1-1 performance at Hangtown. The ball is now in Ryan Dungey’s court. Hangtown has never been Dungey’s “favorite place,” as it is one of the only tracks he’s never won at during his 450 career. Thunder Valley? He’s won their three of the last four years and three straight times from 2010-2012. Can Dungey hold serve this weekend? - Stallo