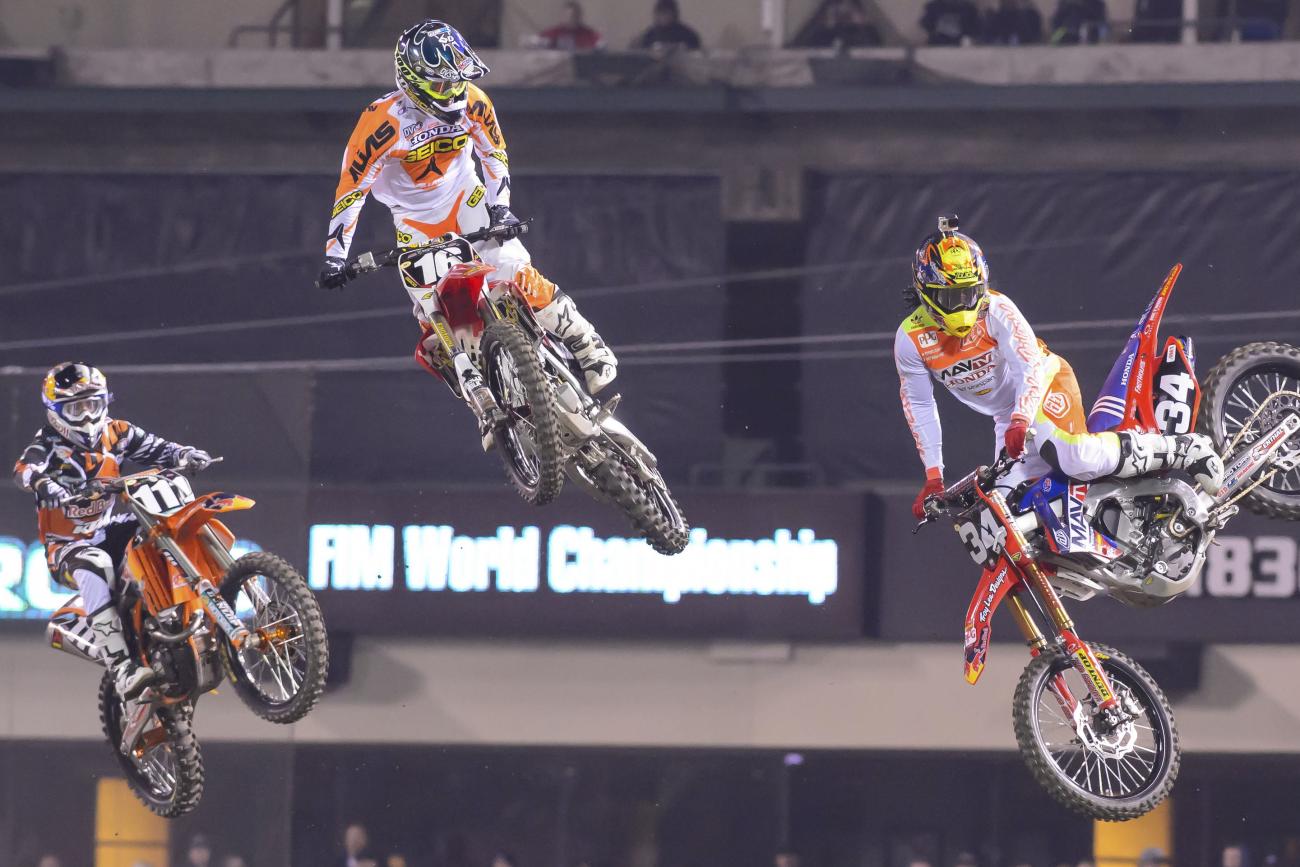 With Monster Energy Supercross heading back out West this weekend, it’s time to revisit the fantastic title battle between Jason Anderson and Cole Seely. With three rounds remaining, Anderson holds a four-point lead over Seely, and has three wins to Seely’s one, although Seely has led fifty-two laps to Anderson’s six. So far the two have been pretty evenly matched, but time will tell whether or not Seely’s time aboard the Team Honda Muscle Milk 450 will give him the edge in Houston. – Aaron Hansel

Unlike Seely and Anderson, Dean Wilson is pretty much out of the championship hunt. The Monster Energy/Pro Circuit Kawasaki rider only has three rounds to erase a thirty-three-point deficit, and that’s not happening. But that could work to Wilson's advantage. As we saw earlier this year when it looked like Wilson was out of it after a few bad races, he can be lethal when the pressure’s off. Let’s see if that factor, combined with his time aboard Chad Reed’s 450, will add up to a win for Wilson on Saturday night. - Hansel

For the most part Justin Barcia has been underwhelming this year. Sure, he's sixth in points with three podiums, which isn't bad, but we're talking about a guy that absolutely dominated two races last year. He hasn’t won a race yet this year. The good news is that two of those podiums came in the last two races, and Barcia seems to be on the upswing right now. Let's see if he can get his, and Honda's, first 450SX win of 2014 in Houston. -Hansel

To the winner’s circle that is. Since James Stewart’s header pipe collided with Mike Alessi’s bike in the first turn at Daytona, effectively ending his bid for a title, the Yoshimura Suzuki rider has been on an absolute roll, winning the last three races in a row. That’s something he hasn’t done since 2009! With a thirty-six-point deficit to Ryan Villopoto, Stewart’s title hopes are still a distant mirage at best, but that doesn’t mean he won’t be trying to clean up for the remainder of the season. Will do the quad in Houston? - Hansel

If you’d told Ken Roczen at the beginning of the season that after thirteen rounds he’d have six podiums (two of them wins) and would be fourth in the points, he probably would have been happy about it. That said, he’s probably not pumped on how things are going right now—the first half of the season was much better for the Red Bull KTM rider. We know Roczen can win and get podiums, but unfortunately the last five races have produced a pair of DNFs and just one podium. Let’s see if he can improve that ratio in Houston. - Hansel

Although he hasn’t made the same splash rookie counterpart Adam Cianciarulo did in the East Region before injury, Yamalube/Star Racing’s Cooper Webb has been putting together a strong season. Through six rounds Webb has three top fives, including two podiums. The West Region will leave the confines of California for only the second time this season, and the North Carolina native should feel more at home with the tacky dirt in Houston. Will it translate into another podium for the rookie? – Chase Stallo

At its root, adrenaline causes the heart to beat faster, in effect producing more energy. After suffering a broken foot during his heat race in St. Louis, Toyota/JRG Yamaha’s Justin Brayton, running on adrenaline, would take command after a restart (due to Wil Hahn’s crash) and cruise to the win. In the main, Brayton battled for a top four spot, before colliding with a downed Ryan Dungey on the last lap, breaking his pinky. The injuries didn’t slow down Brayton a week ago, but with a seven-day window between races, has the pain begun to settle in? We will find out in Houston, because he’s going racing. - Stallo

While pre-season title aspirations are long gone, GEICO Honda’s Zach Osborne is still hoping to end the season on a positive note. “To me, I'm riding with zero pressure,” said Osborne in a team statement. “I'm just gonna go out there and send it and see how we do. There's no reason to hold anything back." Following back-to-back fourth place finishes to begin the season, Osborne’s season took a turn for the worse two rounds later at A3 where he sustained two small fractures in his clavicle. "I couldn't do much for the first four weeks, but I've been riding every day since the early part of March,” he said. Can Osborne find the podium for the first time in 2014 in Houston? – Stallo

Lucas Oil/Troy Lee Designs Honda’s Malcolm Stewart is in the midst of a career year. After bouncing around during his first three seasons, Malcolm has found his niche with TLD. He captured the first two podiums of his career in 2014 (Anaheim 2, San Diego) and is currently sixth in points. Can the younger Stew find the podium for a third time this season? – Stallo

Before transferring to the 250SX East Region, Vince Friese moonlighted in 450SX during the first six rounds—making all six mains with a best finish of fourteenth. Friese is currently fifth in 250SX standings and still has a slim chance to reach the top twenty in 450SX points and cash in on the big bonus. How will Friese fare in his return? - Stallo