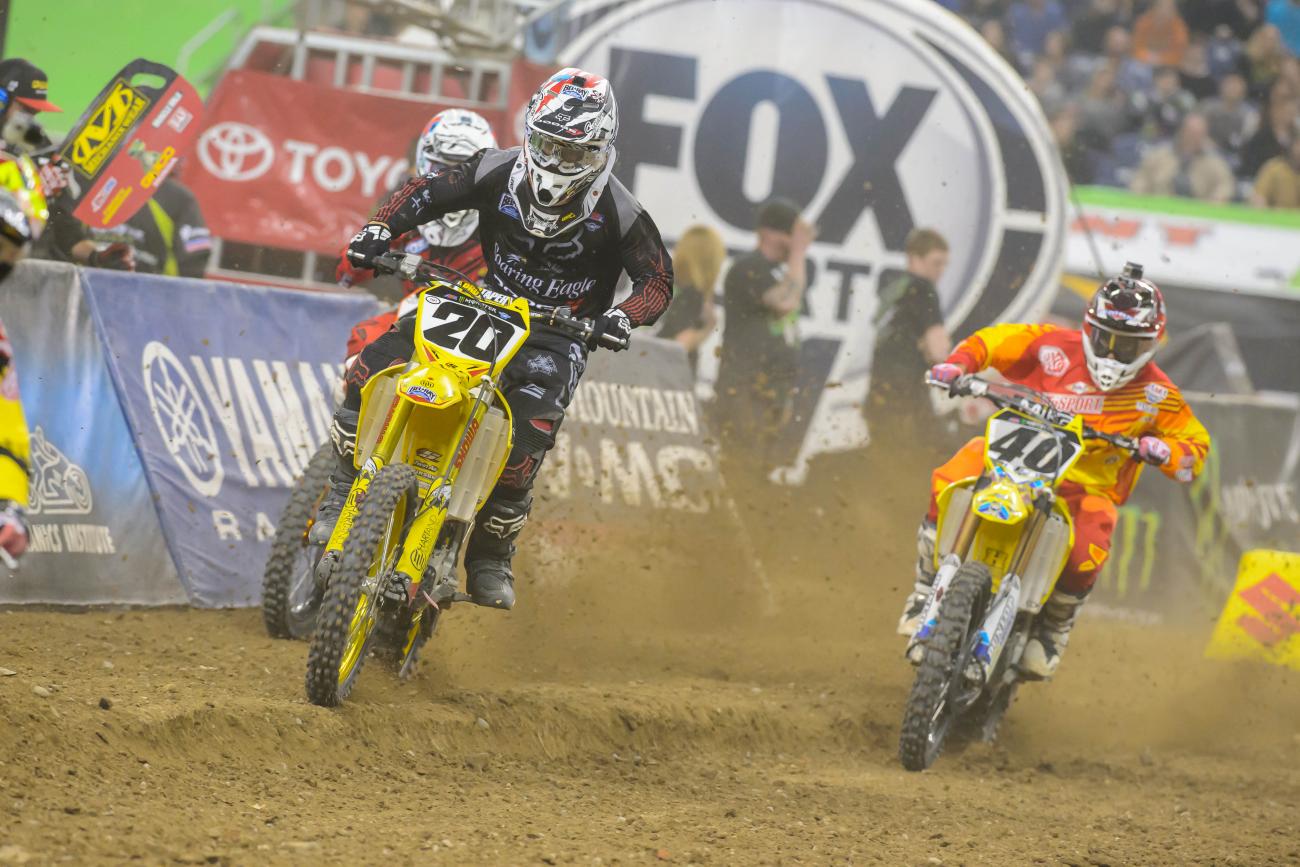 Each week we select three key questions and have our panel of “dudes who go to the races” answer ‘em. Read their thoughts and share yours below.

1. Let’s revisit the Seely vs. Wilson debate from two weeks ago. Who has shown the most potential?

Jason Thomas: This has gone back and forth for me. At Indy, I was shocked to see Seely on the podium but Deano was in a first turn crash and didn’t really get to show what he had. At Daytona, Dean was definitely the talk of the two. He was the fastest qualifier, won his heat race over James Stewart and held second place for 15 laps. The last five laps were incredibly bad but he had shown huge potential. Seely had an off week, which I expected for Daytona. This past weekend was the last matchup and I think Seely had to be given the upper hand but it’s closer than most would think. Dean qualified third overall and was actually the fastest in the final timed session. In the main event, Seely grabbed the holeshot but Dean had actually caught him before he threw out the anchor at lap 10. Seely was then separated from his bike by Andrew Short, so in the end, neither of them had much to show for their result. I’m going to give the edge to Seely based on that podium finish but both of them have very strong cases as to why they should be the winner.

Steve Matthes: Why do you have to do this, Weege? No matter what anyone says, someone is going to be upset. But I get paid to put the hard words down on (virtual) paper so I have to go with Wilson on this one. As I’m sure you’re aware, the American season is 17 rounds of supercross and 12 rounds of motocross. And although these two riders are close in speed indoors, I have to give Wilson the big edge in motocross and therefore, the most potential to be a big-time 450 guy. I know these last two weeks have been rough on members of the Dean Wilson Fan Club (which Weege and JT are member #’s 003 and 004 of) but to me, winning a national championship is huge. That’s a gnarly title to win and Wilson’s done it, Seely hasn’t even gotten that many top fives outdoors.

But indoors the guys are close, Seely’s holeshot, led laps, made the podium and done pretty well in supercross while Wilson has three career 450 SX’s to his name and has shown speed. Mitch Payton told me this weekend that despite Dean’s fades in recent weeks he “can work with speed”. So who am I to question him?

Jason Weigandt: Steve’s right (I hate saying that) but we will indeed get roasted no matter who we pick here. Anyway… it might not be fair that the sport works this way, but most teams will take all-out speed over consistency (and for good reason, because fans talk about the fast guys more than the “solid” guys—see the list of riders below for reference). Seely has been really, really good but Wilson has shown even more upside. Logging faster laps than Villopoto and Stewart at times is just ridiculous. That’s why I’m in the Wilson Fan Club right now—you just can’t buy that kind of speed. Okay, well, you actually can buy that kind of speed and that’s what teams pull out the checkbook for.

Okay, Dean’s been terrible in the final laps of the last two races but he has to have the ability to go the distance deep inside of him, he won a darned 250 National MX title. I can’t imagine he’ll be plagued by arm pump in every race for the rest of his life.

I think Seely was better as a whole in these three races, but potential is based on what ifs and future forecasting. So, just imagine if Wilson didn’t get arm pump in these races….

2. Highs and lows each week from the Short/Tickle/Brayton/Hahn/Peick/Hill gang. Each takes a turn having a good night and a bad one. What do you think changes their fortunes so much?

Jason Thomas: I think that all of these riders are very close in overall speed and skill. The fluctuations we see are due to crashes, bad/good starts, and which rider feels comfortable on that particular weekend’s dirt makeup. Brayton is the weird one here for me as earlier in the season he was clearly better than this pack but he has since become a mainstay of the group.

Steve Matthes: Starts, starts and more starts. That’s what supercross is all about. Short’s been in the top ten each week and to me has been very underrated this year. Tickle had a so-so start to the season, but has caught fire recently. Brayton was great early, but we haven’t seen much flash from him lately. Hahn has been better than I thought. Peick has been great and Hill should be commended for just coming back from some serious injuries. So you’re sitting there saying “Thanks Matthes, I knew all of that already” but there’s nothing really separating these guys other than starts. Right now Short is nailing them with more consistency than any of the other guys.

I do think that Peick is one guy, out of all those you just listed, that is doing the most with the least. It’s Weston, his mechanic and Louie Peick trying to set that RM-Z up every weekend while the other guys have an armada compared to Weston.

Jason Weigandt: I think the sport has grown so sophisticated now with high end video software, EFI mapping, telemetry, trainers and coaches in all directions, rutless tracks and such, that most of the guess work is removed. This, in general, moves the pack closer together, and the difference is much more subtle. I hate to say this, but I really think it’s just confidence. One dude has one good thing happen during the race or during the week or during practice and it all snaps together. Heck Shorty told me yesterday the difference between his 10th (at the back of this group) and his 4th (at the front of it) was all mental. I also talked to Brayton this week (of course) and he said it’s something he can feel, but something you can’t see.

We’ve heard for years that these guys could all beat each other if they just believed in themselves, and that’s the case here. Each has gone through highs and lows, confidence-wise, this year, and it has a major impact on the actual results. Well, except Peick. He doesn’t believe in confidence and momentum and will run through anyone at any time if he stays on the bike.

3. First real big swing in points in 250SX East Region, with Davalos finishing sixth. Can he or Baggett still win this?

Jason Thomas: I don’t think this is over quite yet. Sure, AC46 has proven that he deserves to be the point leader and is the favorite to take this to Vegas. The wild card is the inexperience factor and if he has one mistake, everything changes. The 250SX series, both east and west, are notorious for wild swings and I could certainly see this one going the same direction. For Adam, if he can just stay the course, he won’t have to venture down that road but you can bet your bottom dollar that Davalos and Baggett haven’t conceded anything just yet.

Steve Matthes: Well I picked Baggett in this thing but I’m afraid I don’t think it’s going to happen. And it’s not going to happen for Martin either. I guarantee you that Davalo’s crash this weekend takes some wind out of his sails going forward from here. And Blake, well I don’t know how he’s going to either A) petition the AMA to put all the races at the Daytona speedway or B) pull some starts. Nope, I think this title is well into the hands of The ‘Rulo Dog.

Jason Weigandt: The ‘Rulo Dog? Really? I think all that remains are the standard realities of racing—any rider can throw it away at any time. If AC were to blow this, it won’t be because he’s a rookie, can’t handle pressure or doesn’t have the experience. He’s proven that none of those things are a problem in these first five races. Anything can happen to any rider at any time, so he’s not immune, but I think he’s got as a good a shot to bring this home as even the most experienced, veteran rider would at this stage.