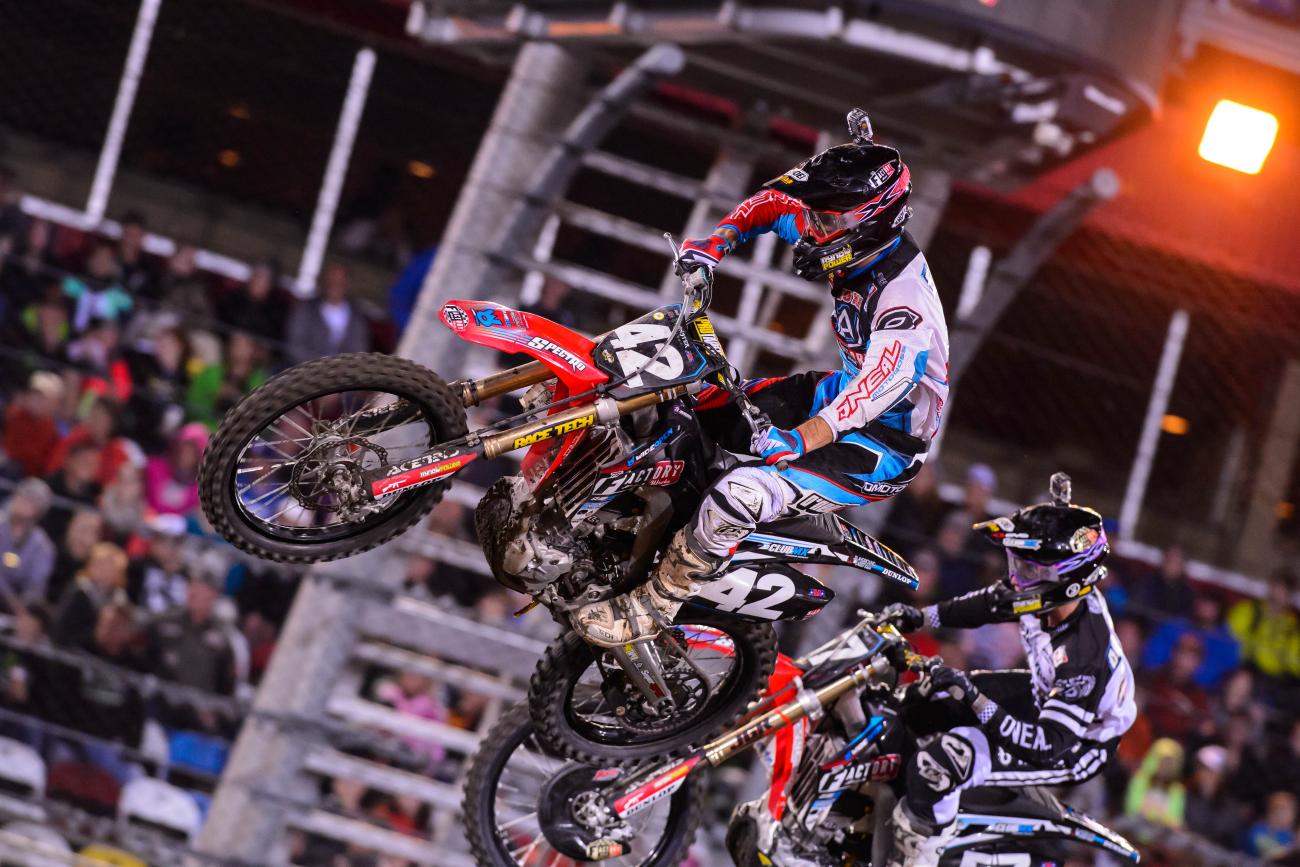 3 on 3 Big Questions for Detroit

We’ve come up with three big questions for our panel after Daytona—read up on what they think and be sure to drop your thoughts in the comments section below.

1. Blake Baggett has gone 1-2-1 in his last three Daytona races. He praised some bike changes and work on starts for the win, and says those changes work even better on the test track than at Daytona. Is there more to come on regular supercross tracks or was this just one-night-only domination?

Jason Thomas: For Blake, the starts are certainly one of the keys to his failure or success. If he really can consistently improve his starts, then yes, he can run up front and potentially win more races. I really don’t see him dominating like he did at Daytona, but he can definitely still win races. The first 30 seconds of the race is the most important part for Baggett.

Steve Matthes: I refuse to believe that Blake Baggett's starts and riding were so much better at Daytona because of some bike changes he made. The more likely scenario is that Blake just feels at home and comfortable at the Speedway. He's a good supercross racer, one would think he’s on par with his two teammates, but we haven't seen that yet this year. But it's still a tad early. He knew that Daytona was rough, rutty and ridiculous (had to come up with another "R" word) and he knew he could do well. This led to confidence, a good start and the run away.

In other words, like a lot of riders, Baggett's a head case. Shocking, I know. I'm just bitter that I picked him for the 250SX East Region title and he hasn’t pulled through like I expected (yet). Maybe "we" grab some momentum from Daytona and start picking it up from here.

Chase Stallo: Baggett proved in Dallas that with a good start he can contend on any track—and even then he had just gotten back on the bike after an injury. The major problem for him has been starts, though. He started well in Daytona and dominated, although he probably could have gotten away with a bad start and still won. He feasts on Daytona. The key for the rest of the races will be starts. If he has them figured out, AC will have more company at the top of the standings. If not, it may be a two-man fight between Davalos and AC for the title. Detroit will tell a lot about which way this title fight will swing for Baggett.

2. Same for Dean Wilson. He's got a 250 motocross title and goes fast in the rough stuff. Was his speed a Daytona thing or can Dean do this again in Detroit?

Jason Thomas: I think Dean may be a bit different than Baggett in that we have seen him show great speed in standard 250 supercross racing as well, not just Daytona. Once he got over his early-season woes, he was at the top in nearly every practice and should have won Oakland, did win Anaheim 3 and quite possibly should have won San Diego as well. I understand no one likes the coulda woulda shoulda stance but speed wise, he was easily capable of winning the past three races on the small bores. So he can definitely go fast on a typical supercross track!

Steve Matthes: Some of the great mysteries of life include: How did they build the great pyramids of Egypt? Where's Bigfoot? Do aliens exist? And how come Dean Wilson hasn't won a 250SX title? He's got everything he needs to be successful but something always seems to go wrong. Still, when it comes to Dean, it’s like the Monkees once sang: I'm a believer.

I once thought the decision to let Dean ride Reed's bike could backfire on Mitch Payton, but now I'm starting to think that it could backfire on Reed. You see, Chad would love to hire Dean for 2015, but if Dean-O keeps getting great results, he's going to price himself out of a Reed's range. So in effect, Chad's decision to put Dean on his bike to look at him for 2015 is going to cost him a shot at actually getting Dean in 2015 if the #15 repeats what he did for 15 laps at Daytona. I think Dean can do some damage in Detroit and other "real" supercrosses. We've all seen that he has speed and talent.

Chase Stallo: There are a few things that need to be taken into account here. Firstly, Dean built his entire off-season training program around riding at a high intensity for 15 laps. While you may scoff, and say, “Well, he should be able to do 20, it’s only five more laps,” any trainer will tell you it’s more complicated than that. Daytona was more than 50 percent longer than the 250SX race Dean (nearly) won in Oakland, for example. The race time in Oakland was 14:11.241, while Daytona came in at a staggering 22:22.387. Add in the rough track, a new, heavier bike and pressure from Ken Roczen and Ryan Dungey and you can understand why Wilson was flat at the end. To answer the question: yes, Wilson will continue to contend for top five’s in 450SX.

3. Who is your biggest surprise in 250 East, positive or negative?

Jason Thomas: My biggest surprise would be Jeremy Martin’s struggles. I almost picked him as my title favorite but went with Davalos in a last minute toss up. He looked to have the goods after a very strong outdoor season, and Yamaha placed an updated machine underneath him. But he just hasn’t been anywhere near what was expected. Even at Daytona, where he theoretically should have been at his best (podium in 2013), he was simply off the pace of the leaders. I don’t have an answer for his struggles, but they are glaring.

Steve Matthes: Without a doubt it's Yamalube/Star Racing Yamaha's Jeremy Martin. With finishes of DNQ-DNQ-19-6 in the first four races, Martin is out of the running for anything other than maybe a top ten in the series. Many picked him to win the title this year! I don't know what has happened to J Mart (I have some theories, but I'm still working on them). I think his bike is good, he seems to work hard, he's got speed, but it's just not working out right now. I can't even imagine the pressure that team owner Bobby Regan is putting on him these days. Bobby's not known as a guy that coddles his riders so I can't help but think there might be a negative atmosphere around the truck these days. And that's probably not helping.

Chase Stallo: It’s hard to argue against Vince Friese being the biggest surprise this season. The knock on Friese last year was he feasted on a weak East Region and couldn’t do the same against a stronger field this year. Well, he has. He won’t blow you away with lap times or style, he just grinds and grinds and wears you down by the end of the race. He hasn’t finished outside the top ten yet this season, he sits fifth in points and continues to prove last year was no fluke. Raise your hand if you saw Friese ahead of Blake Wharton in points through four rounds? Anyone? Bueller?