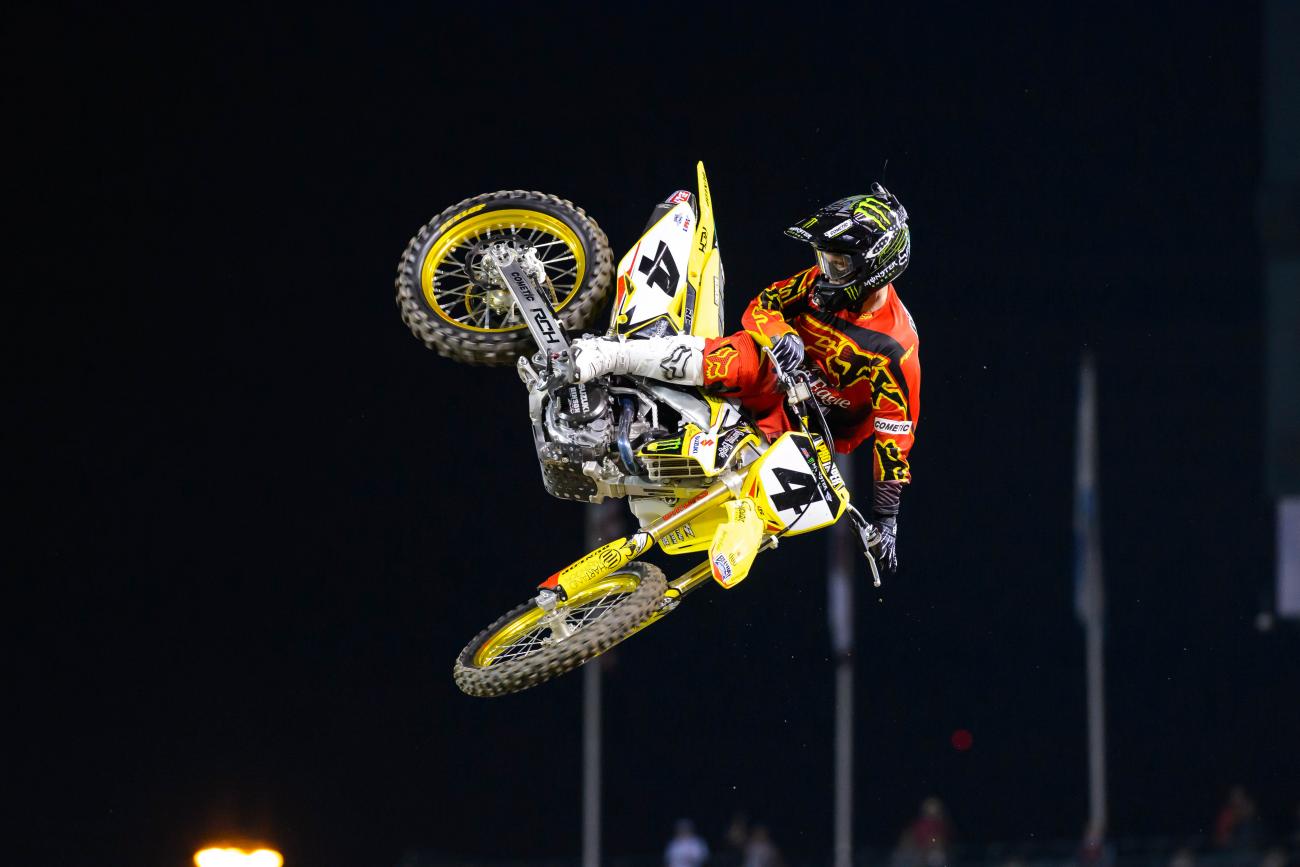 After putting the finishing touches on his 2.5-mile superspeedway, in 1959 William France Sr. (a.k.a. “Big Bill”) opened the Daytona International Speedway for business. Easily one of the most recognized racing circuits in the entire world, Daytona has hosted epic NASCAR races, Sports Car events and AMA and FIM Superbike races. Even world class karting races are held upon its 31-degree high banks. Motocross also has its place in this pantheon of motor racing greatness in the form of the annual Daytona Supercross. Since May 13, 1971 the very best have raced and won here and perhaps the greatest of them all is Ricky Carmichael. Not only did he win here five times (a record), but he wheeled a 3,200-pound stock car around the sprawling place as well. Now that his epic career has been packed up and put away in a safe place, Carmichael in his quest to give back to the sport now promotes and hosts the Monster Energy Ricky Carmichael Amateur Supercross. A labor of love for the champ, this Sunday will mark the fifth anniversary of the very unique and very popular race. After a hard day of shoveling sand and moving dirt and art directing jumps and turns and whoops with famed track builder - and 1981 supercross champion – Mark Barnett, on Friday evening RC took a breather and let us in on just what this whole gathering of the MX tribes means to him, his sponsors and the sport itself.

Ricky, I want to hit you with this question straight off: You won 15 AMA Championships and 150 races during your racing career. The pure and simple numbers you put up on the scoreboard are just mind blowing. Do you use the same sort of motivation that you did in racing that you do in your post-racing career with these business enterprises you have going? A perfect example being the Daytona Supercross and all that comes with it.
Well, absolutely. I do and try to use the same approach. The thing that is a little bit different, unfortunately, is that when I was racing, for the most part, I could predict the outcome. It was up to me. Now, in business, there are so many other things that have to happen. It’s not winning a race where you’re in charge of everything. You’re in charge of you own decision making on the track and all that good stuff. It’s a little bit different in business, for sure. Nevertheless, it’s fun and I’ve been learning so much.

So has the city of Daytona Beach given you the keys to city?
I don’t think I’m going to get the keys to Daytona, but there is definitely a lot of stuff going on. A lot of good stuff and fun stuff going on here. It’s just busy. I’d like to think I could get the key to Daytona International Speedway. That would be cool.

You won the Daytona Supercross five times and I know you’ve never been shy about how much those wins meant to you.
There is so much racing history here, whether you’re on four wheels or two wheels, and this place is just special. When we used to race in the daytime, it was just so cool. It was a little more special when it ran in the daytime. It was just so cool. Racing in the daytime is what made it Daytona. And for the big bosses at the manufacturers Daytona was just a great place to win. There was always a lot of pride here.

I loved when you guys raced during the day. Supercross is awesome at night with all the showbiz razzmatazz, but running in the afternoon on that brutal track is what made Daytona so badass and so unique – the anomaly on the schedule, you know?
Yeah, it used to be so cool. It started early and it ended early. It just had a different feel. And when you were done, you could shoot over to Memorial Stadium and watch flat track racing. It was a good program. I still really enjoy coming here, but I just loved that program and the ritual everybody had. I think going to the night race is better for the fans and TV, you know? We’re racing at prime time and I have to commend them for making the change.

Getting into the Monster Energy Ricky Carmichael Amateur Supercross, what does having your own race – and a race with your name on it – mean to you?
Well, first of all, I think it’s an honor to have the Ricky Carmichael Amateur Supercross race at Daytona. Like we talked about earlier, there’s so much history here that I think it’s important from the history standpoint that these amateurs get a chance to race here. I wish I would have had the opportunity to do so, but never did. To be able to give the amateurs this chance is cool. We work hard at it and it’s cool to see the growth form the first year to this year. None of this would be possible without the great sponsors we have involved. I can't thank them enough for their support. We work hard so the amateurs have a good experience. And we want the track to be as close as we can make it to Saturday night, but at the same time we want to make it safe for the amateurs as well. There are some safety precautions that go into it, but that’s a good thing. That needs to happen.

RC, your race is now one of the elite amateur races in the nation now, correct?
Yes, that’s right. We are now one of the elite amateur races this year. I think that speaks volumes to what we’ve been able to produce and it’s a testament to our hard work and to doing things the best we can. I’m very thankful to be a part of one of the majors now. I think these amateurs need to be exposed to supercross whether it’s full-blown or whatever it might be.

How many entries will you have come the kickoff of the race on Sunday?
We’re a sellout at 1400 and I think we’re only 100 away from hitting that number. It’s pretty much a sellout. We haven’t even had any walkups yet.

This being your race, what do you do when the racing starts up?
I participate in a lot of things. First off, I get everybody going at the riders meeting and from then on I just float around. I try to spend time with everybody and take mental notes. On Monday when the guys are getting their trophies, you know the race winners and the award winners, I go acknowledge them as well. I try to float around and be as visible as possible. It’s a lot of fun for me.

Who are the three competitors who have lined up at Daytona who really personify this place? You know, the Daytona tough guys.
Stanton. There’s more than three. Gosh… Stanton, Villopoto and Dungey. I know I’m missing some, but those are the dudes that I see that just kind of grit it out, if you will. There are tons of other guys that are so much smoother and race this race with more finesse. We’re talking about James (two-time Daytona winner) and Chad (three-time winner). They raced the race and were just smoother at doing it. It’s just a different approach and there’s nothing wrong with it because it got the job done.

We’re nine races into the 17-race 2014 supercross series. What’s your broad stroke take on just what has played out thus far?
Yep, the Monster Energy Supercross Series has been good this year. It’s been competitive and has had a lot of moving parts. There have been some point swings with the second, third and fourth place guys. Obviously it was disappointing to see Chad Reed get hurt. He was starting to catch fire like he was a couple years ago. I was really bummed to see that. I love seeing that guy do good. And then there’s Ryan Villopoto. He hasn’t been as dominant on the track as far as raw speed and winning, but looking on paper he has a nice points’ gap and at the end of the day that’s what it’s about. He’s getting the job done. That’s been my perspective up until now. I don’t know who can go on and challenge him for the title at this point. I guess there are a handful of guys. It’s Dungey, Roczen and Stewart at this point. Those are the three guys that have a chance to make something happen in this last half of the season.