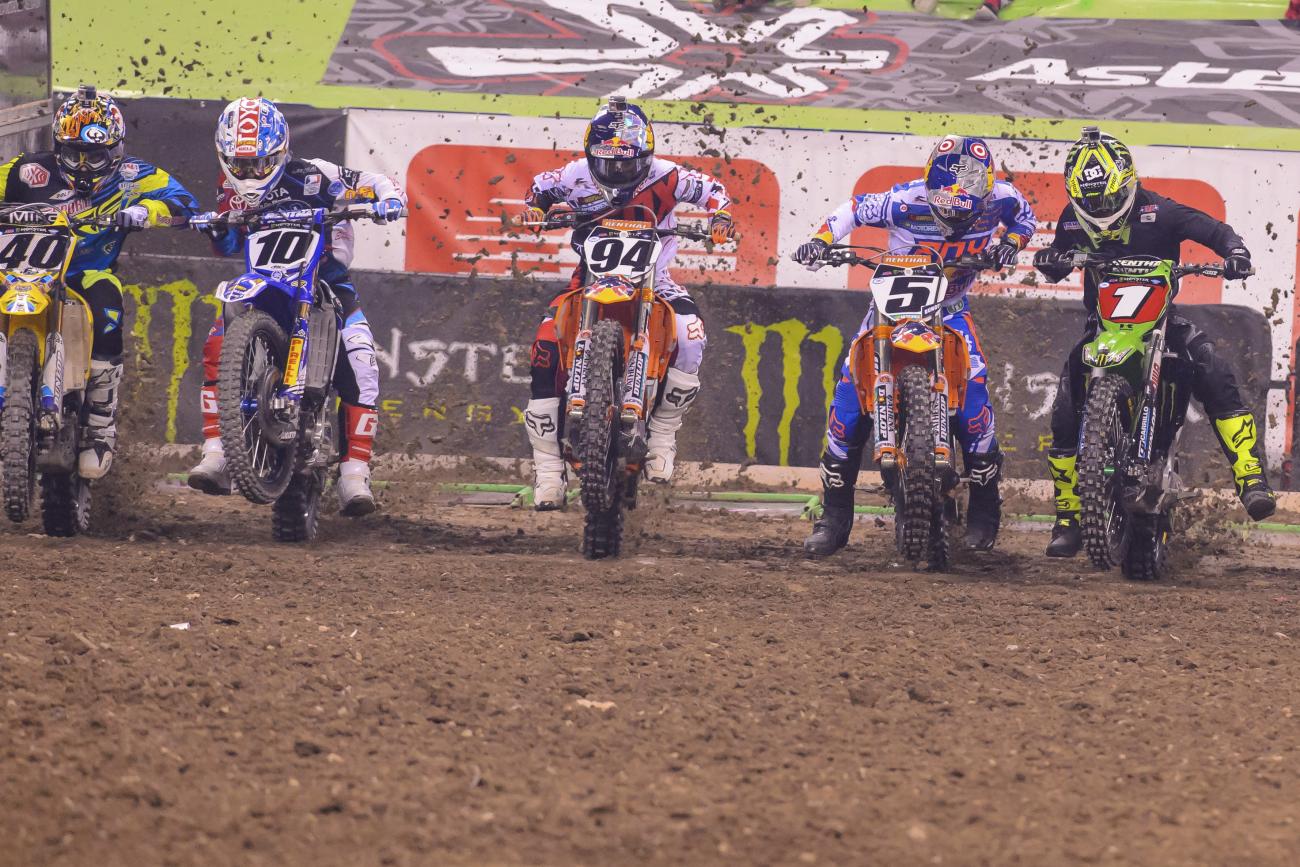 Hello, everyone, and welcome to the Rev Up. Round ten (can you believe that?) of the 2014 Monster Energy Supercross Champion arrives at historic Daytona International Speedway this Saturday night. As one of the most prestigious motocross races in the world, the Daytona Supercross by Honda still exists as a special and unique challenge for all competitors. Gone are the days of racing across the speedway, 30-rider fields, minute-thirty lap times and daytime main events. But when the racers pass through that tunnel to enter the venue they all feel the aura that only the World Center of Racing can deliver. Yes, things have changed and will continue to change to keep pace with the times, but when they turn up the pristine grass infield in the tri-oval, the same sandy, black Florida soil is waiting, just as it has been since 1971.

One of my favorite things about the Daytona SX is seeing the track all set up before practice. The tan hued jumps and the dark ominous whoop sections are manicured to geometrical perfection. I specify this time as a favorite because of the transformation the course goes through from the opening practice sessions until the final flag flies. Most years, you can hardly tell it’s the same track. The scattered array of foot-peg-grabbing ruts, potholes and kickers that form throughout the day force a special focus from the racers and even the winners will have their share of sloppy moments. This is still the most grueling supercross of the year, and we have one of the most competitive fields in history set to attack.

As predicted, the previous week of racing in Indy was a pivotal event for the 450 class. Monster Energy Kawasaki’s Ryan Villopoto arrives at Daytona with a 23-point lead. The three-time defending champion has won the last three out of four races at this venue, and is in the proverbial cat bird’s seat. Meanwhile, a rookie is racing away with the 250SX East Region. As Adam Cianciarulo’s home event, Daytona could be a decisive factor in the Monster Energy/Pro Circuit Kawasaki pilot’s title quest.

Let’s take a closer look at both divisions, and get Revved Up for the annual supercross brawl by the beach!

Two mistakes have been the difference between Martin Davalos being undefeated in 2014, and instead being five points down to his teammate. After handing over the win for the second time in three weeks, the class veteran knows what he needs to do to win this title. That said, Daytona can be quite the pickle for a rider who is prone to crashing.

As for Cianciarulo, he has raced with an impressively cool head to begin his supercross career, but again, Daytona is a different beast to the uninitiated. Being a Floridian and spending his recent riding time on the loose, rutted and rough practice tracks of the Villopoto compound are two feathers in his cap. It won’t surprise me if he wins the race, or suffers some mistakes and has a bad round. Bottom line though, the kid has been nails so far.

GEICO Honda’s Justin Bogle has strung together two strong third place finishes, and as a rider who performed great in the ruts at Indy, I believe that will carry over well into Daytona. Plus, he is on a Honda and this is the biggest event of the year for the red riders. The Oklahoman is a guy to keep your eye on this Saturday night.

Behind the top three in points sits Monster Energy/Pro Circuit’s Blake Baggett who has suffered from horrendous starts his last two times out. As an “outdoor guy,” one would think he is a prime contender this weekend, and he is. Although, the track isn’t what it once was and some of that moniker has lost its luster to those who apply. But, it will be very rough and I believe fitness will be huge, and “El Chupacabra” doesn’t get tired, he gets faster. Blake’s another guy who can win this thing.

With his head-shaking performances so far in 2014 it’s hard to remember that Yamalube/Star Racing Yamaha’s Jeremy Martin earned his first career podium at this event a year ago. He did finish third last year and he does have the potential to repeat such an effort. Time to put it to work.

Red Bull KTM’s Ken Roczen was awesome for eight weeks during his rookie season in the big boy class. He won twice and was sniffing the point lead coming into Indy when the wave finally broke with two crashes forcing a DNF. In a twist of fate, teammate Ryan Dungey wins the race and leaps ahead of him in series points. Remember when I wrote, “Winning cures everything” a couple weeks ago? Dungey’s win placed him in familiar territory where in the event Villopoto has a mechanical failure, or a DNF he can pounce to win his second supercross title. Familiar because in 2010 RV crashed and got dirt packed into his silencer in Atlanta and finished 19th, then he crashed and broke his leg St. Louis five weeks later. Who won both of those races and the 2010 title? Ryan Dungey.

All the same, I think Villopoto is in complete control. He has been compared to Ricky Carmichael throughout his career, and I see him being in a similar spot to where RC was in 2003. That year Ricky held a big points lead after Daytona and didn’t win another race for the rest of the series—but he still won his third straight SX championship. He won two more titles (‘05 &’06) and then retired. I think RV’s plan is to win the 2014 and ‘15 titles, and retire as well. He’ll have this year’s title unless someone else can be as fast and consistent for 17 weeks.

This noted, when you look at the standings, it’s a hornet’s nest from second to fifth. Yoshimura Suzuki’s James Stewart is only seven points behind Dungey and is the only guy to win back-to-back races in 2014. He’s had two awful weeks in a row, and Daytona has been feast or famine for #7. He could win and move into second in the points or crash and fall to fifth. All things considered, he’s my pick to become the first three-time winner of the series this Saturday night.

As the title sponsor, Honda would love to see one of its own win this race for the first time since Kevin Windham’s wild romp in the rain (2008). It was a breakout race for them last weekend with two red riders on the podium. Fill-in ace Cole Seely rode brilliantly on the factory Muscle Milk ride for third and Eli Tomac finally put his GEICO Honda on the steps for second place. Pre-season title favorite Justin Barcia will return to action after a two-week hiatus and be gunning for his first win of the season. Now, that would be huge. A special addition to the field will be Malcolm Stewart. Reportedly, the Lucas Oil/Mav TV/Troy Lee Designs team sent the younger Stewart brother some race parts to dress up one of his Florida bikes and now yet another Honda machine should have a presence in the top 10. Look for Mookie to be banging bars near the head of the pack in front of his hometown. He isn't scared.

We can’t forget about JGR Toyota Yamaha’s Justin Brayton who is also in the title picture if RV has a mulligan, and I’m going to give some well-deserved ink to SmarTop/MotoConcepts’ holeshot master, Mike Alessi. At the season opener he holeshot his heat race and had a gap in three laps. In Indy he holeshot the heat and opened up a similar lead before winning again. In addition, Alessi has holeshot and led the first five laps of the last two main events. It will be interesting to see if his role at the front of the pack continues in Daytona, and if he is able to maintain the pace for 20 laps. He’s riding very well.

This is the longest running supercross race in the world, and the Ricky Carmichael designed course will be another torture test. Yes, it will be shorter, but rest assured it will be extremely rough, have off-rhythm sections and serve as the most difficult main event of the season. Villopoto can earn a full race lead in series points with a win, so the rest of the top five has to stop him now. Can Cianciarulo win in front of his hometown crowd in the 250 class, or will Davalos keep it on two wheels? It has been 10 weeks on the go for the 450 bunch, and including this Daytona race, there are six more until they get a rest. Carmichael always said, “The season really begins at Daytona.” Two more days to find out.