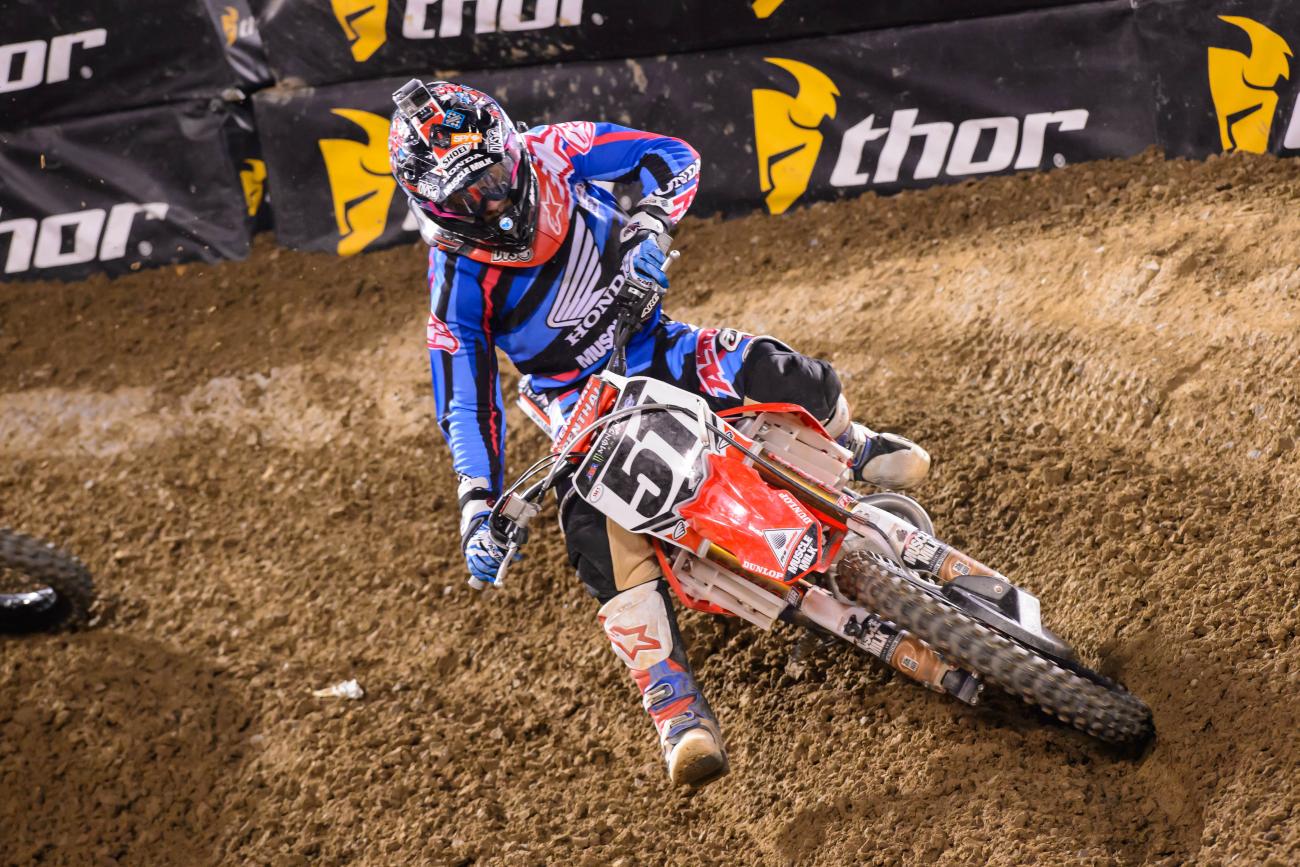 Justin Barcia – Knee
Comment: Barcia missed Atlanta and Indianapolis with a knee injury suffered in practice in Atlanta. He will be returning this weekend in Daytona.

Trey Canard – Broken Arm
Comment: Team Honda Muscle Milk’s Trey Canard suffered a broken arm over Thanksgiving weekend while testing and had surgery to put a plate in the arm. The original hope was that Canard would return at Dallas, but that didn’t pan out. The team says they’re now aiming for Detroit. In the meantime, Cole Seely, of the Lucas Oil/Troy Lee Designs Honda 250SX team, will fill in.

Davi Millsaps – Torn ACL
Comment: Millsaps tore his ACL this off-season at Milestone and had surgery in mid-December. He hopes to be back by Houston.

Weston Peick - Ankle
Comment: Peick turned his ankle into a cankle in Atlanta and crashed again in Indianapolis. Peick will tough it out in Daytona.

Chad Reed – Scapula, Collarbone and T1 Vertebra
Comment: Reed went down hard on the final lap in San Diego. He will miss the rest of Monster Energy Supercross and look to prepare for the 2014 Lucas Oil Pro Motocross Championship. In the meantime Dean Wilson will fill in for him.

Killian Rusk – Injured at Indy
Comment: Racer X received the following note from Rusk’s father following Indy: “During the semi race at Indy Killy took center rut going up the triple and a hit a hole. This flew him front-end low and caused him to come up short. He tried pulling the front end up and revving but did not have lift to get him all the way over. He came down hard on his front and his body hit his tank and bars really hard. He received help from the Asterisk crew. After assessing his injuries the doctors decided to send him to the ER. He had emergency surgery late Saturday night / early Sunday morning. Killy is now back in Murietta, CA, after a long flight Tuesday and seems to be feeling better. The doctors say he should be fine in few weeks. Special thanks to Dr. Bodnar and all the Asterisk guys.”

Ivan Tedesco - Burn on Leg
Comment: Ivan Tedesco suffered a small burn on his leg when his legs got wrapped up in another rider's rear wheel in the LCQ at Indy. He will be racing in Daytona.

Jake Weimer – Shoulder and Hand
Comment: Weimer broke a bone in his wrist and dislocated his shoulder in qualifying in San Diego. He had the following to say about his injury on Instagram: “Ok so here is what I have going on. I dislocated my shoulder and broke a bone in my hand. My hand should be good in 4 weeks. My shoulder does not require surgery. I can’t move it for 2-3 weeks then I start rehab which could be about 6+ weeks. My hope is things progress quicker than that and can get back to racing but I will not come back until my shoulder is healed, strong and I am ready. I will do everything I can to get back on the track healthy and strong.

Gannon Audette – Injured Finger
Comment: Audette tore some ligaments in his finger in Indianapolis. He isn’t 100 percent, but will be racing in Daytona.

Zach Bell – Broken Collarbone
Comment: Bell was claimed by a tricky triple-triple-triple section featured in Phoenix. The bone, which required surgery, was broken in three places and will sideline the Western Regional 250SX rider until Lucas Oil Pro Motocross.

Darryn Durham – Concussion
Comment: Durham had a big crash in practice at A2 and was knocked out. He missed a few races, but will race again when the Western Regional 250SX Championship resumes in Houston.

Casey Hinson – Crushed and Dislocated Right Wrist, Fractured Left Hand and Fractured Face
Comment: Privateer Casey Hinson is hoping to return late in the series after a December practice crash where he reportedly clipped a landing in a rhythm section and went headfirst into the ensuing jump.

Brady Kiesel - Broken Jaw
Comment: Kiesel broke his jaw completely through in two places and had to have it wired shut, along with chipping five teeth in practice in Dallas. Kiesel qualified for the night show but was unable to compete. He has already had surgery. He hopes to race at Daytona.

Vann Martin – Broken Wrist
Comment: Martin’s plans to contest the Eastern Regional 250SX championship have been thwarted by a broken wrist. Martin underwent surgery last week and hopes to be back on the bike as soon as possible.

Cole Martinez – Broken Wrist
Comment: Martinez broke his wrist at A3. He had surgery and hopes to be back racing by Houston.

Marvin Musquin – Torn ACL
Comment: Red Bull KTM’s Marvin Musquin suffered a torn ACL in early December and has already undergone surgery in his home country of France. We talked to the team in Dallas and they said that Musquin has returned to training in the U.S. but is not back on his motorcycle yet. Musquin is expected to return for the 2014 Lucas Oil Pro Motocross Championship.

Zach Osborne – Broken Collarbone
Comment: Osborne sustained two small fractures in his clavicle at A3 during practice. He is expected to be ready when the Western Regional 250SX championship resumes in Houston.

Austin Politelli – Broken Femur
Comment: Privateer Austin Politelli suffered a broken femur while testing at Milestone the week before Phoenix. No timetable has been set for his return.

Anthony Rodriguez – Broken Collarbone
Comment: Rodriguez broke his collarbone when he crashed during the main in Atlanta. He underwent surgery and is expected to be off the bike for four weeks.