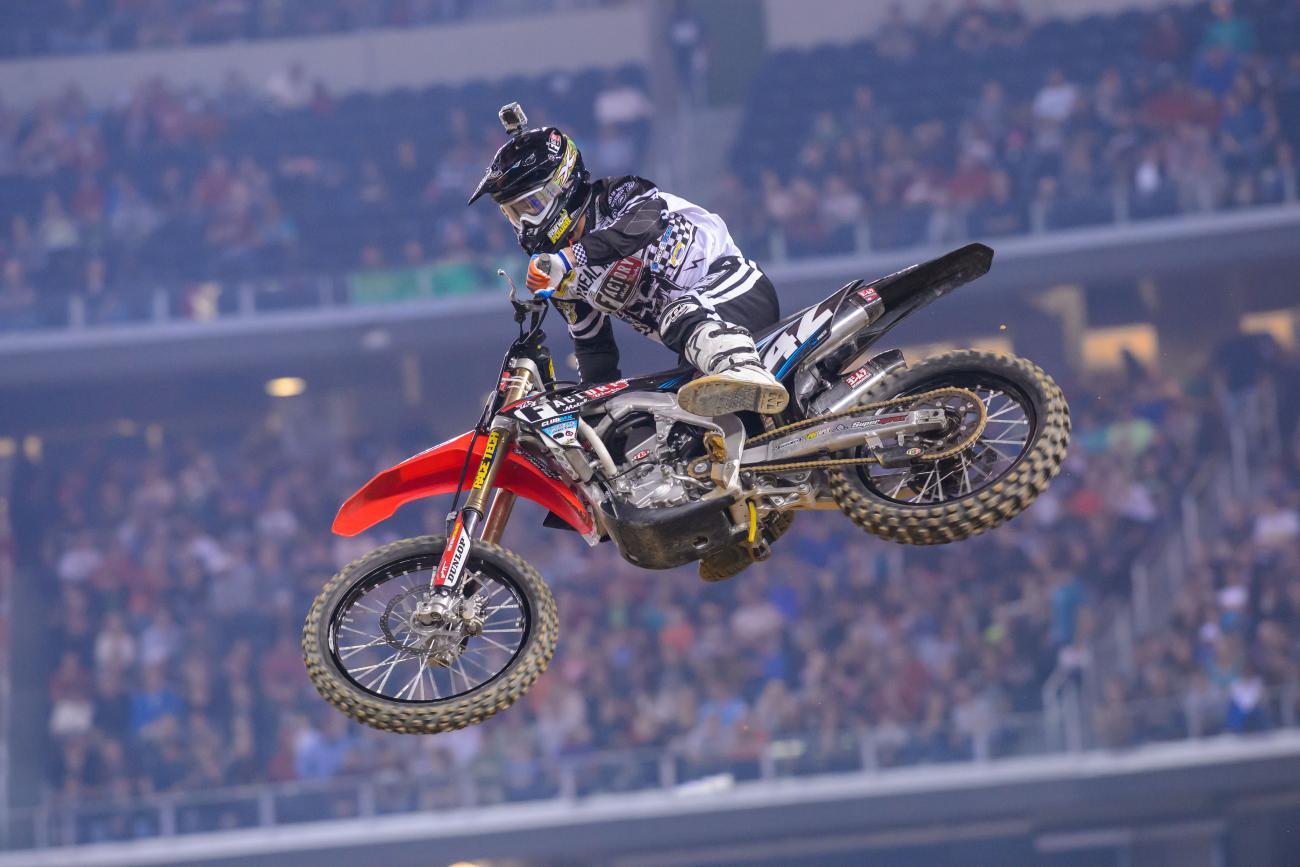 Yes, the opening round of the 250SX East Region was dominated by Monster Energy/Pro Circuit Kawasaki’s 1-2-3 sweep, and yes, the wonder kid known as Adam Cianciarulo went out and won the first supercross he ever entered. We all know that, and those two stories got a big part of the spotlight this past Saturday night.

Afterwards, well, well out of the spotlight sat The Factory Metal Works/Club MX rider Vince Friese. We mean literally out of the spotlight, because he was pitted way in the back of the pits, in the complete dark. We found him putting his gear away and looking ahead to Atlanta to, “Go back, get a little bit more time this week and keep improving. Hopefully make that next step up onto the podium.”

The same Vince Friese that sometimes wears the black hat was a hero in Dallas, finishing an impressive fourth. He did it for a new team that endured a massive accident on the way to the race and lost their brand new race trailer when it came unhooked and slammed into a telephone pole. The issue arose due to a result of attempted trailer theft. Luckily, the only things hurt were the trailer and some stuff inside. The team pitted under EZ-up’s in Dallas with no lights and a complete makeshift operation. So along with being a privateer in the class, Friese had to deal with the chaos around not only a brand new team, but a brand new team just trying to hold it together and rebuild on the fly.

“We were scrambling, parts were everywhere. The whole trailer freaking pretty much got flipped upside-down,” says Friese about the catastrophe. “My bike was mangled. For as crappy as a weekend as we got off to, I was happy to end it like that. Just going to keep working at it and hopefully be up on that podium is my goal, and go from there.”

Like he did last year, Friese rode 450SX on the West Coast, and he was once again impressive. He qualified for all seven main events and has looked pretty good on the bigger bike the last two years. But he’s in the smaller class to prove a point, get podiums, impress some people and maybe open some eyes. Riding in the back of the main event pack in 450SX isn’t for him, not now and maybe not ever.

Friese was impressive in outdueling a big name in GEICO Honda’s Justin Bogle, (afterwards Bogle said: “I was giving him heat. I had the blowtorch on him that whole main event and he wasn’t cracking. He’s definitely not an easy guy to get around.”). Last year more than a few people noticed the 250SX East wasn’t as strong as in years past and so maybe, guys like Friese were benefitting from that lack of depth. This year, he’s out to prove himself again.

“I definitely think it’s pretty stacked this year, a lot of good guys,” says Friese, who noticed the talk about his solid finishes last year. “I’m pumped. I didn’t like last year how people would say it’s not stacked, but realistically all the factory teams had their guys in there and it was the same. This year all the guys are still there and we’ll keep doing it again.”

After dealing with some adversity, great job by the The Factory Metal Works/Club MX team to get its riders (Friese, Jace Owen and AJ Catanzaro) to the race and great job by Friese for putting in a solid ride at Dallas. For handling it all and taking “first non Pro Circuit” honors on his privateer ride, we’re giving Vince this week’s Unsung Hero honors.