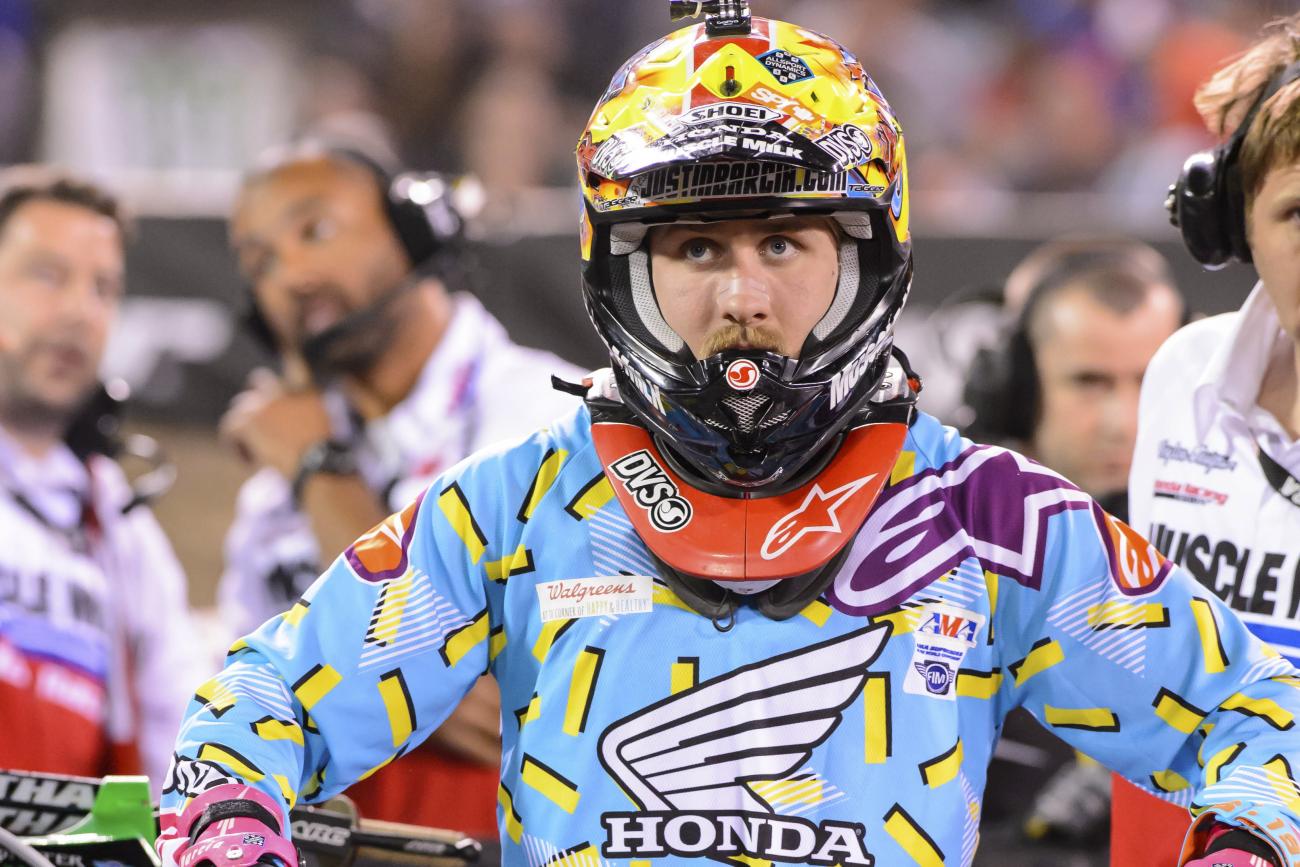 3 on 3 Big Questions in Supercross

1. What does Reed's win mean? Real title contender with multiple wins, or just one cool night?

Jason Thomas: I went into Anaheim 2 on record that it would be very telling for how Chad's season was going to play out. With one good and one bad weekend already, it was a tipping point and had it gone poorly again, all of the doubts and struggles of 2013 would be recurring. Clearly, he grabbed the bull by the horns and left Anaheim squarely in the points chase and had he not struggled at Phoenix, could have actually been the points leader! This season looks to be full of ups and downs for everyone but I think he is here to fight for the long run.

Steve Matthes: I took a poll on the Pulp MX Show the other night and no one on there could quite figure it out, also. We speculated on how many wins Reed can get this year and everyone seemed to agree he could win at least two more. Yes, some others made mistakes, but this was no gift win by any means.

Jason Weigandt: I’m still firmly in the RV-is-the-clear-favorite camp, because he could easily be 3-0 right now. I don’t know if anyone, including Reed, can straight go through him for the title. But if he makes more mistakes or gets hurt, I think Reed can be as good as anyone else, because he’s always consistent and will have a few more of these special nights where he’s really on. There will be days where he doesn’t quite have that level of speed, but he’ll salvage some points anyway. In just about any season that got crazy, Reed was right in the title hunt. He’ll be there again if the champ really has trouble.

2. What's up with angry Dunge?

Jason Thomas: I think Dungey finally listened to everyone telling him to step up his aggression. For the past couple of seasons, critics could say he let wins get away with a passive approach in key situations. Villopoto has proven more willing to force the issue and it has paid dividends. If Dungey wants this title, he needs to employ this aggression we saw, but eliminate the mistakes. I know, not easy! But this title is going to be a dogfight and if he wants it, he is going to have to go get it.

Steve Matthes: I don’t know, but I like it! Nothing Ryan did to Broc Tickle, Josh Hill or Ryan Villopoto was, in my opinion, out of line, but it represents a new Ryan Dungey. If you don’t think that Roger DeCoster or his dad or a combination of both talked to Ryan after his passive performance at Phoenix then I’d like you to also introduce me to the tooth fairy. Because I guarantee you someone got into Dungey’s head and told him he’s going to have to take this championship and not sit back and let it fall into his arms.

And good for Ryan, he forced his way into the main through the heat race and then tried to snatch a point away from RV in the last turn. I hope to see him do more of this down the road because if he looks around he’ll see that all his other competitors are doing the exact same thing. Bravo Ryan, bravo.

Jason Weigandt: For sure. It’s too much of a coincidence that everyone who watched the Phoenix race (including those that work around Dungey) said, “Dungey needs to pull the trigger” and then he went all Yosemite Sam at A2. It’s definitely what he needs—if that aggression gets you a few positions over the course of the season, it could add up to 20 some points, which could mean everything.

Of course, smooth riders usually say if they push any harder, they’ll crash (Kevin Windham has always said he felt on the edge even when he didn’t look it). Dungey led A2 and crashed. Can he really be more aggressive and stay consistent? His first race using this strategy ended up with his worst result of the season.

3. What's up with Justin Barcia?

Jason Thomas: I honestly have zero idea what is going on with Barcia. I haven’t seen him ride like this very often. Something happened in Phoenix and he’s lacked aggression ever since. He is normally a house-on-fire type rider and I’m just not seeing that right now. I saw it at Anaheim and I saw it briefly at Phoenix but it was simply not there on Saturday. I’m baffled. If I had to guess, and that's what I’m doing, I think that mentally he is a bit frustrated that it’s not coming more easily right now. Last year, he won Phoenix and even at Anaheim 1 this year, he looked like he was possibly the fastest rider, but a bad start kept him out of the running. Hopefully he can snap out of this soon because the sport is better when Barcia is at his best.

Steve Matthes: AGAIN, I DON’T KNOW. If anyone can figure this out, it’s Jeff Stanton. I put all my hope in Jeff Stanton to right this ship. And I really, really need six-time to come through because I was the one shouting from the mountain tops that Justin was going to give Villopoto the most trouble this year. Maybe it’s the silly season stuff (Barcia’s deal is up at the end of this year). Maybe it’s the bike. Maybe it’s the new haircut. Whatever it is, please fix it now, Jeff.

Jason Weigandt: This is what I feared with Barcia. I think he’s more heart than talent compared to some of the guys at the front, and sometimes he tries too hard to go fast, and then actually goes slower, and ends up with mediocre results. A guy like Ken Roczen can get a fast qualifying lap with a blindfold on, while Barcia can match that time, but only by pouring his heart and soul into it. And he’s willing to do that! That works, sometimes, but there have been other races in Barcia’s career where he was just a non-factor. I’m not talking terrible results, crashing out and DNFing, but just getting a fifth or something. He doesn’t walk out of bed fast every day, he has to earn it, and that’s hard to do every single week against guys who have it come so easy.

The main talent Barcia does have is starts, and they haven’t been there yet. He needs a few holeshots, STAT, to get back into this.