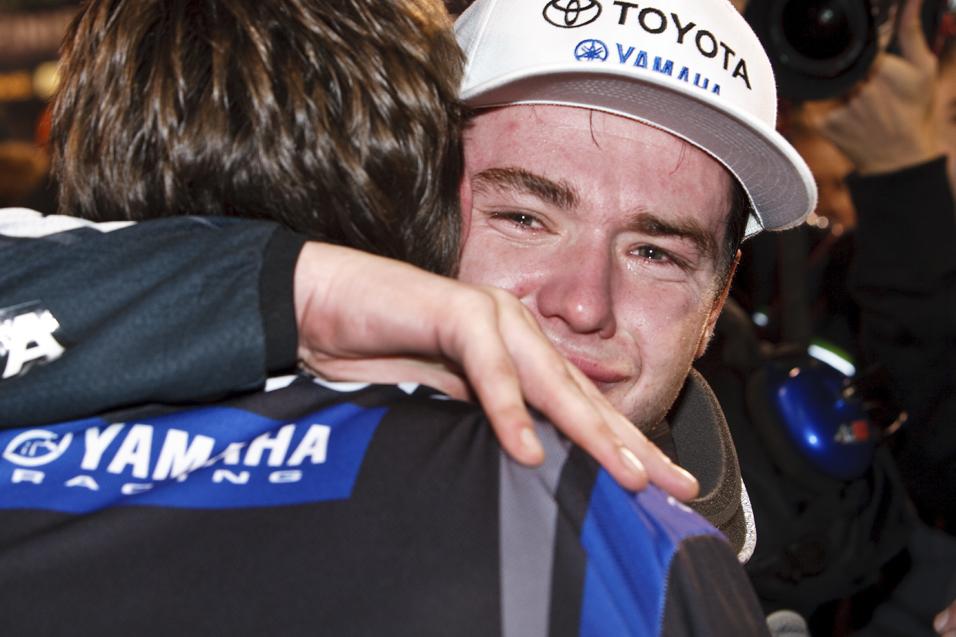 By Davey Coombs and Jason Weigandt

2013: Every year we hear “deepest field ever” before Anaheim, but even with all the huge names on the line, two unexpected contenders battled for the win. Davi Millsaps was way under the radar switching to Rockstar Energy Racing, and Trey Canard had missed nearly all of 2012 with a broken back. But there they were, leading the biggest race of the year, with Millsaps making a last-lap pass to get the win. In a strange, unfortunate coincidence, due to injuries, neither of last year’s first or second-place finishers—Millsaps and Canard—will be racing tomorrow night.

2005: Dubbed “The Perfect Storm,” this might have been the most hyped opener ever. You had James Stewart’s 250-class debut, Ricky Carmichael’s return from a missed 2004 season due to injury, Chad Reed defending his first title, and even Jeremy McGrath and Travis Pastrana making comebacks. That’s a lot of star power on that gate! Then it rained something fierce, and in the crazy mud, GEICO Honda’s Kevin Windham emerged the winner. 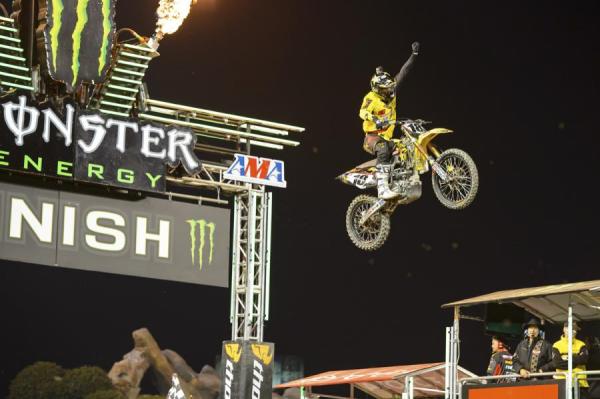 Davi Millsaps came in flying under the radar a year ago, but left with first place in hand.
Simon Cudby photo

2002: Ricky Carmichael’s AMA Supercross debut on a Honda ended in a huge endo and a DNF. David Vuillemin won the race on a Yamaha. Down in the 125s, James Stewart made what still might be the most hyped pro supercross debut ever, but Factory Connection Honda rider Travis Preston stole the win when Chris Gosselaar and Rodrig Thain crashed together on the last the last lap while battling for the lead.

1998: The strange upset for Sebastien Tortelli—his one and only AMA Supercross win—came as a part-time rider. Tortelli was only in town for a month, then he was to head home to battle Stefan Everts for the 250cc World Championship. The track was somewhat muddy, and everyone expected a resurgent Jeremy McGrath, now on a Chaparral Yamaha, to go after Jeff Emig and begin the battle to regain his #1 plate. In the middle of it all was Doug Henry, leading on a four-stroke Yamaha for much of the way before stalling. Yet lost in the hype was the methodical, winning ride of Tortelli, who was so invisible in the race for the win that the TV announcers thought he was an inspired lapper when he was battling Henry for the lead! 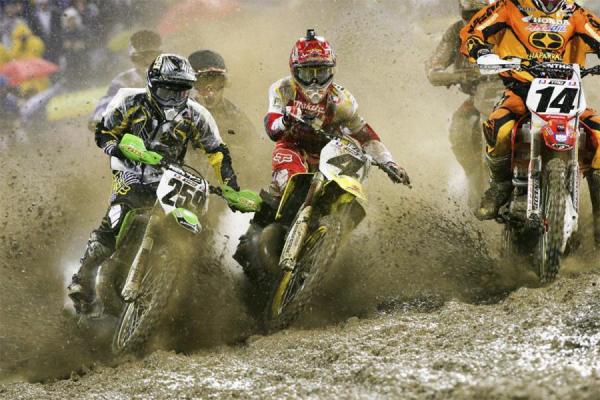 1997: Jeremy McGrath won the opener the previous three seasons, but all hell broke lose prior to 1997 when he split from Team Honda just a few days before the season and switched to Suzuki. The hastily arranged marriage left MC behind on bike prep, and then his ex-Honda teammate Steve Lamson ran into him early in the main. McGrath finished fifteenth (the worst finish of his career at that point), but there was still a silver lining for Suzuki: Greg Albertyn won his only career supercross that same night!

1986: It’s still considered the greatest single supercross race of all time, and for good reason: Honda teammates Ricky Johnson and David Bailey battled for almost the entire twenty laps before Bailey finally prevailed. Ironically, defending series champion Jeff Ward failed to qualify on a disastrous night for the Kawasaki rider. You can watch the race here. 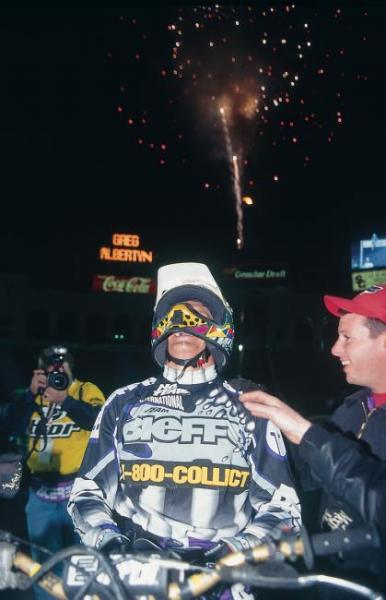 1983: David Bailey and Johnny O'Mara announced their arrival as title contenders by going 1-2 at the Anaheim SX, which was broadcast on network television one week later. The race included an astonishing lineup of supercross legends, though not Donnie Hansen, the defending champion. His career had been derailed the previous September with an accident in Germany, which meant he could not defend his #1 plate.

1979: The 1979 AMA Supercross Championship began in Oakland, of all places, on a sand track. The crafty veteran Jammin’ Jimmy Weinert showed up with two things that caught everyone’s attention: a neck brace and a paddle tire. He used both in the main event, not only psyching his competition out but truly outrunning them as well. Within a week, paddle tires were banned. 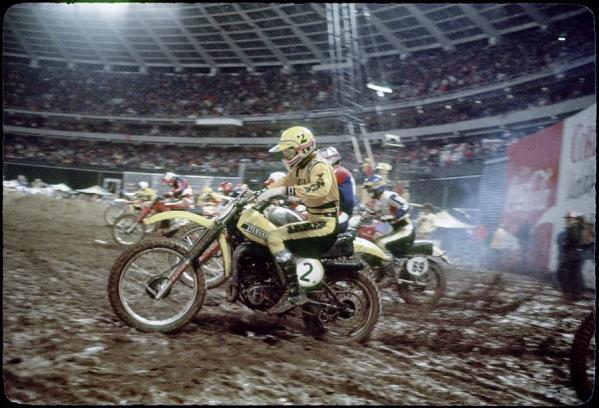 1974: The very first AMA Supercross opener—though back then it was called the Yamaha AMA Super Series of Motocross! It took place on the infield at Daytona International Speedway, and the winners were Yamaha’s Pierre Karsmakers (250 class) and Roger DeCoster (500). Each class ran three motos.

2009: The James Stewart/Chad Reed rivalry was already smoldering when Stewart crashed in the whoops and took Reed down with him. Then Stewart tried to push his bike off the track and smashed right into Kevin Windham! Through all the carnage, Josh Grant took the lead, only to get banners caught in his rear wheel and nearly lose it all on the last lap. He held on for his only career SX win.