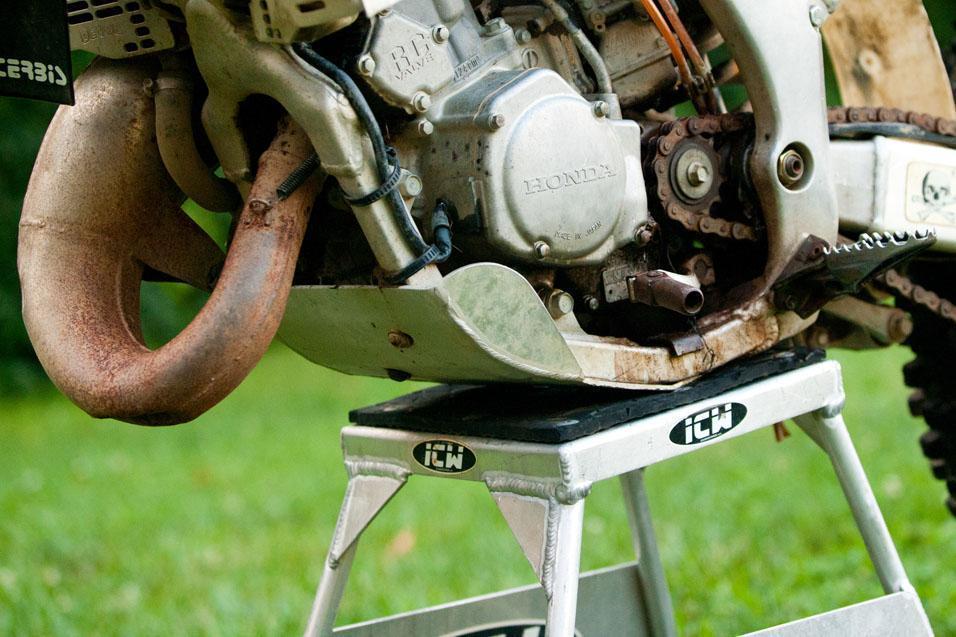 October 29, 2013 2:50pm
by: Aaron Hansel
If you’ve found yourself in the market for a used bike recently, you’ve probably become painfully aware of just how much junk is out there. But, one man’s junk is another man’s treasure, and that’s especially true in this column, where we showcase some of the best “gems” for sale on the internet. Enjoy! 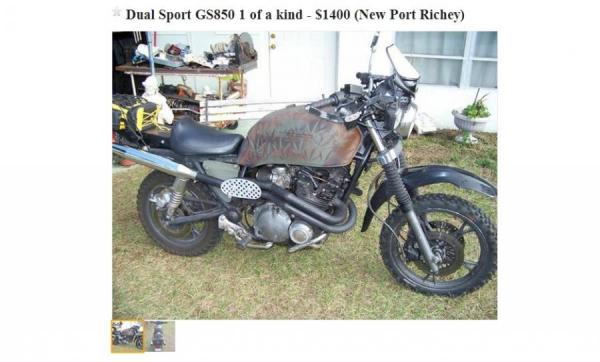 From the new Unit Skycraft freestyle prototype, to the Service Honda aluminum-framed CR500, bike conversions are nothing new in the motorcycle world. However, we can honestly say that this ridiculous contraption is still a surprise for us. How would slapping knobby tires onto an old Suzuki 850 street bike even occur to someone? The headline says one of a kind, and there’s a reason no one is lining up to copy this project. There’s the off road headlight mounted above the stock unit, bark busters and the moto fender up front. What’s that all about? Have we somehow stumbled on the genesis of today’s growing adventure bike market? We were struggling to figure out what crazy purpose this bike might serve, until we noticed the custom pot leaf camo paint on the tank and the large capacity rack on the custom rear fender. The seller says “this thing screams fun,” but with that paint and preposterous claim of fourteen inches of ground clearance, we say it screams “nefarious green-thumbed owner.”

There are some bikes that make it into this column that, even though they’re completely absurd, we wouldn’t mind swinging a leg over. This is not one of them. Even though the bike is surprisingly clean for what it is, it’s still a big, heavy outdated machine on knobby tires. The license plate says “2 Creepy,” and we agree. 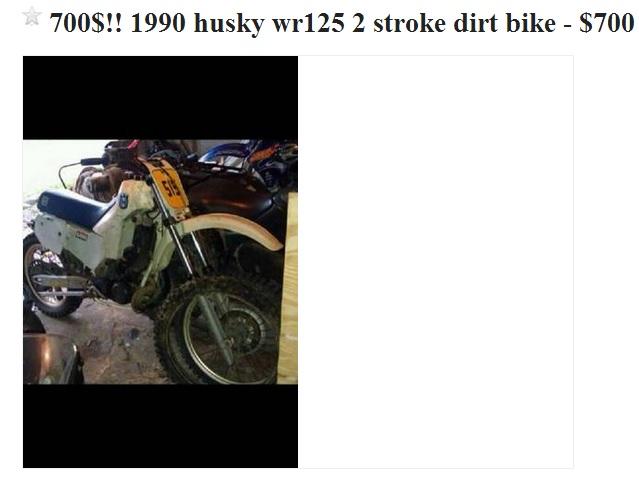 As hopeless as some of these rat piles are, their entertainment value is often exceeded by the text of the ad itself. Check out what the seller had to say about this Swedish shitbox:

“I have a 1990 Husqvarna wr 125 2 stroke dirt bike runs good flat front tire but I have a brand new tire and 2 brand new inter tubes for front and rear. Sat for a little so it could use a carb cleaning. The kick start slips a little but I'm sure it can be fixed. By slips I mean it don't catch 100% of the time. A new spring and you'll be fine. Or you can bump start it. No trades cash only. And don't try and low ball me I know what the bike is worth. My name is duallen and you can call or text me at…”

Generally when you’re selling something you clean it up a bit first, which typically includes fixing a flat tire, especially if you don’t want to get low balled (by the way, what the hell is an inter tube?). Seeing as how this bike is missing parts, has a flat tire and a malfunctioning starter, we’re guessing this guy missed that memo. Hell, he didn’t even bother to move the bike to get a good picture for the ad! If he took the same lackluster approach in maintaining this bike that he did in putting together the ad, it’s only a matter of time before that sucker grenades. He knows what it’s worth, and we say anything above zero dollars is too much. We forbid any Racer X readers from purchasing this bike. 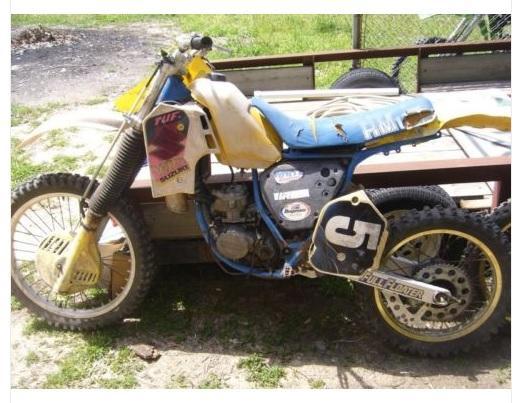 Most of the ads featured in this column are from Craigslist, but this beauty comes to you from the pages of eBay. It’s a prime example of the kind of junk that people are actually attempting to trade for cash. Call us crazy, but if you’re going to sell a motorcycle, it might help to attach the side number plate, or at least remove it all together. The bike is also missing parts, including the carburetor, and the cylinder isn’t even bolted to the engine. Check out that gap! Judging by the appearance of this wreck, it’s been stored outside. That’s okay, we’re sure no moisture got into the engine and turned the inside into worthless heaps of rust.

The bike is literally useless. The outside is haggard and smashed by the sun, and the likelihood of anything on the inside being functional is about as probable as a two-stroke fanatic coming out of his basement, removing his tin foil hat and admitting that four-strokes are actually pretty good. We’re pretty sure that the only way anyone is going to bid on this thing is if they mistakenly think they are getting paid to take it.

In most cases, the sticker on the swingarm that says “Full Floater” refers to the rear suspension but in this case it refers to the entire bike, which is nothing but a gigantic turd. Hold your breath, flush it and turn on the fan. 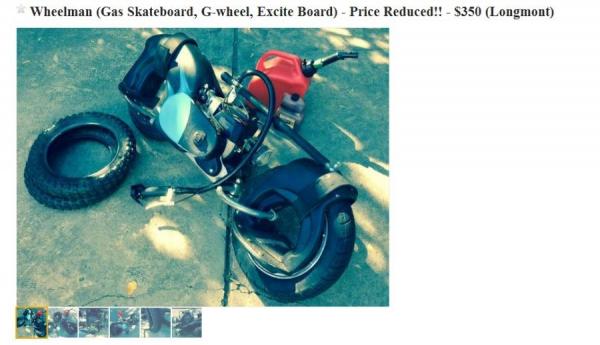 We named this one the DUI Special not because we suspect that the drunken operator is likely to tangle with the fuzz while riding this death board (although that’s a definite possibility), but because we think getting one’s license suspended is the only reason anyone would start riding something like this to begin with. This particular seller must have recently gotten his license back, and is no longer in need of this ludicrous form of transportation, hence the sale of the unit.

In the picture there’s a fuel can. One would assume that it’s for fueling up this quirky device, but we think a better use would be to pour its contents all over this skateboard from hell and let it burn. Unless you’ve recently had your license suspended and need a way to scoot to work, stay away from this tooth chipper.