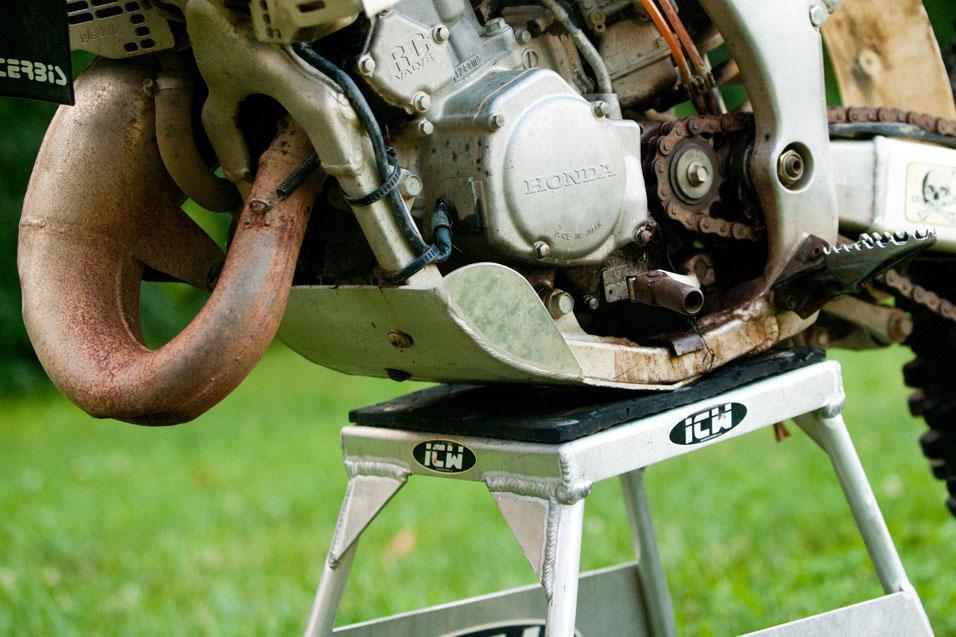 Have you ever put in a request for something specific for your birthday or Christmas and received something similar, but not quite what you wanted? Say you wanted some DeWalt power tools but got Makita instead. Both brands are awesome and you’re out of your mind if you’re upset, but damn it if you can’t help but want that flashy yellow (the color of DeWalt) drill in your hand as you attempt to drill out that frozen chain adjuster bolt! Well, we’ve got a suspicion that the seller of this Honda might be in a similar situation. He really wanted a Kawasaki, but somehow ended up with a Honda, prompting him to ditch anything red (except the grips, strangely) and go green with the frame and triple clamps.

What we don’t have an explanation for is the color of the engine, which appears to be black. Some of the aluminum elements, like the shifter for example, are relatively clean, so it can’t be just dirt all over the engine, right? What’s going on there? It can’t be chain lube fling-off can it? You’d have to pass out drunk with a can of PJ1 in your hand with the spray nozzle jammed down in order to get that much fling-off! But hey, judging by how much lube is on the rear wheel, and the presence of a mini-fridge in the corner (the front chain guard appears to have been removed as well), perhaps that’s not such an outlandish explanation!

The Verdict
Deep down we don’t think this dude really wants to get rid of his cherished steed. If he did, he would have at least taken a hose to it before snapping the picture, and he certainly wouldn’t have left the seat unbolted and sticking up like that. He probably would have put a front number plate on it too. That said, we recommend you give him a call anyway. He’s got a massive television in the garage and, as mentioned earlier, there’s a mini-fridge in the corner. What else do you need for an awesome day of watching moto? 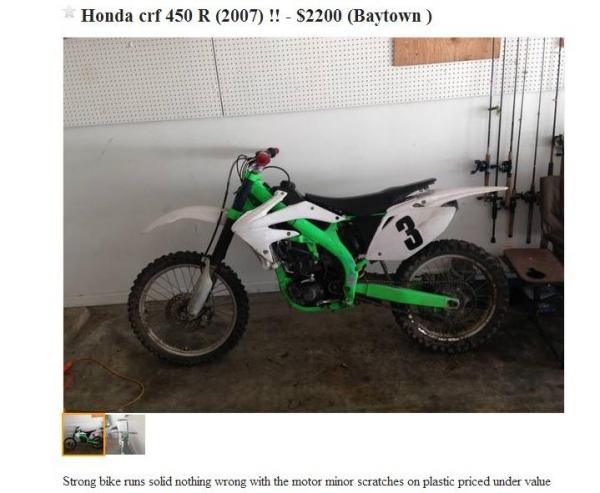 The most troubling part of this bike is that it has to be built for a kid, right? That thing is just way too small for an adult to ride for any period of time, and with an adult’s weight sitting near the back of the bike, can you imagine what would happen when the power came on? There’d be bigger loops and body rolls than an air show featuring the Blue Angels! And if the rider miraculously managed to keep the thing on two wheels he’d better hope he’s got lots of room to slow down; those drum brakes aren’t stopping anything quickly!

The Verdict
After raising a concerned eyebrow at the seller’s judgment for creating this blasphemous piece of equipment, we must consider the fact that perhaps he’s crazy like a fox, and a little evil. Think about it. If you really want to hurt somebody but don’t want to be held accountable, just put them in a situation where they’re likely to hurt themselves on their own. This motorcycle is that situation! We suspect the only reason that the seller is offing it is because he’s already used it to dispose of all his enemies. 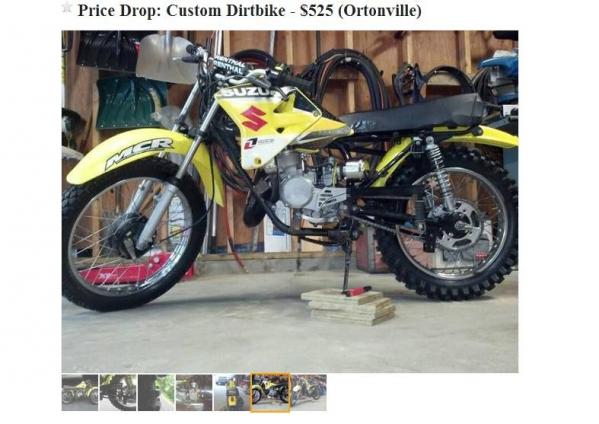 The sales pitch on this beast is superb. In fact, it’s so entertaining we’re just going to take a back seat on this one and let the seller do most of the talking.

“1981 KDX 420 vintage raceing enduro VARY RARE!! Seen one on e bay like it in Michigan going for $2000 obo. Blow away any 450! NO JOKE. Go up any mountain. THIS IS THE BEAST!! Googled it & it says it does 99 MPH stock. This bike is built well & made to last. Almost new tires. I'm asking $450 but need money ASAP so make an offer. Selling it fast is my main goal due to finanical hardships.Text or call for more info”

What makes even less sense than the 99 mph claim is the condition of the swingarm. Seriously, check out how clean that sucker is! The rest of the bike is totally clapped, but you’ve got to toss on sunglasses just to look directly at the swingarm. Our guess is that at some point somebody had one of those beer-fueled nights of inspiration and decided to start restoring the thing, starting with the swingarm, only to wake up the next morning and realize the futility of the endeavor.

The Verdict
The only way this vintage iron is going to blow away a modern 450 is if said 450 doesn’t have an engine in it. Furthermore, we named this bike The Firecracker not because we believe it possesses explosive speed, but because, just like cheap firecrackers, you never know if it’s going to blow up or not when you fire it up. 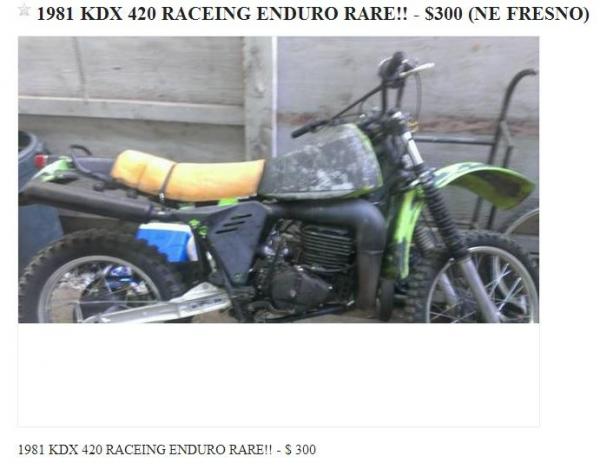 If you’re a regular reader of this column’s comments section, you know that not everyone takes this material in the light-hearted, tongue-in-cheek manner in which it’s intended. In fact, some readers get downright angry, believing Junk Bikes to be offensive and disrespectful. To a certain extent it is, although I could argue that I’m helping sellers by increasing the number of views their ads get. In any case, this final entry is for the readers who would crack a smile quicker by watching me get my ass kicked than by reading this column. I found this pile of utter crap in my local Craigslist postings, so if this column stops or if a different RX staffer picks it up, you’ll know I got my face rearranged by an angry local. Hey, give the people what they want, right?

The model name of this quad is the lightning, which is funny because in its current condition it looks as though the moto gods, no doubt angry that this pile even existed in the first place, threw down an actual lightning bolt, executing this hunk of four-wheeled scrap metal with extreme prejudice. Either that or Bubba from the Crusty Demons of Dirt hopped on this thing and tried to hit the triples. Look how curved those A-arms are! And why is the engine out of the thing? Did it just fall out when Bubba cased hard?

Hey, at least the seller is honest and says this thing is for salvage, although you’d have a hard time convincing even a blind person that this thing was good for anything other than a reminder that two wheels are better than four. Looking at this thing, it doesn’t appear that there’s much that could be salvaged. Just about every piece of metal is twisted, the engine is sitting in the dirt with an open port where the carb/intake manifold should be, and the size of the engine isn’t even listed. The only items that may be of value are the tires, which look like ITP Holeshots, although just like this quad, I’m sure they’re worthless imitations of the real thing.

The Verdict
Parts aren’t always readily available for these knock-off machines, so If you own an identical quad and don’t mind a piece of twisted metal taking up space in your back yard, or you’re simply in need of a gigantic paperweight, pick up the phone and call this crocs-wearing seller. Otherwise, keep your distance. 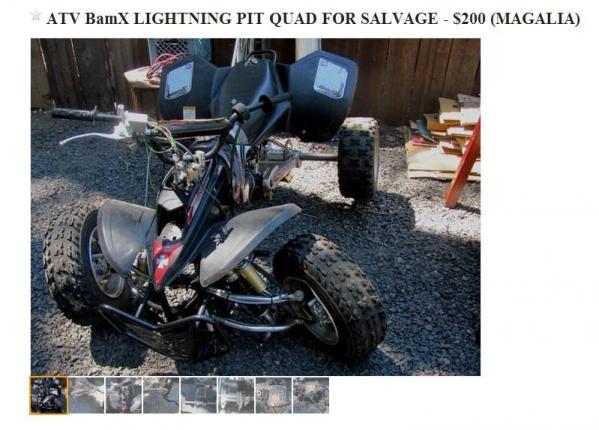 As always, send an email to aaron@racerxonline.com if see a bike you think would be a good fit for this column.