MORGANTOWN, W.Va. - Just one day after the on-track conclusion of the Lucas Oil Pro Motocross Championship, sanctioned by AMA Pro Racing, took place at Lake Elsinore Motorsports Park, MX Sports Pro Racing and Alli Sports, a division of the NBC Sports Group, honored and recognized the moments and individuals that helped make the 2013 season memorable with its annual Season Celebration this past Sunday.

South Coast Winery, located in Southern California's wine country of Temecula, was the setting for the festivities, as the industry gathered to celebrate the 2013 Lucas Oil Pro Motocross season.

NBC Sports and Fox Sports 2 host Jason Weigandt emceed the event, along with MX Sports' Tim Cotter. The pair led the way in bringing the motocross community together to pay respect to those who played an integral role in establishing 2013 as one of the most decorated seasons for each of these prestigious championships.

Monster Energy Kawasaki was recognized as the Motocross Team of the Year for the commitment, hard work and dedication that resulted in a successful 2013 season for riders Ryan Villopoto and Jake Weimer. Additionally, Monster Energy Kawasaki’s Dan Fahie was given well-deserved recognition as Team Manager of the Year for his great leadership in carrying the team to yet another championship-winning season. 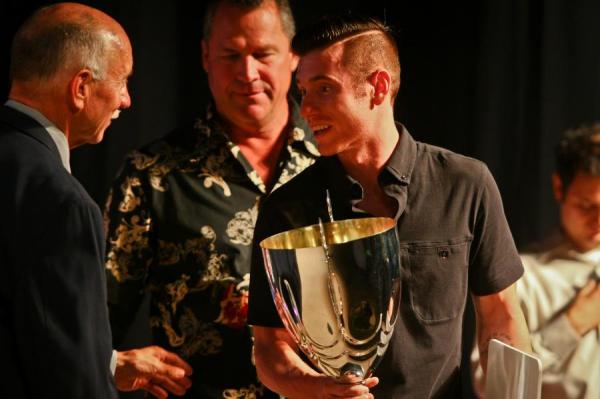 For the second time in three seasons, Ryan Villopoto (pictured) was crowned 450 Class Champion following a dominant season, comprised of eight overall victories and 18 moto wins. Villopoto was awarded the coveted Edison Dye Motocross Cup on behalf of his Monster Energy Kawasaki team. Villopoto shared the celebration with his mechanic, Mike Williamson, who was also honored as the 450 Class Champion Mechanic.

Villopoto also received the ultimate Oakley Bomb Award – Oakley’s one-of-a-kind wristwatch – as a result of tallying the most Oakley Bomb Fastest Lap Awards throughout the season. 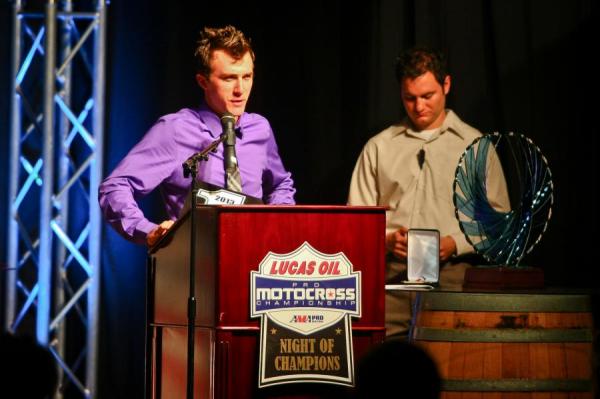 Eli Tomac (pictured) solidified the 250 Class title at the penultimate round of the championship, following an impressive eight-moto winning streak. After obtaining the red number plate at Round 6, Tomac held the points lead through the remainder of the season, ending with a class-leading total of seven victories. Tomac accepted the Gary Jones Motocross Cup on behalf of his team, while his mechanic, Brian Kranz, was recognized at the 250 Class Champion Mechanic.

Tomac was also awarded the final Oakley Bomb wristwatch for capturing the most Oakley Bomb Fastest Lap Awards in the 250 Class throughout the season. 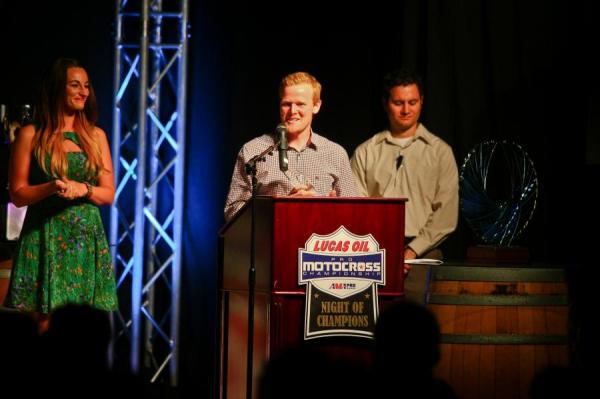 Following two seasons of bad luck and injury, Trey Canard (pictured) achieved his most successful season ever in the 450 Class, completing all 12 rounds of the championship en route to a fourth place finish. While Canard worked hard to rebuild his post-injury racing program, tragedy and disaster struck his native community in Oklahoma. Canard, with the help of his Honda Muscle Milk team, family members and friends, worked hard to help organize relief efforts for the deadly Oklahoma tornado. Because of his commitment to help others in spite of his own adversity, Canard was recognized as the Sportsperson of the Year. 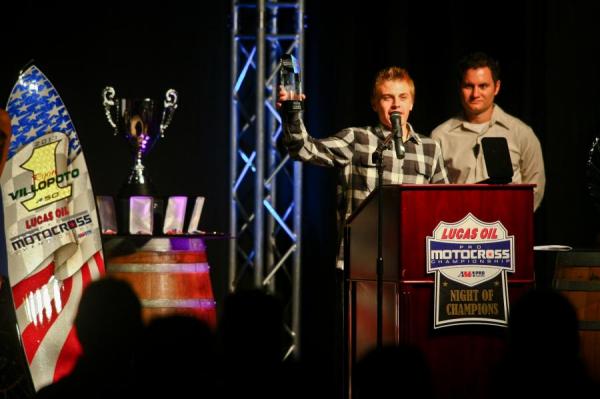 MYPLASH/Metal Mulisha/Star Racing/Yamaha’s Jeremy Martin (pictured) received Rookie of the Year honors for 2013, after finishing sixth place in the 250 Class championship. The Minnesota native showed consistent improvement throughout the season and gained valuable experience by leading several laps amongst a very talented field of 250 Class competitors.. Martin’s breakthrough performance at Round 7 began a string of impressive finishes by the rookie, including third overall at RedBud, second overall at Unadilla and several more notable performances. After his first full-year of competition in the 250 Class, Jeremy Martin will be a fierce challenger in 2014. 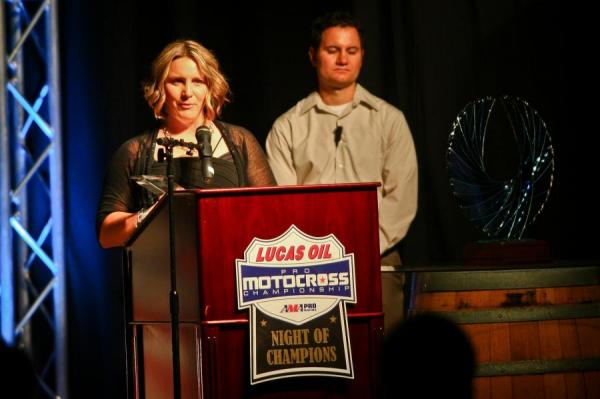 For the second consecutive year, KTM North America was awarded the Manufacturer's Cup as the most competitive brand across the 450 and 250 Classes.

Motorcycle-Superstore.com implemented an all-new holeshot championship program in 2013 where championship points were tallied over the course of 12 rounds in both the 450 and 250 Class, thus creating a mini-championship inside the series championship. GEICO Honda’s Wil Hahn topped the 250 Class Championship and was awarded a $15,000 check on Sunday. Yoshimura Suzuki’s James Stewart accumulated the most points in the 450 Class despite missing the final round of the series, earning the end of season bonus of $25,000.

As the festivities concluded, attendees enjoyed the scenic landscape of South Coast Winery with live music, dancing, and appetizers under the stars.

Many other individuals and companies were recognized on Sunday, including Lucas Oil, whose commitment to the sport of motocross as title sponsor of the championship has helped the series reach new heights in terms of attendance and exposure. Additionally, Alli Sports, the Action Division of NBC, was recognized for its commitment in elevating the sport of motocross by offering the most comprehensive television package in series history. Longtime supporters like the Asterisk Mobile Medical Center and Gear Services were also given special recognition, while the Oakley Bomb Award program highlighted the company's third year of series sponsorship.