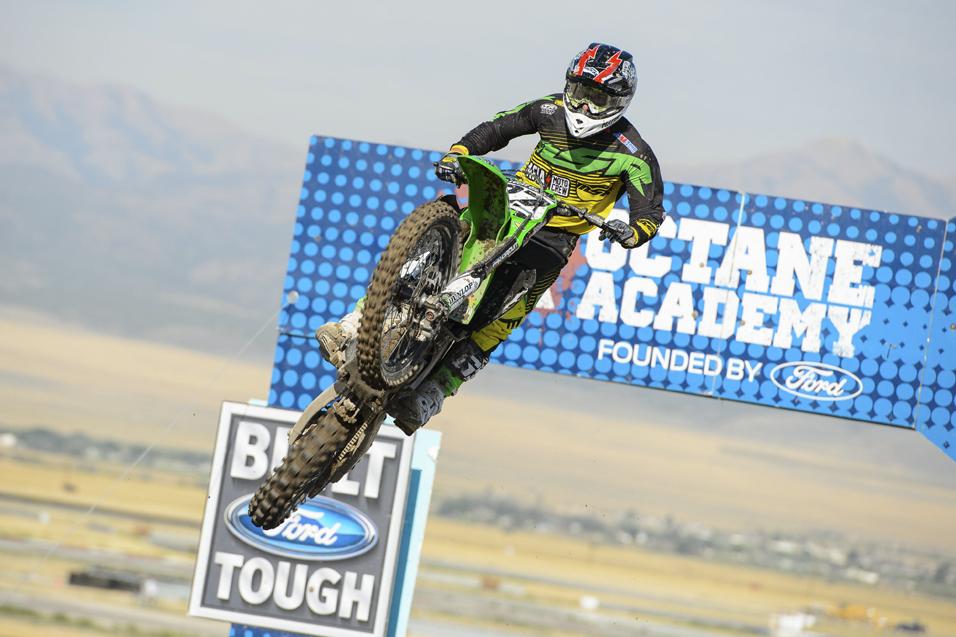 Although still bothered by a wrist injury that keep him out of the first seven rounds of Lucas Oil Pro Motocross BTOSports.com KTM’s Matt Goerke turned in his best result of the season at Utah. Goerke’s ninth in moto 1 marked his first moto top ten since Pala in 2010.

Rock River Yamaha’s Ben LaMay garnered his first top ten overall on the season at Utah. It was the first time since Lake Elsinore a season ago that LaMay has finished inside the top ten overall.

Right when it looked like Tyla Rattray was going to turn the corner on his season, the dark cloud returned. Following a fourth place in moto 1—his best moto finish since moto 2 at High Point—Rattray had worked his way into another top five position in moto two, after starting outside the top ten, when his motor let go. Rattray would finish twelfth overall on the day.

Just a week removed surgery on his hand, Ryan Sipes returned to action at the Utah National. Sipes, who was also dealing with spasms in his back, gutted out a seventh in the first moto and proceeded to secure the holeshot in moto 2. But the spasms in his back returned, relegating him to a DNF. “I’ve been hurting real bad from my crash at Millville and it’s been 11 days since getting surgery on my hand,” said Sipes in a statement released by the team. “I was just hoping I could hang on. On Monday I could barely move around so I’m lucky I got through one moto. Still it’s a bummer to get the holeshot and not finish the race.” 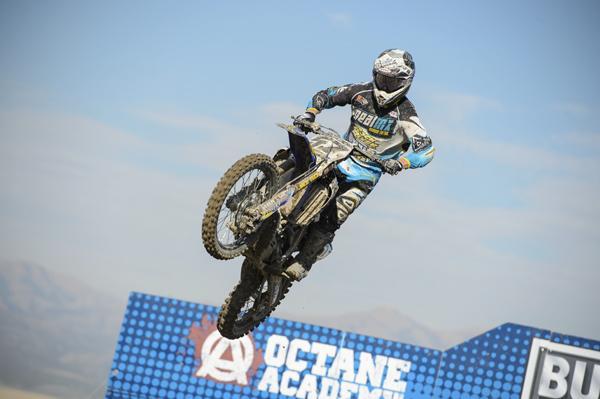 Rockstar Energy Racing announced they were headed to KTM land next year, with Davi Millsaps, Jason Anderson and Joey Savatgy as the team riders. What about the other three riders on the team this year, like Nico Izzi, Sipes and Blake Wharton? So far, it looks like they’re on the market, but RER team manager Dave Gowland indicated there might still be something in the works for Sipes.

For only the second time this season privateer Derek Anderson scored points in both motos. Anderson finished eighteenth overall on the day via 19-16 scores.

Toyota/JGR Yamaha’s Josh Grant has been surging as of late, but he was not in action at Utah. A family emergency involving his son Wyatt kept him from the track. Here’s hoping everything turns out okay with the Grant family.

Munn KTM’s Evgeny Mkhaylov shocked the 450 Class with a twelfth in the second moto on the heels of an eighteenth in moto 1. The Russian’s fourteenth overall marked a career high for the KTM rider.

Since a moto podium at Budds Creek, Monster Energy/Pro Circuit Kawasaki’s Darryn Durham has struggled to regain his form. Utah was a turning point for Double D. He ran up front in both motos, leading to a sixth place overall finish—his best overall finish of the season. Durham’s Monster Energy/Pro Circuit Kawasaki teammate Martin Davalos didn’t have the same success, as he had bike problems early in the second moto while running up front.

Late into his comeback season (an injury kept him out of racing in Monster Energy Supercross) Nick Wey made some strides at Utah. His 17-13 scores for fifteenth overall gave the Mafia MC Kawasaki team owner his largest points haul of the season.

As if Weston Peick’s fourth overall finish in the 450 Class wasn’t impressive enough, it’s key to remember his bike is so beat up that it wouldn’t even start! Peick had to rely on bump starting all weekend since the traditional kicker wasn’t getting it done. Good thing he didn’t stall in either of his motos. 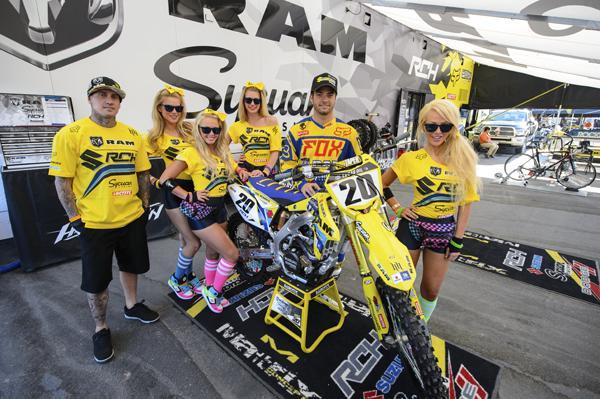 The Utah National was supposed to represent a big day for Suzuki, with the brand celebrating 50 years in the U.S. A bunch of Suzuki riders were scheduled to participate in Thursday’s press day, but it didn’t work out. James Stewart was still ailing from a neck injury and couldn’t make it, and Mike Alessi (SmarTop MotoConcepts team, riding a Suzuki) was also out with a shoulder injury. Stewart later hurt his back in the first 450 moto and didn’t finish. Rockstar Energy Racing? Yeah, they just announced they had signed with KTM for 2014, so no love there. At least RAM/RCH Racing got in on the act with retro Mark “The Bomber” Barnett inspired graphics on Broc Tickle’s bike, but Tickle ran into mechanical troubles in moto two. Better luck next time!

Following three moto podiums over the last four motos MyPlash/Star Racing rookie was brought back to Earth at Utah … literally. Martin crashed over a blind jump and then was landed on by Lucas Oil/TLD’s Cole Seely. Martin checked out okay and returned in the second moto to finish sixth.

Michael Leib made his long-awaited Lucas Oil Pro Motocross debut at Utah. After more than three years in Europe racing the GPs, Leib secured a fill-in ride with Rockstar Energy Racing for the final two nationals. Leib finished the first moto sixteen but tweaked his hand. He tried to ride the second moto, but was unable to finish. “I sprained my hand a bit in the first moto and made it a bit worse in the second moto,” said Leib in a statement released by the team. “Just going to have to tape it up and go.” Leib is expected to race the Lucas Oil Pro Motocross finale at Lake Elsinore.

BTOSports.com KTM’s Michael Byrne looked to be in serious trouble last weekend at Unadilla when he was carried off the track in the same manner he was last year at the race, when he broke his leg. Luckily, this time around Byrner only suffered a sprained MCL in his knee, which hurts, but is certainly better than a broken leg! He went 21-15 for twentieth overall in the 450s. 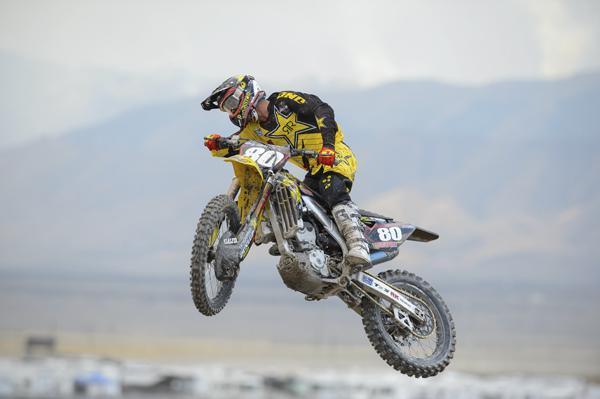 When we wrote our Going for the W piece on Jason Anderson on Saturday, we were expecting his previous success at the Salt Lake City supercross to perhaps guide the way toward a solid day. And he’s from New Mexico, and claims this as a home race. Instead, he went 13-28 for nineteenth overall, one of his worst races of the year. What happened? We’ll let the Rockstar Energy Racing PR explain. One of the problems he has experienced at both Colorado and again here at Miller Motorsports Park was altitude sickness. He has found that he is very susceptible to elevation when pushing his body as hard as a top motocross rider must. It proved to be too much for him to conquer, and the ailment coerced him to exit the track before moto’s end. So much for being comfortable in these surroundings!

Lucas Oil Troy Lee Honda rookie Shane McElrath has got the consistency part of pro racing dialed. In his four pro motos, he’s gone 17-17-17-16. One step at a time!

In his second race this year back from an elbow injury, Jesse Nelson, McElrath’s teammate, went a solid 14-15 for thirteenth overall.

Team Tedder/Monster Energy Racing’s Dakota Tedder scored his first points since moto 1 at RedBud—his first race back from injury—in the second moto at Utah with an eighteenth. Tedder would finish just outside the top twenty overall in twenty-second.