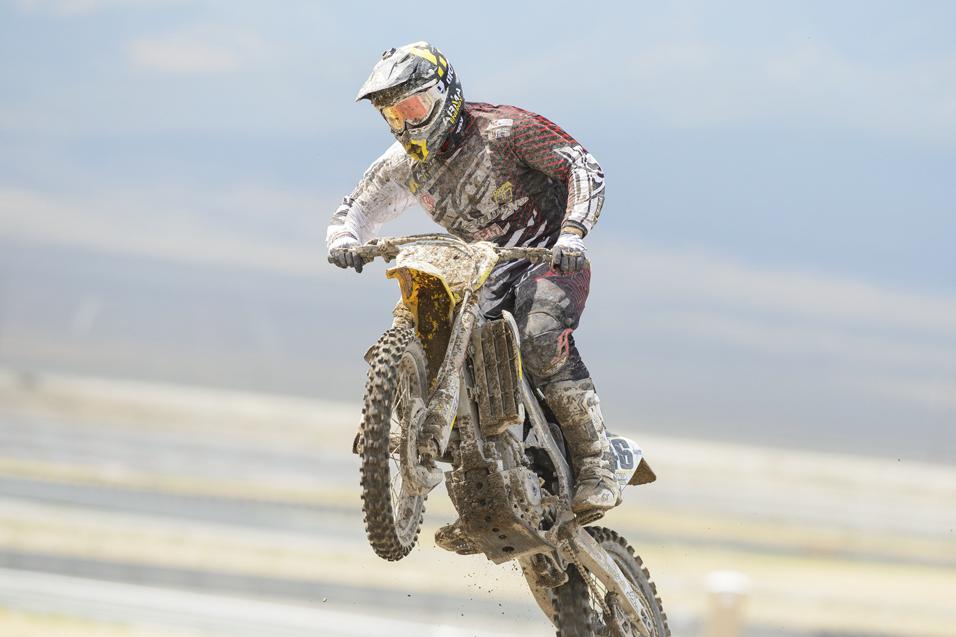 That’s it. Round eleven of the Lucas Oil Pro Motocross Championship is over and the brand new venue just outside of Salt Lake City, Utah was a refreshing reset of the series. The man-made track was met with mixed reviews and even a mid race windstorm couldn’t stop some great racing.

As we said the track was met with mixed reviews. The man-made motocross track dumped right on the car track at Miller Motorsports Park had some big jumps, a sand section and it got rough by any standards. The facilities were outstanding with concrete pits, easy access to everything, suites for VIP’s, a real pressroom and everything that is needed to make watching motocross more comfortable. There was even a bit of elevation!

And that’s it folks. Monster Energy Kawasaki’s Ryan Villopoto needed to go 1-1 at MMP to clinch the 450MX title and that’s exactly what he did in dominant fashion. There was nobody even close on this day. Villopoto clinched the title a round early with two great rides and now has five motocross titles to his name including never losing one where he did not get hurt and drop out of the series. In other words, he’s perfect when he doesn’t get hurt.

And in a bit of an unexpected title clincher, GEICO Honda’s Eli Tomac won his first MX title when a last lap pass by defending champion and Monster Energy/Pro Circuit rider Blake Baggett on Red Bull KTM’s Ken Roczen helped Tomac have the cushion to not make the last round matter. Tomac himself, much like last weekend in Unadilla, was unstoppable in going 1-1 on the day.

A few of the 250MX riders were looking for the red flag midway through the second moto when a massive windstorm came ripping through the area. Banners were everywhere, the dust was really bad and riders were having to adjust in the air for the jumps. The officials never threw it though and it calmed down after about 5 minutes of being a little scary.

Red Bull KTM’s Ryan Dungey had a good day in going 2-2 behind Villopoto and Honda Muslce Milk’s Trey Canard, despite not qualifying very well, rebounded from scoring no points at Unadilla with a 3-3. All three riders were noticeably better than the rest of the field.

Privateer rider and part-time Lucas Oil Pro Motocross competitor Weston Peick had a career day at MMP going 5-5 for fourth overall. The privateer displayed never-say-die riding and some great speed and endurance in moving through the pack to get those finishes.

Monster Energy/Pro Circuit Kawasaki’s Tyla Rattray showed some real speed in getting a fourth in moto one and was ripping through the pack and most likely going to get another fourth when the motor went on his Kawasaki. Bad break for Tyla and the team,

Speaking of bad races, Team TwoTwo’s Chad Reed pulled off the track around halfway in moto 1 and didn’t start for moto 2. It’s not clear what the problem was with Reed but it was a bad day in a bad season for Reed.

Yoshimura Suzuki’s James Stewart was third when he over-jumped a jump and flat landed it, which caused him to hurt his back. Stewart pulled out of moto 1 and didn’t start moto 2.

Defending champion Blake Baggett had his best race in a while in going 2-2 behind Tomac for second overall. Baggett did it the hard way also in coming from the back of the pack.

Rookie Adam Cianciarulo had a breakout day at MMP with a third in the first moto. It was the kid’s first ever podium and showed his potential out there. In the second moto he crashed in the first turn and was forced to come from dead last to ninth, which put him fourth overall, just off the podium.

A couple of GEICO riders that have been strong this summer have been Zach Osborne and Wil Hahn but at MMP, neither rider had days that they would like to remember as the started up front but didn’t finish up there.

In the 450MX class, it was a weird site to see only 24 bikes still going at the end of the moto. A lot of DNF’s and DNS’s created one of the weirder sites of the year as riders were dropping out left and right.

PC rider Darryn Durham had his best race in a while as he ran in a podium spot for much of the second moto and ended up with a fifth. DD got a sixth overall on the day.

JGR Yamaha’s Josh Grant was a late scratch with a family emergency that caused him to miss the race.

Rock River Yamaha’s Ben LaMay had a great day in getting tenth overall on the day. LaMay wasn’t up front to begin with but slowly worked his way up there by moto’s end. Privateer Russian Evgeny Mikhaylov also had a career best day of 18-12.

Nick Wey made his return to the series and also had his best weekend of the year and ended up 17-13.

Team USA was named before the race and it was Dungey, Tomac and Honda Muscle Milk’s Justin Barcia. We learned last week that Villopoto is needing surgery and is forced to miss the event so Barcia got the nod instead. The Motocross des Nations is in Germany this year and good luck to the red, white and blue.