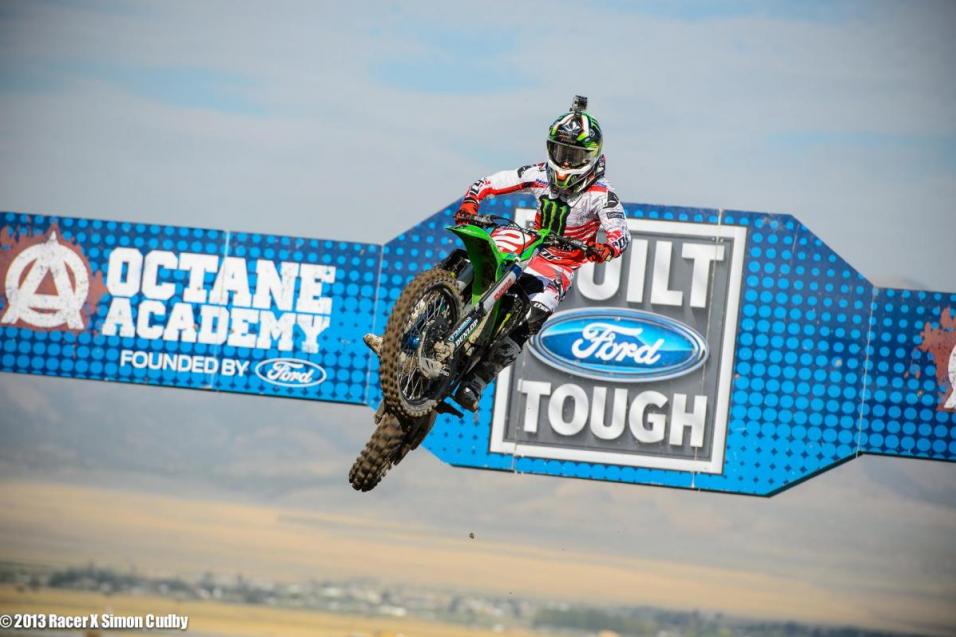 The second 450 moto was certainly a race of attrition. Four riders—including Stewart and Reed—did not line up for the start and only 24 riders completed the race. However, this had little impact on the championship battle between Ryan Villopoto and Ryan Dungey.

Villopoto put himself in a good position to seal the championship right off the start, placing his Kawasaki right behind Motorcycle Superstore Holeshot Award winner Ryan Sipes. Trey Canard separated Villopoto and Dungey, and Justin Brayton rounded out the early top five with Justin Barcia right behind him.

Villopoto made quick work of Sipes, passing him within the first few turns. Dungey was also able to make an early pass on Canard for third, and then he got Sipes for second before the end of the first lap. Villopoto only had a two-second lead on Dungey going into the second lap, so he wasn’t in the clear yet.

Barcia was able to move past Brayton for fifth before the completion of the first lap. Sipes ended up dropping behind both Canard and Barcia after a few laps, allowing the two Honda Muscle Milk riders to find each other as the race progressed.

Rattray was once again on the move in the second moto. The Pro Circuit Kawasaki rider started outside of the top ten and charged forward all the way up to fifth, right behind Barcia. Rattray looked poised to challenge Barcia—who wasn’t too far from Canard at the time—but was spotted pulling off the track after putting in such an impressive rider through the first half of the moto. Malcolm Stewart and Broc Tickle also went back to the pits early around the same time.

Villopoto had opened up a 10-second gap on Dungey by the halfway mark and continued to put in strong laps until he took the checkered flag for the championship. Dungey and Canard rounded out the podium, with Barcia and Peick taking top-five positions. Peick, a full-on privateer, was able to put in an impressive 5-5 day.