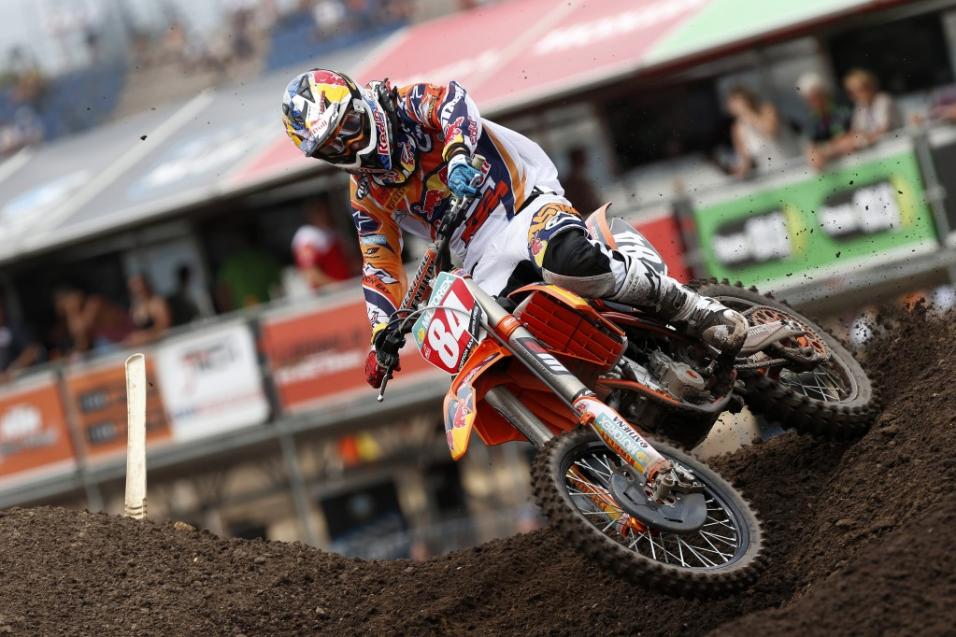 The series of wins, podiums and the never-ending sight of Red Bull KTM as part of MX1 and MX2 podium ceremonies is now reaching a zenith as the 2013 FIM MX World Championship story approaches a definitive word. Tony Cairoli nears his fifth MX1 title in a row with 108 points of daylight over Rockstar Suzuki’s Clement Desalle and just 200 left to win from the four remaining rounds. The Sicilian swapped moto wins and second places with the Belgian in Germany for his fourth victory on the bounce, ninth of the campaign from thirteen and maintains a 100 percent podium appearance streak. In MX2 the horizon is even clearer. Jeffrey Herlings is six days away from a second crown at the age of eighteen. A perfect scorecard so far this season was amplified with his eleventh double moto haul from thirteen. His unchallenged triumph at the Lausitzring gave him the outright record for successive wins and drew him clear of teammate Jordi Tixier – second and on the box for the eighth occasion in 2013 – by 169 points. The relentless punishment for his MX2 peers could finally be over in the Czech Republic.

While the headlines for Grand Prix are becoming increasingly closer to statistical paragraphs for the KTM factory there was no doubting that the venue for this thirteenth fixture from seventeen also came under the microscope. The wide, fast, sandy, immensely bumpy and jumpy course laid out over a motorsport oval in the depths of eastern Germany was the second time motocross had travelled outside the bounds of what one would call a traditional set-up. The track was constructed with over a thousand trucks of dirt and in just seven days. Apparently it will take just two more days to scrape all the terrain off the asphalt and return it to the nearby land from which it was excavated. While the idea of temporary motocross and this kind of setting might be abhorrent to some it was positively received by the paddock who are accustomed to a variety of conditions and settings for the series as it tries to spread its wings from time-honoured but troubled territories. The Eurospeedway was wide, accessible, well organised and housed an artificial but still very capable and tricky racing layout. The difficulty of the meeting was increased with severe temperatures hitting the mid 90s. On Saturday the sun was unbearable and saw riders flooding the tarmac around their campers to quell the heat. On Sunday cloudier skies brought on dreaded humidity and saw numerous racers struggling to go the distance. MX2 podium debutant (long overdue) Glen Coldenhoff could barely stand for his first visit to the box while the factory Honda Motocross team will not be proud that both Max Nagl and Evgeny Bobryshev both had to pull into the pits for a cold bucket of water over their shoulders to be able to see out the second MX1 moto.

The thermometer busting levels made for an uncomfortable viewing experience and must have affected spectator numbers as the overall turnout was pretty disappointing for a German Grand Prix; an event that has felt the full boom of the “Roczen effect” in recent years. There were also other factors. This region of the country has been – and will be – busy with motorcycle sport. Only two weeks ago the nearby Sachsenring circuit entertained MotoGP and in seven weeks the 67th Motocross of Nations will take place around 150 miles away at Teutschenthal. It is entirely possible that a sizeable chuck of the German public (in a region that allegedly suffers with a 35 percent unemployment rate) were saving their cash to see their champions in action in September. In short the Lausitzring was an experiment that worked in every way apart from capturing the imagination of the crowd and in spite of the bizarre “Circus Maximus” pomp directed around Nagl. With Teutschenthal likely to re-fill its role at the home of German MX in 2014 after its part of Nations history it will be curious to see if the Eurospeedway becomes a distant memory or will be back for another shot.

One supporter for the Lausitzring concept and the effective transplantation of motocross was the world champion himself. “I liked the track a lot,” remarked Cairoli. “I’ve said it before and many media or people or fans also think I am crazy or I am talking bullshit but I think this is the way we have to go to improve our sport. We are not racing motocross any more like it was twenty years ago when we’d just put some poles in a field. It is not going like that and we have to push to promote the sport. If big sponsors want to come to the track then they also expect the facilities to be there. Look for the facilities and then the track is easy to build up. I hope we can have more places like this. We need to bring new people to the sport.” 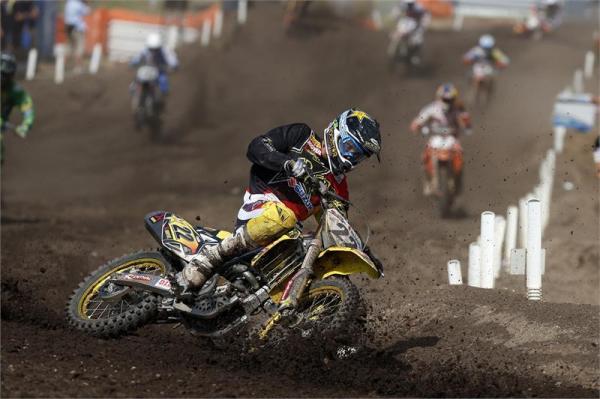 Clement Desalle took a moto win from Cairoli, but it was only good enough for second overall.
Suzuki photo

With Qatar and Lausitzring drawing sparse attendances for a variety of reasons the momentum for road racing facilities does not look too prosperous but Cairoli’s voice is not alone and hardly anyone among the riding fraternity was dwelling on the subject.

“I think it’s mint and I always like coming to these places,” said Tommy Searle. “Qatar was good and Franciacorta (2009 Nations venue in Italy) as well. It depends on the dirt you can bring it to make the track but it was nice here and they did a good job. Tracks like Ernee and Matterley Basin are also sick when they are so busy and have a good atmosphere but this is different and it’s good to have variety.”

CLS Monster Energy Pro Circuit Kawasaki representative Searle had good reason to feel buoyed in Germany. He set the UK’s first pole position in the MX1 class on Saturday (shortly after having dialogue with Desalle in the start gate about their bar-banging in Finland two weeks ago … apparently not much was resolved), rode to a comfy third position in the first moto and just missed out on his first MX1 podium after a front wheel tuck gave Ken De Dycker breathing room in third place in the second moto.

Searle will surely sleep better than his brand-mate Gautier Paulin on Sunday night. The Frenchman was dominating Moto 1 until this big crash saw ‘21’ knocked unconscious and needing a night in hospital for observation. In the aftermath of the accident Desalle rode superbly to beat Cairoli – the KTM man an asthma sufferer and acclimatising to the heat – but the Sicilian upped his game in the second moto. Desalle was the direct beneficiary of Paulin’s misfortune and has moved from third to second in the standings with a 24-point gap over de Dycker. “To take the points today and be second in the championship is good for me and the team but I’m sad for Gautier and it is not nice to see a rider down on the track for a long time,” he said. “I hope he is OK.” 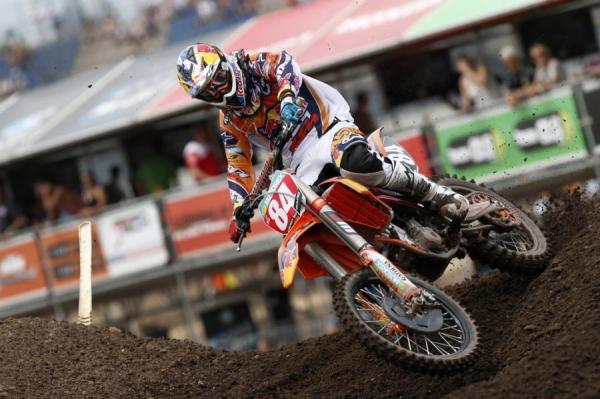 Further down the top ten and David Philippaerts (Gariboldi Honda) and Joel Roelants (Monster Energy Yamaha) posted personal best finishes and that theme continued in MX2 with the likes of Coldenhoff (Standing Construct KTM) – the 125cc GP at Valkenswaard in 2001 might be the last time two Dutch riders were on a GP podium – staggering into the top three and European Champion Mel Pocock (Monster Energy Yamaha) with sixth in the second moto enjoying the same distinctions. Coldenhoff was part of a three-rider brawl for second position that provided some of the best action of the day. Tixier and Rockstar Energy Suzuki Europe’s Max Anstie were the other participants. Better starts had put Anstie’s hat back in the ring as protagonist and after a fourth place earlier on, the young Brit pushed hard for better and a first podium with the factory backed Suzuki. Anstie caught his foot over the finish line table-top while attacking Tixier and the resulting crash ended the exciting dispute deep into the distance. Worthy mention also for Yamaha’s Christophe Charlier who flicked his way to second place in Moto 1 and then somehow leapt up to twelfth from last after a crash on the first lap of the second race with no front brake lever and a seeping radiator that eventually dried and stopped his engine with two laps remaining.

Herlings meanwhile had cleared off and was busy lapping up to eleventh and eighth positions in the two outings. The teenager’s goals are now clear: title number two this coming Sunday and then the focus on the blemish-free season by the beginning of September.

More of a contrast with the Eurospeedway could not be found this week with round fourteen set to take place around the narrow and fast layout of Loket in the west of the Czech Republic; the very definition of old school, so, tight for passing and often stingy with grip. Got to love the diversity. 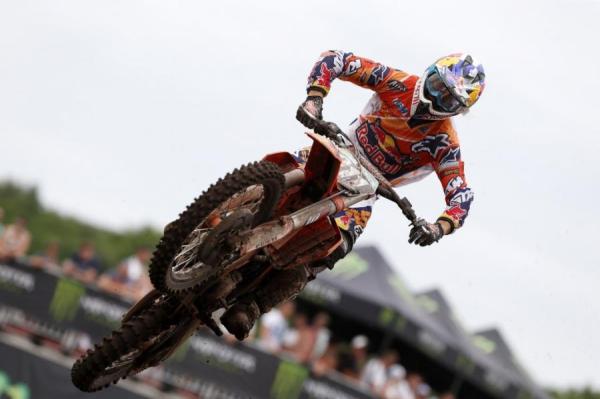