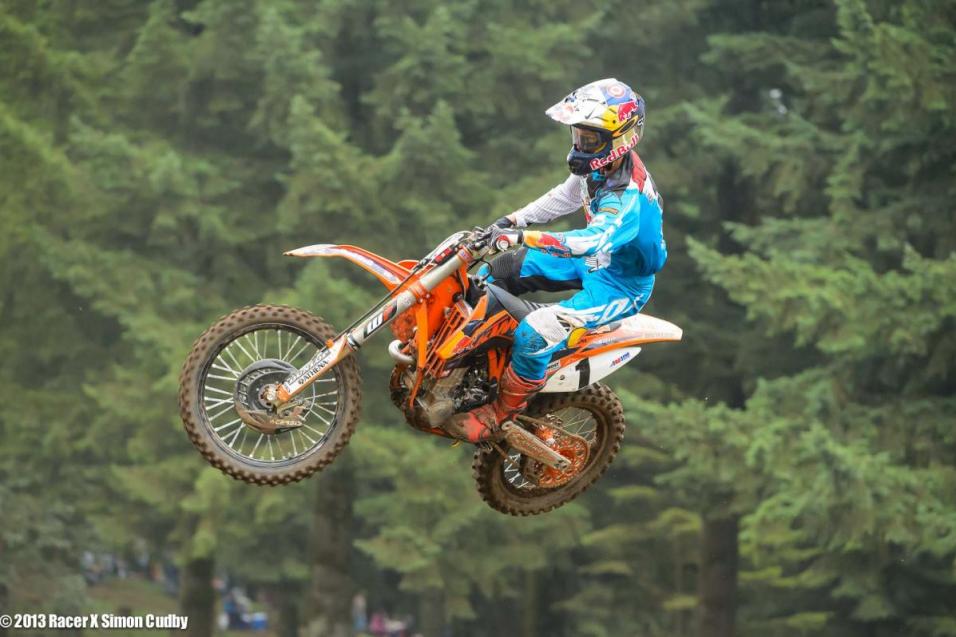 All of the major players started up front in the first 450 moto, with Ryan Dungey leading the way. Points leader and hometown hero Ryan Villopoto started in fifth and would need to pass the likes of James Stewart, Andrew Short and 450 rookie Justin Barcia before he would be able to contend Dungey for the lead.

As of recent, Short has been able to pull good starts and carry the speed to stay up front, but Stewart and Villopoto were able to pass him early on. Though Short dropped from third to fifth rather quickly, he wasn’t shaken and was able to knock out consistently fast lap times to stay in the top five for the majority of the race.

Villopoto started tailing Stewart as the two riders worked at catching up to second place Barcia. They never had to worry about passing him, though, because the Honda Muscle Milk rider tipped over in a right-hand corner and allowed Stewart and Villopoto to advance.

Stewart and Villopoto had to deal with each other while Dungey rode a clear track out front. Villopoto routinely gained and lost time on Stewart over the course of several laps before being able to latch on to the back of the number seven bike. Villopoto made a charge and they drag raced up Horsepower Hill. Stewart had the lead as they crested the hill, but Villopoto had emerged before Stewart as they dropped back down into the infield.

Stewart gradually fell off Villopoto’s pace as Villopoto chipped away at Dungey’s lead. Dungey started running into a significant amount of lapped traffic as time dwindled. Dungey isn’t exactly notorious for being able to slice through lapped traffic with ease, so the lead he once enjoyed began to diminish. Villopoto closed the gap down to a couple seconds with only a few laps left. The pressure was on, but Dungey never lost his cool. Villopoto wasn’t more than two bike lengths away from Dungey in the last few corners, but it was enough to keep him from taking the first moto win. The two Ryans are now set to duke it out in the second moto for the overall win—something Villopoto has been unable to achieve at his home track.