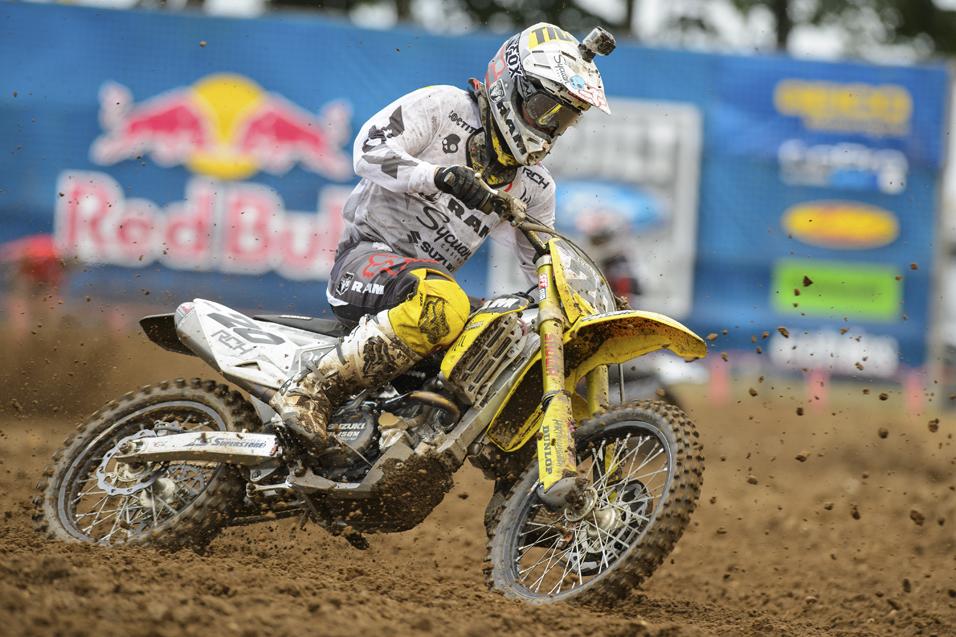 - RedBud was by far the best race of the year for the Joe Gibbs Racing Toyota Yamaha team, with Josh Grant scoring the squad’s first 2013 podium and Justin Brayton matching his National MX season best with a sixth overall. We don’t believe there’s a correlation, but we’re going to note that team owner Coy Gibbs wasn’t in attendance, and then tell him he’s been the one holding the team back all year. Results don’t lie, Coy!

- After the race, Grant was asked if the team will debut the all-new 2014 YZ450F at some point this season, but he said the team has a lot of time invested in the current model and will race the year out on it and debut the ’14 at the Monster Energy Cup. Jeremy Martin confirmed the same for Star racing, saying they will race out 2013 on the current YZ250F.

- RedBud proved to be another tough day for Rockstar Energy Racing’s Ryan Sipes. Sipes stalled his bike on the first lap of the first 450 moto while running inside the top ten. He would finish the moto twelfth. 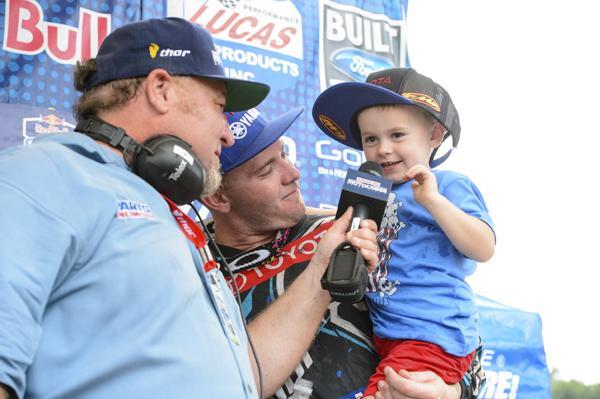 Josh Grant shares a proud moment with his son on the podium at RedBud.
Simon Cudby photo

- Eli Tomac and Wil Hahn have less pressure on their shoulders now that their 450 deals for 2014 are locked in. “It is (a relief),” answered Tomac. “Just moving into the new class is a big enough change, and it’s good to have a team and people I already know to do it. We’ll have a second semi for us, I think it’s going to be a good program.”

- Since his return from a horrific crash at Millville a season ago, Nick Wey has struggled to return to his 2012 form. The home crowd was just what the doctor order, as the Michigan native had his best effort of the season, finishing seventeenth overall.

- Following a tenth in the first moto, N-Fab TiLUBE Yamaha’s Phil Nicoletti’s bike blew up in the second moto. Nicoletti was just happy that it happened on a safe part of the track instead of, say, locking up on the face of one of RedBud’s many big jumps. Next up, some more testing. “I’m bummed I’m going to California but I’m stoked to do some testing,” said the east coast-based Nicoletti to our Steve Matthes. “Hopefully I improve the motor a little bit and make some headway.”

- Justin Barcia and Les Smith, both collected in a first turn crash in the first 450 moto, had incredible runs through the pack. Barcia came back to finish ninth, while Smith would finish the moto fourteenth, after the pair started the moto in 39th and 40th. Barcia’s Honda was totally bent up, too!

- FMF/Orange Brigade KTM’s Joey Savatgy missed RedBud due to a wrist injury suffered at Southwick. KTM hoped he would only have to miss one race, but a statement released yesterday indicates he had to have surgery and will now be out indefinitely. 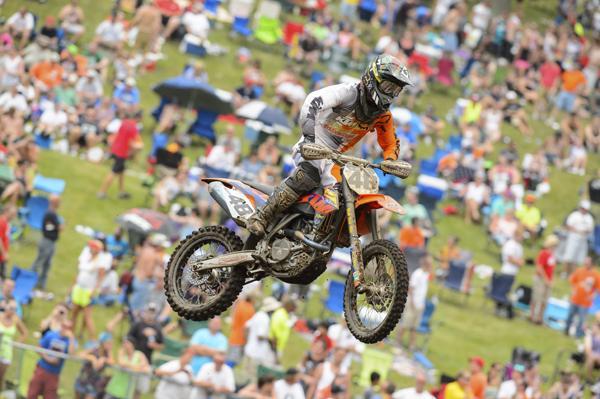 Cole Thompson is headed back to Canada after securing a deal with KTM.
Simon Cudby photo

- Monster Energy Pro Circuit Kawasaki’s 450 effort seems to have a dark cloud hanging overhead. Dean Wilson is out for the summer with a torn labrum, and hopes to get back on a bike just about the time the series concludes in Lake Elsinore—although he doubts he will be ready to race at that point. Tyla Rattray had a podium at High Point, but since then crashed out of Budds Creek, crashed in the first turn of both Southwick motos, and then took on another crash in practice at RedBud, leaving him with sore ribs and out of action for the day. “It’s never easy to make a decision like this, but it was the right choice to make to ensure that I don’t put myself at any additional risk,” said Rattray in a team PR. “RedBud is one of the roughest and toughest tracks we go to and while this was a tough pill to swallow, we’re focused on getting back where we need to be so we can come out strong at Washougal.”

- Although he just signed a deal with KTM to race the remaining rounds of the Canadian Nationals, Cole Thompson decided to race RedBud to get accustomed to the new KTM. The Canada native finished twentieth overall in his last race in the U.S. before heading back home (up north).

- The GOAT of Snocross, Tucker Hibbert, who races Lucas Oil Pro Motocross during the summer, made his 2013 debut at RedBud. The multiple time Snocross champion finished thirty-second overall in his motocross debut. 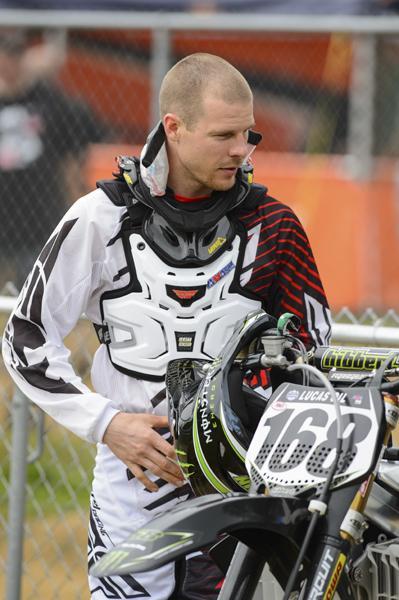 Tucker Hibbert has dumped the snowmobile for the summer and will be racing Lucas Oil Pro Motocross.
Simon Cudby photo

- It was a great weekend for the MyPlash/Star Racing Yamaha squad, as all three riders finished inside the top seven. Jeremy Martin was the, ahem, Star star of the day, collecting his first career moto, and overall, podium. Kyle Cunningham, who’s been overshadowed by his young stablemates, came from outside the top twenty in moto one to finish seventh. He would go onto to finish sixth overall. The team’s other young gun, Cooper Webb, was able to shake his second moto blues, finishing the day seventh overall after a ninth in the second moto. EFI? Who needs it?

- Justin Bogle’s twelfth in the first moto doesn’t stand out on paper, but it was a remarkable run to the front. Bogle went down on the first lap and came from outside the top twenty-five to finish twelfth. “"I got tangled up with some guys in the back, so 12th was about as good as I could do there,” said Bogle in team statement. The GEICO Honda rider finished tenth overall on the day.

- Rockstar Energy Racing’s Jason Anderson was pushing through the pack in the first moto before broken spokes on his front wheel derailed his effort. “I broke a couple spokes on my wheel and I had to pull into the mechanics area and switch wheels. But I was riding good,” Anderson told Racer X. “That kind of screwed me for the second moto; I had a bad gate pick, but I came through the pack and ended up sixth so it was a good day.”

- Anderson’s Rockstar Energy Racing teammate Blake Wharton missed RedBud with a virus, according to the team. The team is uncertain when Wharton will return.

- AG Motorsports’ Kyle Peters had his best effort of the season since his return from injury at Muddy Creek. Peters finished a season-high fourteenth in the first moto. “Just getting my speed back up and we’ll get there. In the first moto I came from last to 14th or something like that,” said Peters. Bike troubles (clutch) lead to an eighteenth in the second moto. 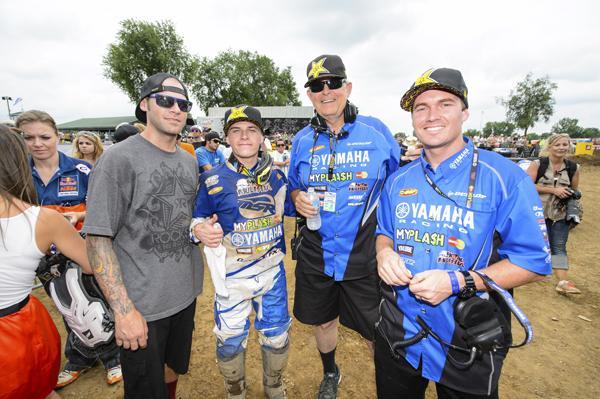 - Hard to argue with the consistency of Ram RCH Suzuki’s Broc Tickle, who has, incredibly, finished either 10th or 11th in eight of the last nine motos (he has a season-best fifth thrown in from Budds Creek). “It was a decent day,” said Tickle in a team press release. “The first moto didn’t go that well. I kind of got pumped up (arm pump) and rode tight. The race didn’t flow too well. I may have just pressed too hard and got tight. The second moto I felt a lot better on the bike,” he said. “I didn’t ride tight and the race flowed well but still got the same result. It’s frustrating but you can’t beat taking 20 points home and being consistent.”

- Australian privateer Jackson Richardson, who is currently 21st in the 250 standings, is heading back to Australia to figure out his VISA problems and begin training for a return to the U.S. next season. Richardson plans on returning in October to prepare for the 2014 Monster Energy Supercross season at the Millsaps Training Facility.

- Dakota Tedder made his 2013 Lucas Oil Pro Motocross debut at RedBud after missing the first six rounds with injury. Tedder finished twenty-third overall in his return to the 250 Class.

- Brady Kiesel continues to shine under the Rock River Yamaha tent. The rookie finished a career-high thirteenth in moto one. He finished seventeenth overall on the day after a bike problem caused a DNF in moto two.

- Privateer Dillan Epstein, who had a big crash in practice at Southwick, missed his second consecutive race. There is currently no timetable on his return. Epstein is twentieth in 250 points through seven rounds.