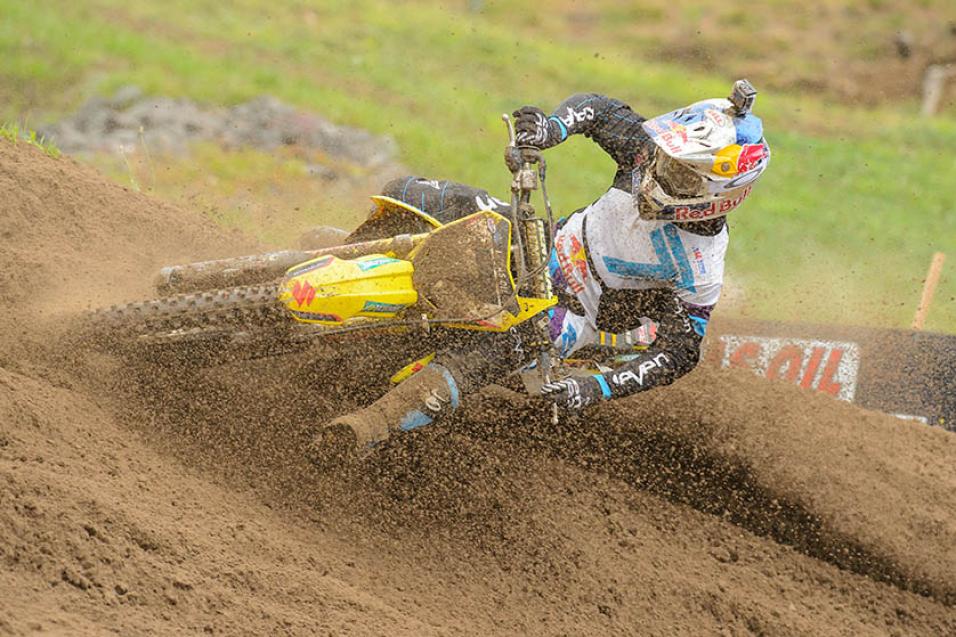 July 2, 2013 11:00am
by: Aaron Hansel
The Wick 338 Southwick, MA Southwick Lucas Oil AMA Pro Motocross Championship
Get with the times with this week's Sign of the Lap Times.

James Stewart had a good run going early (laps two through six were well under two minutes each!) but after leading the first nine laps and setting the moto's fastest lap time in the process, he succumbed to the tricky Southwick sand, handing the lead over to Andrew Short, who put in the second fastest time of the race. A fantastic duel would later take place between Brett Metcalfe, Ryan Dungey and Short.

What's interesting is that Dungey won the race while only logging the eighth-best time of the race! Clearly as the track got rougher and fatigue became a factor, he did the best job of keeping his lap times down. Take a look at the times below to see how Metcalfe and Short responded to the pressure of Dungey. Keep in mind that Dungey passed Metcalfe on lap thirteen and snuck past Short on lap sixteen. 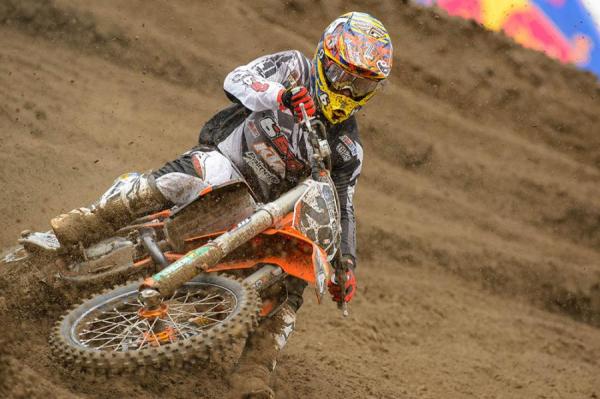 Short finished second in moto one and also logged the second-best lap time of that race.
Cudby Photo

Fantastic stuff from Metcalfe, who hasn't raced in the Lucas Oil Pro Motocross Championship in over a year. Had he held up on the final lap, he may not have dropped two spots to Justin Barcia and Ryan Villopoto, which would have put him on the podium in just his first moto back!

Speaking of Villopoto, the Championship leader was certainly going fast (check out his superb average time), but despite putting in smoking laps the entire moto, including three in a row that were under the two-minute mark, he wasn't able to overcome the deficit incurred by a pair of crashes on the first lap.

Big props to Phil Nicoletti, who seems to have escaped the black cloud of weird/bad luck that seemed to hover directly over his head last season. Setting the fourth-fastest lap time and finishing sixth after running as high as third, it's safe to say that this is one of the best motos of Nicoletti's career. Who wants to bet his National number will be lower than 49 next year? 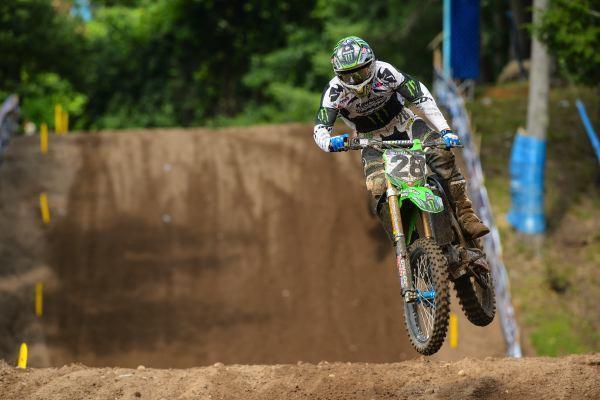 Tyla Rattray was down in the first turn of both motos and fought his way back into the top ten. In traffic, he had the seventh-best time in moto one.
Cudby photo

The chaos and unpredictability of the first moto makes the second 450 moto look orderly, to say the least. The top four guys all finished in the exact same order in which they finished the first lap, with no changes taking place along the way. Behind them, however, Trey Canard and Metcalfe were going at it like a pair of dogs fighting over a juicy steak, with Canard finally taking over fifth place on lap nine. Metcalfe didn't let him off the hook though, keeping Canard in sight and crossing the line less than two seconds behind. Check out the duel in the chart below.

Villopoto came out for the second moto with the same speed and intensity he had in the first, only this time around he didn't get wrapped up in any carnage. Dungey did his best to keep it close, and the two were on fire early on, but Villopoto had the edge, turning thirteen of seventeen recorded (lap one wasn't timed) laps faster than Dungey.

There's no way we can write this withouth giving some mention of John Dowd. The Junkyard Dog came back after a mechanical DNF knocked him out of the first moto to finish nineteenth in his last race. His best lap time in this one was a 2:04.403, with an average time of 2:07.748. That's not too shabby for anyone, especially a guy who's been around for nearly half a century!

What a race for GEICO Honda's Eli Tomac! After not winning a single first moto all year, Tomac came out of the gate hard and led from start to finish. His pace was so fast that despite a small crash, he still managed to set an average time that could stand alone as the sixth-fastest lap of the race and beat second place finisher Blake Baggett by over sixteen seconds. On lap seven, Tomac's fastest, he was nearly five seconds faster than Baggett and almost three seconds faster than Ken Roczen.

Speaking of Roczen and Baggett, a nice little duel for second was starting to shape up between the two of them until Roczen went down on lap thirteen. If you look at their respective lap times in the laps leading up to Roczen's crash, it's hard to say who had the edge at that point, as both riders took turns besting one another's times.

As usual, Southwick produced some local heroes. In the 250 Class, it was none other Jimmy Decotis, fresh off his short-lived European excursion, who made the locals proud. A late-race engine problem ruined his first moto, but before that he ran as high as third and had a fast lap of 2:03.164 with an average time of 2:06.186. Home track or not, that's not too bad for his first outing in Lucas Oil Pro Motocross of the year.

Cole Seely has been quietly improving over the last few races, and it shows in the lap times. He set the sixth-fastest time of the moto and held sixth through lap fourteen, when his times started deteriorating. Seely's strength lies in supercross, but if he can keep his times low in the last few laps he could start busting into the top five this summer.

Superb ride for Justin Bogle, who scored his highest finish of the year in this moto with a fourth. His times never dipped below the 2:00 mark like Tomac and Roczen, but then again, few did. He overcame a lousy start and maintained solid, consistent lap times the whole moto. In fact, laps thirteen, fourteen, fifteen and sixteen were all faster than lap two for Bogle. That's a good sign (of the lap times)!

After Tomac's first-moto romp, betting on him for a second-moto victory at Southwick seemed pretty safe, especially considering how strong he's been in the second motos this year. But somebody forgot to tell Roczen, who coincidentally, has seemed to struggle with closing the deal in in the second motos. However, a good start (and a lousy start for Tomac), solid lap times and perhaps the extra recovery time between motos provided by the WMX race, came together to land The German the win in the second moto at Moto-X 338. Tomac took over second from Osborne on lap eleven (Tomac's fastest of the moto), but in order to catch Roczen he would have had to have consistently logged laps roughly four seconds faster than Roczen, which, as you can see in the times below, didn't happen.

Jason Anderson! Jason Anderson! Jason Anderson! For whatever reason the Rockstar Energy Suzuki racer doesn't get talked about much, but he should be getting mentioned a lot more if he keeps getting results like a fourth place (he was fourth in the first moto last week at Budds as well) and does stuff like setting the fifth-fastest lap of the moto. He was way ahead of fifth place finisher Kyle Cunningham at the end and only trailed Osborne by roughly five seconds when the checkers flew. Check out how close the average times of Anderson and Osborne are! 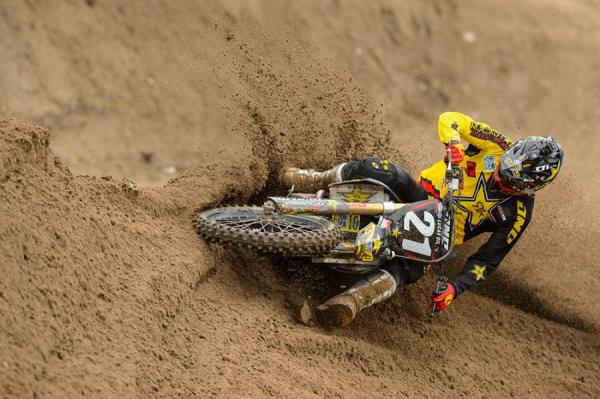 Jason Anderson's connecting flight to Hartford was cancelled, so he drove 13 hours through the night to make the race. He kept going fast when he got there.
Cudby photo

Credit to Alex Martin who scored his best results of the season at Southwick with a 12-11 for tenth overall. You'd think that with all the changes happening around him, such as pitting with Rock River Yamaha after his former team (Eleven10 Mods) shut down, it'd be the opposite. Martin's 2:03.565 was the tenth-fastest lap of the moto, although he's got to be a little bummed that his younger brother Jeremy bested that time by almost a second. Of course, finishing tenth overall to Jeremy's fourteenth (35-6) is what really matters!

Nice bounce back for Kyle Cunningham in the second moto. Cunningham set the seventh-fastest time in moto one but went down and finished thirteenth. He kept it on two wheels in moto two though and took fifth after once again setting the seventh-fastest time. In the past Cunningham has typically been stronger in the second half the series, so if that holds true this season we'll probably be seeing his name here more often.