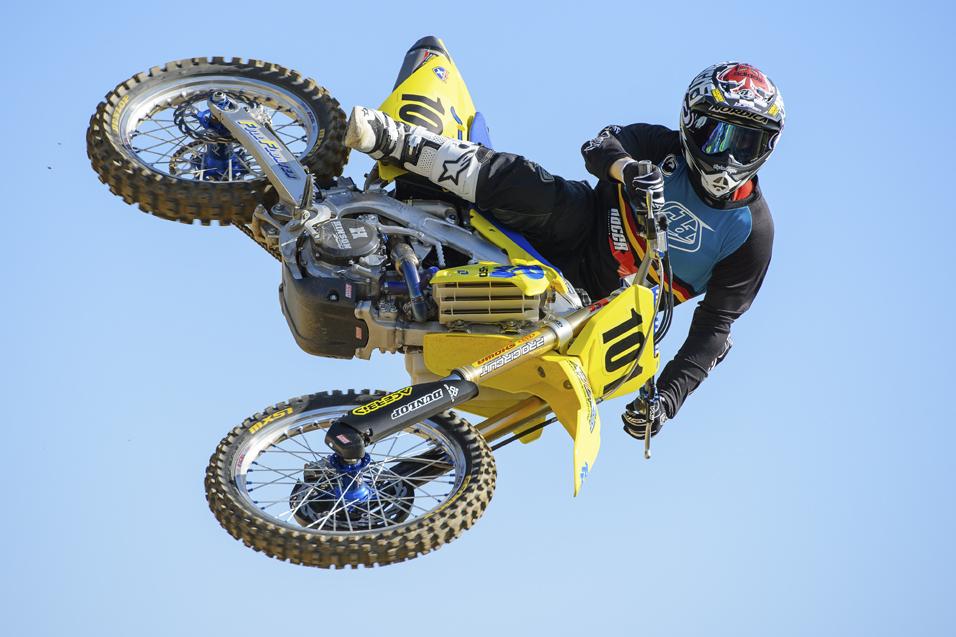 Two questions for you, my man...

How much of this apparent 'depth' in the 450 class do you suppose could be attributed to 4-stroke development? I know 4-strokes have been around a few years now but I think recently we are finally starting to see bikes that are so good that riders can actually utilize the power they are making. The entire field is able to go so much faster than in previous years, too fast I would argue, and the effect is that everyone is going too fast to execute passes. I think this creates the illusion of depth and I can't help but think if we were still on 250 2-strokes, and with the same crop of stars battling, we'd be a seeing straight up pass-fest all moto long.

Also, I've been going to Budds Creek for a long time and pro lap times were always up in the 2min 15sec range for even the very fastest guys. I was a little shocked this year to see the lap times dipping below the 2 minute mark. Is this yet more proof that the bikes are going faster or did they remove part of the track recently?

I love my 4-stroke but I think they might have made pro racing more boring.

There is no question you are right on the money with your first question. The four-stroke movement has definitely made it easier to go faster and eliminated a lot of the mistakes that used to lead to back-and-forth passing in the two-stroke days. You could argue that the increased speeds are making it more difficult to attempt passes and also making crashes more dangerous. After all, higher speeds typically produce more injuries.

I can’t comment on the lap times at Budds because I don’t know what track changes/alterations were made. They attempt to keep the lap times hovering around the two-minute mark but sometimes it goes above or below. Maybe they were hitting the Brian Deegan cheater line where you just cut the entire horseshoe off in the back section? If you want to watch some really good racing hit YouTube and revisit the two-stroke battles of the late 1990’s and early 2000’s.

I'm just wondering why there is always an "internet fanboy battle" between riders from the EU and riders from the USA? Before I got into motocross I was into gaming and you had some fanboys (geeks) who could rage hours about playstation vs xbox. I thought it was ridiculous 8 years ago but the average age from that group was only 15 (or something). Now I'm into motocross and it's exactly the same story, however the average age from the motocross internet group is presumably a lot higher ... Is this the ultimate proof that men don't age mentally? Why does somebody argue for hours for something they haven't accomplished themselves (expect for being born in the land which they are 'protecting')?

I always cut slack to International guys who write in when it comes to grammar. I just appreciate you making the effort… But are you sure that’s how you spell your name?

National pride is mostly to blame here as Budweiser-loving, star spangled banner-waving Americans are going to cheer for a Yank in any International competition. That’s just how we roll. We simple refuse to say we love crepes, if you know what I mean. There is also some animosity over which series is better and which series has the better riders. Ever since we crossed the pond in 1982 and completely kicked the world’s collective ass [sorry, can’t help myself] the sport of motocross has been owned by American riders. That isn’t to disrespect legends like Stefan Everts or Tony Cairoli but if they don’t come test their mettle against the American riders they will meet resistance trying to claim to be true “World Champions.” Don’t let the Internet chatter upset you. I believe that every true motocross fan wants to see the same things you do: Great racing between the best riders in the sport and a handshake between competitors when it’s all over. And by all over I mean when the Americans wipe the floor with the hacks from the rest of the world and I’m so sorry I can’t help myself.

I don't have a question about racing but I read your column every week and I gotta ask how do I get myself started in the motocross scene with the factory race teams? I don't want work a dead-end job and motocross is my life. I will never be a pro so the next best thing would be to be there. All I want do for my life job is work with the pro race teams and be able to go to every race and be there during the week for all the work to be put in. I'm no mechanic but I have a decent amount of racing knowledge. How do I get started and get my foot in the door? I'm moving to southern Cali in the next few months cause that's where you have to be so that part will be done.

Thanks for reading my question

So, you have no mechanical skills, no riding skills and no real contacts in the industry? It’s not looking great for you, Eddie. But I believe that you can make it happen if this is really what you want. Make some phone calls, visit some businesses, get your name out there and start at the bottom. I know guys who manage factory teams who started out sweeping metal shavings off the porting room floor at Pro Circuit. There are guys who started at In-N-Out Burger washing lettuce and they went on to fantastic things… like flipping patties or making the french fries. Dream big, my friend, and some day you could be slicing tomatoes or servicing the shake machine. Except, you know, in the motocross industry, which is like making sandwiches for a guy between motos. I believe in you, man.