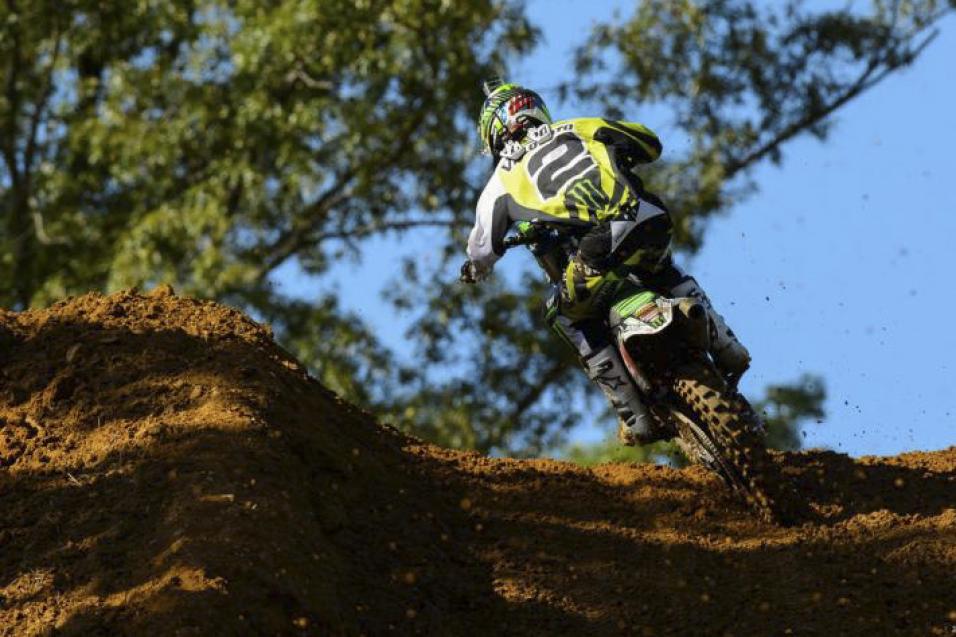 Ryan Villopoto took yet another moto win to extend his points lead in the series, but there were a few shakeups in the field to keep some air in the race. Justin Brayton was able to put his Yamaha up at the front of the pack through the first turn. He wasn’t able to hold the lead for long with holeshot specialist Mike Alessi hot on his tail. Though Brayton lead through the first turn, Alessi secured the MotorcycleSuperstore.com Holeshot by sneaking by Brayton around the inside.

Alessi wasn’t able to hold on to the lead long either. Villopoto took the spot away from him quickly in the first lap. Ryan Dungey wasn’t far behind and worked up to second place rather quickly. The Red Bull KTM rider slowly made up ground on Villopoto in the first half of the race, and was able to close the gap by doubling through the rollers before the finish line while Villopoto bounced off the face of them. The race heated up as the two encountered lapped traffic. However, the battle was cut short when Dungey went down in the same set of rollers he used to his advantage earlier in the race.

Alessi and Ryan Sipes had a close battle for third going for the majority of the race. Both riders were riding well, but the wind in Sipes’ sails died down toward the end of the moto. Justin Barcia was able to make it by the Rockstar Energy Racing rider to secure fourth. Alessi held on to the last podium position, as did Dungey for second. Villopoto won the moto by nearly a full minute.