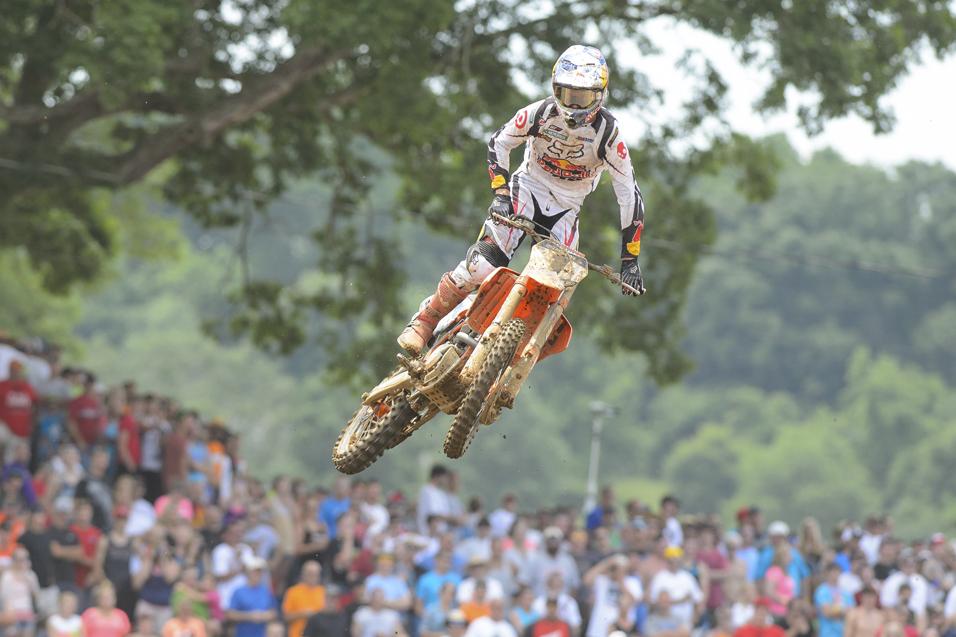 Check out Villopoto's average time. Amazingly, it's good enough to rank as the eighth fastest lap! With that kind of speed and consistency, it's no wonder he won the moto by nearly ten seconds over Justin Barcia.

Ryan Dungey got a bad start and was forced to work through riders for the first several laps. On lap five, his fastest of the moto, he'd moved around James Stewart into third place but surprisingly, wasn't able to take advantage of a clear track to drop his times significantly after that.

Ryan Villopoto and Justin Barcia were pushing each other hard early in the race, especially at the beginning when both were no doubt looking to duck down and disappear for the moto win. As we know now, it was not a pace that Barcia was able to maintain, as evidenced by an average lap time exceeding RV's by just over half a second.

Take a look at the chart below and you'll see that Barcia did a great job of hanging with Villopoto's times, even beating them occasionally. But, while both rider's times went up in the second half of the race, Barcia's went up significantly higher than Villopoto's. Lap ten proved to be the breaking point for Barcia, whose times suddenly increased by over two seconds. Barcia didn't give up, and even came back to set a faster lap than Villopoto on lap thirteen, but all in all, Villopoto put a sound beating on him in the second half of the moto.

Talk about an off-day for James Stewart. While the Yoshimura-Suzuki rider simply hasn't threatened to win a moto this year, it's still surprising to see his fastest time also suffer, as Stewart is known for being able to piece one fast lap like nobody else.

Ryan Dungey picked up where Villopoto left off in the average lap time department by posting a blazing fast average that is good enough to stand alone as the seventh fastest lap.

If Villopoto's lap times formed the model of speed and consistency in the first moto, it was the opposite the second time around. Thanks to a crash on the first lap, Villopoto was forced to deal with traffic until getting into third on lap eleven, only to make a mistake and lose two more spots on lap twelve. The spikes in lap times contributed to an average lap time of nearly a second and a half slower than Dungey's, despite Dungey slowing down on the final lap and posting a 2:10.348.

Bummer of a day for JGR Toyota Yamaha's Josh Grant, whose lap times suggest that was faster than the thirteenth overall he recorded on Saturday. Troubles in the second moto relegated him to thirty-sixth after qualifying fastest and taking seventh in moto one.

If you watched the television broadcast you saw Barcia's mechanic holding out a pitboard that said, "Fight Back" after Dungey took over the lead on lap twelve. But late in the day, he could not. His lap times went from the 2:02's to 2:04's on laps twelve and thirteen before climbing into the 2:07's and 2:08's. Dungey, meanwhile, kept his remaining laps low before slowing up significantly on the final two laps. 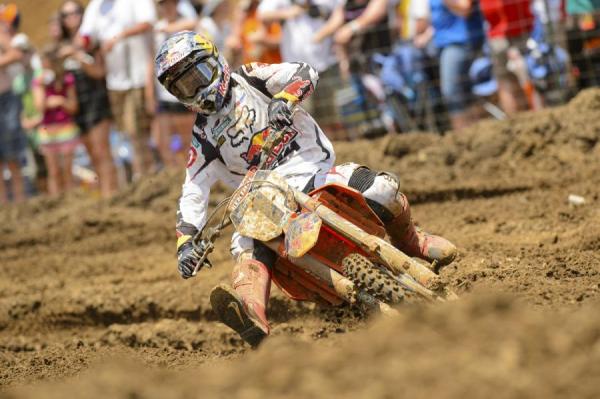 It was Ryan Dungey who set the fastest lap in the second 450 moto.
Simon Cudby photo

Ken Roczen continued his first moto excllence at Muddy Creek by posting a fast lap nearly a whole second faster than second-fastest lap holder Blake Baggett. His impressive average time, fast enough to stand alone as the seventh-fastest lap, carried him to a 6.909-second margin of victory over Marvin Musquin. The German is proving to be very dangerous when left with clear track in front of him. On lap three he dipped into the 2:01 range, a feat nobody else was able to do, and he stayed in that range until lap nine!

MyPlash Metal Mulisha Star Racing Yamaha rookie Cooper Webb did great in Tennessee. While most riders were setting their fastest laps early on in the race, Webb set his on lap eleven. Leading the first lap, he started out in the 2:05's and 2:04's, and steadily lowered those numbers before allowing them to creep back up slighltly on lap fourteen. Coincidentally, Eli Tomac passed Webb on the following lap to take over fourth place.

Just like last week at Thunder Valley, Tomac was on fire in the second moto, leading every single lap and posting the fastest lap of the moto in the process. His first three laps were ridiculous and were all in the 2:00 range, which contributed to an average lap time that's good enough to stand alone as the eighth fastest lap of the whole moto. After posting his fastest time on lap three, Tomac kept his times low, not allowing them to climb into the 2:04 range until lap twelve. The end result was a 17.816 margin of victory over Marvin Musquin.

Speaking of Musquin, the Frenchman used consistency to take his second career overall in Lucas Oil Pro Motocross. Excluding the final two laps, Musquin kept his times low throughout the moto, not experiencing any significant spikes or drops at any point.

Another race, another late moto heartbreak for Roczen, who had the hard-fought overall in hand after crashing early and racing most of the moto with an unbuckled boot. A mistake on lap fifteen handed the win to Musquin, although Baggett, who slowed in the middle of the race, was starting to surge a bit toward the end too. Let's take a look. 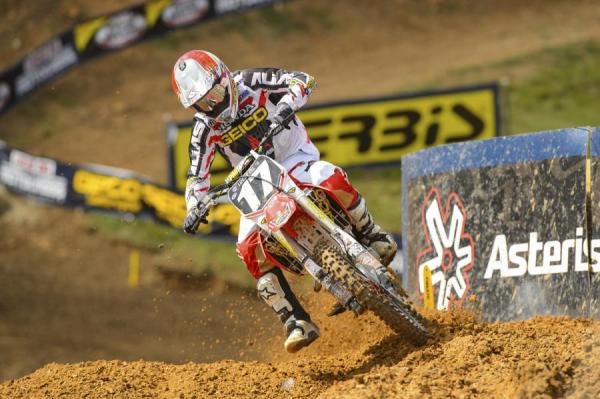 Eli Tomac was on fire in the second moto.
Simon Cudby photo