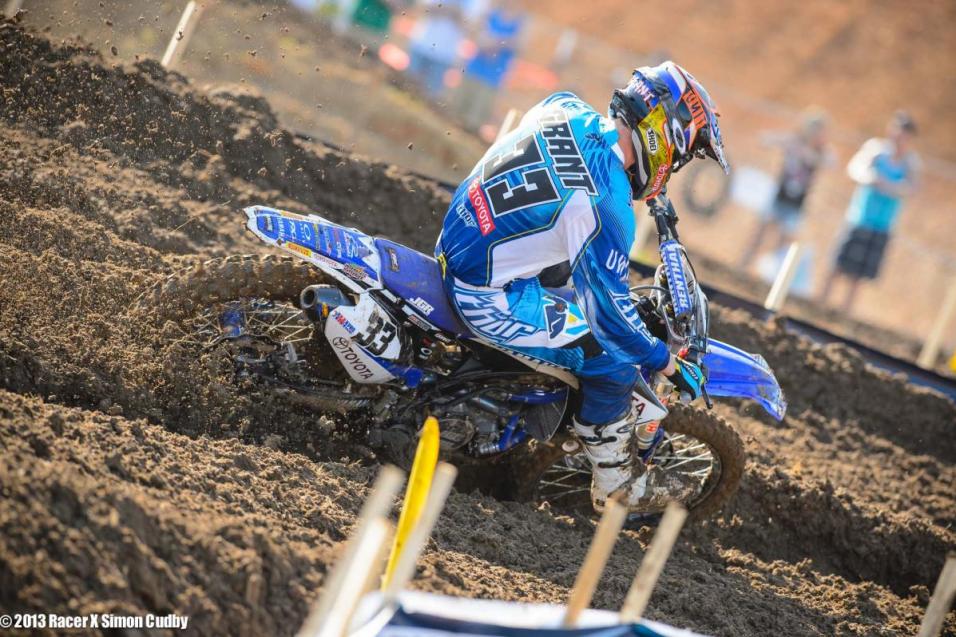 Round 3 of the 2013 Lucas Oil Pro Motocross Championship has embarked on historic Muddy Creek Raceway for the first annual Built Ford Tough Tennessee National. The inaugural visit to the hills of Tennessee marks a return to the Southeast for the series since Gatorback in 1997. Fans from all around have flooded the hillsides, as over 20,000-plus are expected.

Struggles for JGR/Toyota Yamaha in 2013 have been well documented, but the team, and Josh Grant for that matter, was back in a big way in practice at Muddy Creek. Grant, who is back after missing nearly the entire 2013 supercross season, was the fastest in first practice setting a 2:06.360. As tracks conditions began to get harder, lap times began to drop in the second practice. Grant slashed nearly two seconds off his fastest lap, putting in a 2:04.973 in the second practice—which was the fastest 450 overall qualifying time.

The Belgian duo of Clement Desalle and Kevin Strijbos are back for another go on the American circuit—their final race before heading back to Europe. Desalle was second quickest overall with a 2:05.098. Ryan Villopoto, who is a perfect four of four through two rounds was fifth fastest behind Justin Barica and Ryan Dungey. Trey Canard, Ryan Sipes, Tyla Rattray, Broc Tickle and Andrew Short would round out the top 10.

The 250 Class was the Ken Roczen show as the current points leader set a blistering pace in the second timed practice with a 2:01.979—which was the best overall. Eli Tomac dropped a fast lap late in the second practice to take second overall. Defending champion Blake Baggett was third fastest, with local hero Zach Osborne, who grew up 20 minutes away, fourth fastest. Marvin Musquin, Jeremy Martin, Nico Izzi, Jason Anderson, Cooper Webb, and Martin Davalos made up the rest of the tenth fastest qualifiers.

Sam Gammon and crew made some big changes to the track—one of which is a huge triple step-up, in which many 250 guys were doubling. There is also a new section in the back that should offer decent passing spots. The track is tight and does seem a little one lined, but it will be rough, rutted and hot, which should lead to passing opportunities.