Motul Pirelli Suzuki’s Matt Moss claimed victory in the fourth round of the Monster Energy MX Nationals, his first overall since rejoining the MX1 category in 2013.

Moss rode his RM-Z450 to his second straight GoPro Super Pole before winning the opening moto, and clinched the round with a second in moto two.

The result for Moss narrowed the gap to 27 in arrears of series leader Todd Waters (Motorex KTM), who salvaged fifth for the round despite a concussion suffered in a local Queensland race last weekend.

“At the start of the year Jay [Foreman] said to me, let’s just build,” Moss said. “The bike’s great and Jess and I have really gelled. So many people behind the scenes make this possible, so I really need to thank Motul Pirelli Suzuki. 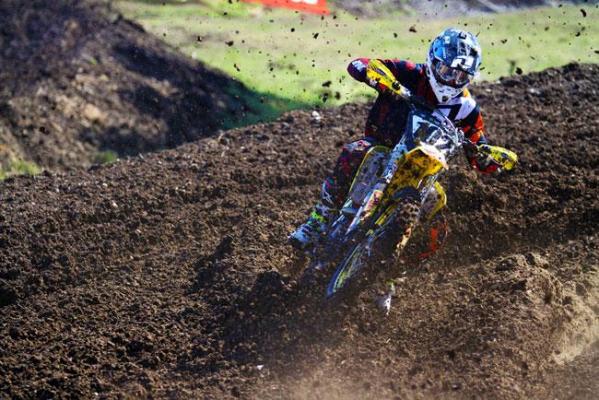 Matt Moss was the overall winner in MX1 at Broadford.
Simon Makker/Makkreative.com photo

“I’m stoked to get the win and to close the points up on Todd. Today was the first fault for him and hopefully there’s many time come [laughs], but he’s a true champion and he’ll bounce back. We’re getting the wins now and we’ll chase after him.”

Winning the second moto was Scotsman Billy Mackenzie (CDR Yamaha), breaking through for his first win of the year in moto two with a dominant victory. Earlier, the former GP rider rode to third in moto one even though he went down during the moto.

Mackenzie’s result boosted him back to third in the series after a disastrous Wonthaggi weekend a fortnight ago, and he’s taken a lot of confidence from the result today.

“There’s a lot of racing left, I know Todd’s got a big lead, but I feel like I’ve got to grips with the bike and the team’s working really hard,” Mackenzie explained.

“Today’s the first day that I actually felt like me, because the first rounds were a real struggle. I feel like I was lucky to even get on the podium at the first two. I obviously had a bad round at Wonthaggi, but we worked hard this week, we’ve been working hard together and it’s nice to get a win – good to see I’ve still got it and the bike was working fantastic. I got my very first GP point back in 2001 on a 125 and I won here in 2011, so I really do like this track. I’m having fun and that’s the main thing.”

Claiming his first career podium was MX1 rookie Kirk Gibbs, maintaining Motorex KTM’s perfect podium run. Gibbs was fourth in moto one and sixth in the second, however it was his four points scored for second in Super Pole that placed him on the podium.

“I’ve just gotta give it up to my family, they’ve been behind me 100 percent,” Gibbs said. “The Motorex KTM team took a big gamble on me this year, I struggled for the first couple of rounds there, but we’re getting over that and moving forward.

“Riding with Todd has been good in Queensland, it’s always good to chase, trying to get faster and faster. My whole team’s been putting in big hours and it’s showing with Todd – hopefully now it’s starting to show with me.”

Jake Moss (Campbell Mining Suzuki), twin brother of Matt, was fourth overall with a consistent 5-3 effort. Moss was again right on pace, but minor errors during the motos forced him to settle for fourth. 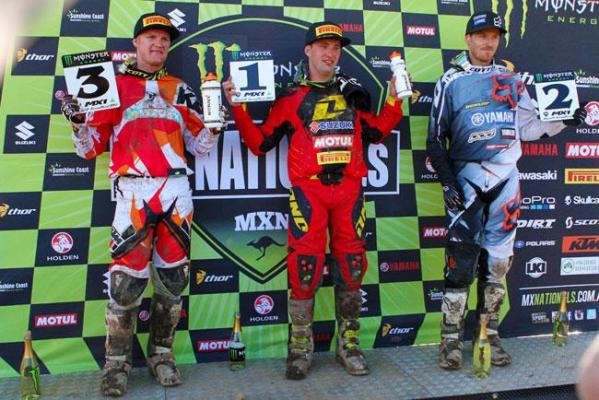 Waters was ultra impressive in moto one with a second after being cleared to compete by Suzuki RACESAFE after qualifying. Moto two was tougher, as he circulated to eighth with the goal of maintaining the red plate.

“I come here to do one thing and that was to keep the red plate,” Waters said. “That last moto was one of the toughest I’ve ever ridden but I have to hand it to the guys on the podium – they rode the wheels off their bikes. I’m looking forward to coming back, putting it back up there with them, so we’ll regroup and go from there.”

Monster Energy Kawasaki’s Adam Monea again featured at the front throughout the motos, winding up with 7-4 finishes in his maiden MX1 campaign to score sixth overall.

Berry Sweet/Lucas Oil Yamaha rider Tye Simmonds had his strongest performance of the season in seventh. He was eighth in moto one, but it was his impressive moto two ride to fifth that turned heads.

Serco Yamaha’s Luke Styke extended his MX2 championship lead to 30 points, winning his third overall round of the season with a 2-1 performance.

Styke stalled in moto one after leading early, but rebounded for an authoritive moto two win. He was happy to chalk more points on the board as the season approaches halfway.

“I was after the win, it was the only option in that last race and I had a point to prove,” Styke reflected. “I can’t thank Serco Yamaha enough, I’m on the best bike in the class. Thank you to everyone who’s supporting me.” 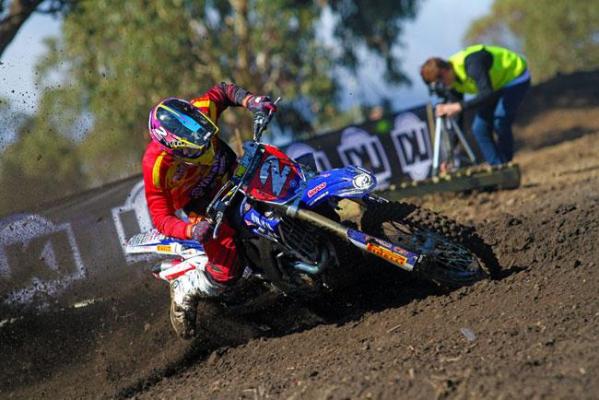 Styke tied on points with Josh Cachia (Carlton Dry Honda), who went 1-2 for the weekend. Cachia recovered from a bad start in moto two, continuing his recent run of form and he’s now climbed to fourth in the standings.

“This track is gnarly, it was one-lined everywhere,” Cachia said. “It was tough, but killer racing. I’m not one to give up, I’ll fight to the end and that’s it. I need to work on my starts – bring on Conondale. I really appreciate Carlton Dry Honda and big thanks to them.”

Another consistent effort from rookie wonder Luke Clout landed him third overall on the second of the Serco Yamahas, posting 6-3 moto results. He’s still second in the standings and will gain strength as the season progresses.

“It was a pretty good round for me, I struggled in the first race we had a bit of a front wheel problem, but I knew I had to get a good start in the second,” Clout commented.

“I settled into third in moto two, it’s a long championship, so I just want to keep the Serco Yamaha consistent and keep it on the box. Anything can happen, but Luke and Josh are riding solid so I will need some luck to get the win. I can’t thank everyone enough.”

Queensland KTM privateer Brock Winston was a determined fourth after charging to 4-5 finishes on his 250 SX two-stroke despite a fall on the final lap of the first moto.

Raceline Pirelli Suzuki’s Ryan Marmont was a season-best fifth with a third in moto one, fending off an inspired late challenge from Winston. He cemented his top five with seventh in moto two.

Highly-touted Queenslander Joel Dinsdale (GYTR Yamaha) picked up his first MXD overall in his young career, sweeping the round and making it three race wins in succession.

Dinsdale was superb out front as he proved the class of the field all day long, now ranked fourth in the standings – 25 points off new leader Hamish Harwood (KTM).

“I just try get in a groove, stay as smooth as I can and get the flow going,” Dinsdale beamed. “It’ll be a good series, I’m looking forward to the next rounds, it’s fun to be up front with the boys instead of stuffing around in the pack, so yeah, it was good!”

Kiwi talent Harwood was ever-consistent to score second overall with 2-2, granted the series lead after rounds one and two winner Jack Simpson (KTM) crashed out of moto one.

Simpson injured his finger in that fall, returned to the pits, then back to the track, but was ruled out of the race by series officials. He was third in moto two, placing him 12th overall for the round and third in the series, 22 points behind Harwood. 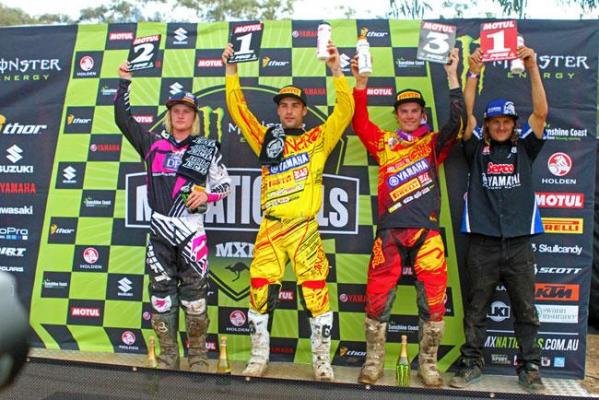 Kawasaki rising star Jesse Dobson completed the podium for the weekend with 3-5 and slotted himself in second for the season, just two points ahead of Simpson.

Corey James (Yamaha) was a fine fourth for the weekend with sixth in moto one and fourth in the second, edging out Tomas Ravenhorst’s (KTM) 5-7 results.