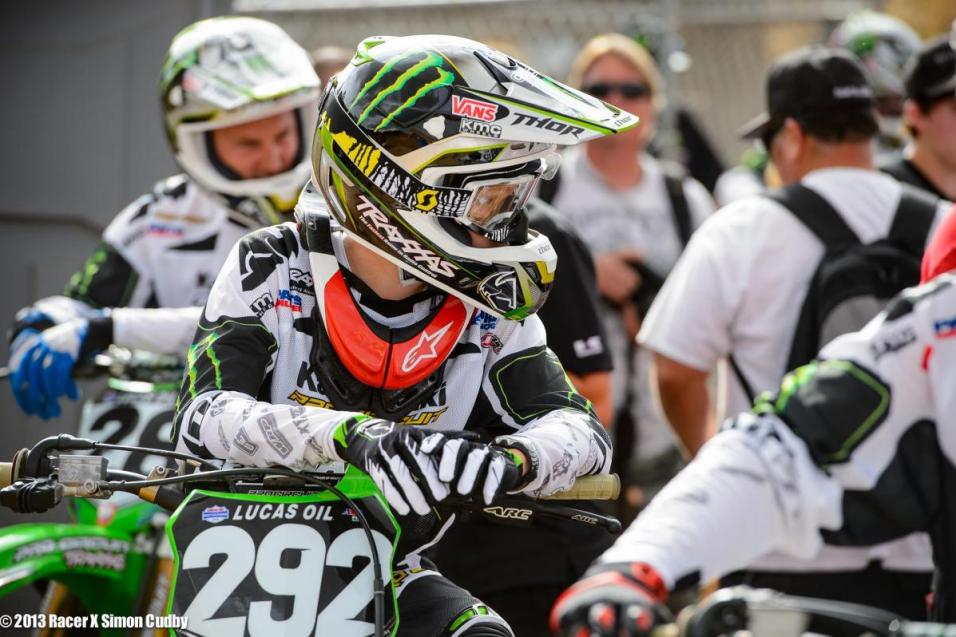 A First
For the first time in their respective careers Ryan Dungey, Ryan Villopoto, James Stewart and Chad Reed will all line the gate at the same time, in the same class on Saturday. They represent the last five years of 450 Class Champions. Two years ago brought us the intense championship battle between Reed, Dungey and RV, while last year Stewart and Dungey chased each other around for the first two rounds—before Stewart suffered a wrist injury at round three. Hangtown will mark the first time Stewart and Villopoto have raced each other ever in a motocross race in the same class. They have competed in the MXoN together for Team USA, but they were not on the same size bike. Hangtown definitely promises some surprises. – Chase Stallo

Wilson Debuts
With headlines revolving around the return of Villopoto, the depth of the 250 Class and Dungey’s chances at a repeat, pushed to the back page has been the 450 debut of 2011 250MX Champion Dean Wilson. The last time we saw Wilson at a National he was laboring to finish moto one at the opener a season ago—eventually retiring and later undergoing shoulder surgery, ending his season. Severe injuries followed in supercross, ending his 2013 250SX season prematurely. Reports have Wilson at 100 percent, but with a loaded field lining the 450 gate at Hangtown, where Wilson fits in the mix is still a question to be answered. – Chase Stallo 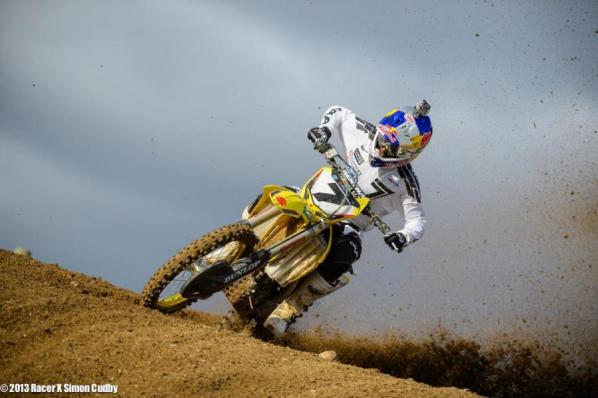 Saturday will mark the first time Stewart (pictured above) RV, Dungey and Reed will all line the gate in the same class outdoors.
Simon Cudby photo

MASH Unit Returns
If you happen to glance at the 250SX East Region results during the season, it was evident that some big stars were missing. But the tide has turned and Hangtown will feature the return of names like Baggett (wrist), Izzi (ACL), Alex Martin (wrist), Bogle (wrist), and Durham (shoulder). How will these big names perform in their first action of 2013? – Chase Stallo

Bam Bam and Ice Trey
Two races. No, that’s not the number of 450 Class races for 450 rookie Justin Barcia—he has four on his resume after moonlighting in the series in 2011—it’s the number of races his teammate Trey Canard has completed in the 450 Class during his career. Following career-threating injuries in 2012, Canard returned to complete a full season in supercross. Now the Oklahoman turns his focus to the outdoors, where the last time he completed an entire season (2010) he won a title. His running mate under the factory Honda rig, Barcia, had a marvelous 450 run in 2011—including a moto win a Southwick. Can a healthy Honda duo make a run at the title? – Chase Stallo

Old Dog, Different Tricks
At the tender age of 35, 2002 125 SX West Region Champion Travis Preston is coming out of retirement. With help from JGR Yamaha, Preston will race the season opener and then hang back up the boots, ala Ryan Hughes a season ago. Preston, who now teaches riding schools, is said to have more knowledge now about proper technique then when he was racing and wants to test it and see if he can be faster now then when he was a pro. In a fitting turn, he even has his old mechanic Shawn Ulikowksi spinning the wrenches again, because Shawn today works as an engine builder at JGR. How will Preston do in his first National since Glen Helen in 2006? – Chase Stallo 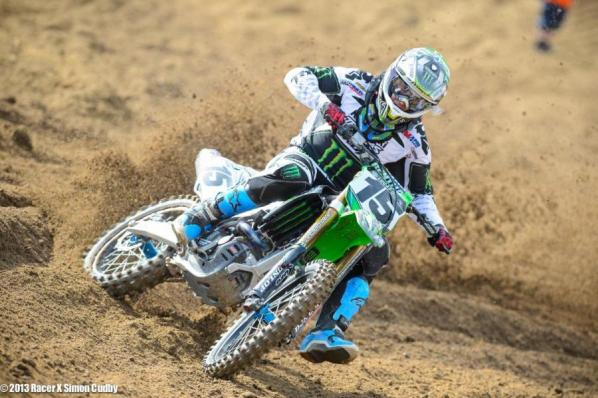 Top Secret
Mike Alessi left Monster Energy Supercross a few rounds early this year in order to prepare for the Nationals and to develop some new form of racing technology. What that secret technology is, however, remains just that, a secret. In talking to Mike yesterday, it appears the secret isn’t a secret—skipping supercross just gave him a head start on typical outdoor suspension and engine testing. In a loaded field, how will last year’s 450 Class runner up do? – Jason Weigandt

Stepping Up and Filling In
We mentioned before that Ryan Villopoto and James Stewart have never raced each other in a motocross race. But here’s another new pairing for JS7: his brother Malcolm! Typically, fill-in riders start making appearances several races into the series, but after the JDR J-Star KTM team closed it's doors (word is the team will continue in 2014 under new ownership), Malcolm Stewart got the call to fill in over at Lucas Oil/TLD Honda for Christian Craig, who is sitting the season out with a broken scaphoid. That’s a new team, bike and class (Stewart will be on a 450) and Malcolm tells us he’ll only have about five days on the bike come Hangtown. How quickly will he gel with his new situation? – Aaron Hansel

Title Defense
After breaking his wrist at the supercross season opener, reigning 250 National Champ Blake Baggett dropped completely out of sight. He'll be back on the gate at Hangtown, but what kind of shape will he be in? Will he have the same late-race fitness that earned him the nickname "El Chupacabra" and saw him steal wins from his competitors in the closing stages of the moto so many times last season? How will the first round of his title defense play out? – Aaron Hansel

Rookie Watch
Highly anticipated rookie debuts can be pretty exciting to watch, and this year Hangtown will host a pair of heavy hitters in MyPlash/Star Racing's Cooper Webb and Monster Energy/Pro Circuit's Adam Cianciarulo. Webb has been busy tearing up the amateur circuit lately. Cianciarulo has been tearing it up with such practice mates as Ryan Villopoto, but now we hear he’s suffering from an illness and may not be 100 percent for Saturday. The bar for rookies at Hangtown is set high; in 2010 Eli Tomac won his first race as a pro there. How will Webb and Cianciarulo stack up? – Aaron Hansel 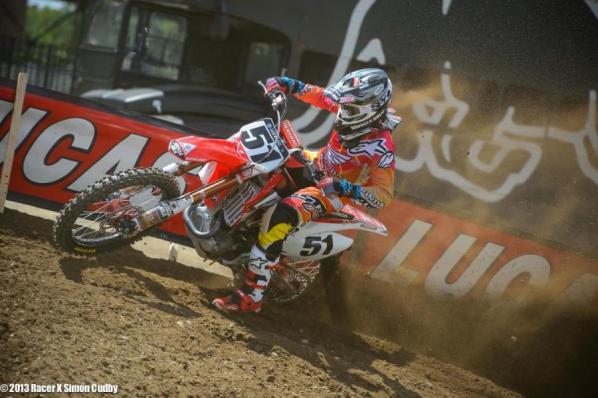 Germany and France
When Germany's Ken Roczen came to America to race last summer, many expected him to pick up where he left off in Europe by winning early and often. Same goes for Frenchman Marvin Musquin, who joined the series in 2011. Things didn't quite work out that way, as Musquin was dealing with a broken hand in both 2011 and 2012, while Germany's Roczen had a harder time than expected adapting to unfamiliar tracks and the American racing format. Neither one was able to break through with any kind of victory until Unadilla last year, where Roczen won a moto and Musquin took the overall. This year, things are different. Musquin is healthy, while Roczen, who just wrapped up the Western Regional 250SX Championship, now has a full year of experience to draw on. How will the former MX2 Champs start their 2013 seasons? – Aaron Hansel

Bonus: Track Prep
Lucas Oil Pro Motocross adds an extra element beyond Monster Energy Supercross, and that’s track prep. Just small changes in watering and maintenance can change things completely. Last year, riders commented that the track seemed dry in practice compared to 2011, which led many to think it wouldn’t get as deep and rough. But it ended up deeper than expected as the motos wore on. The ever-changing track surfaces of motocross are just more x-factor in what promises to be a dynamic season. – Jason Weigandt