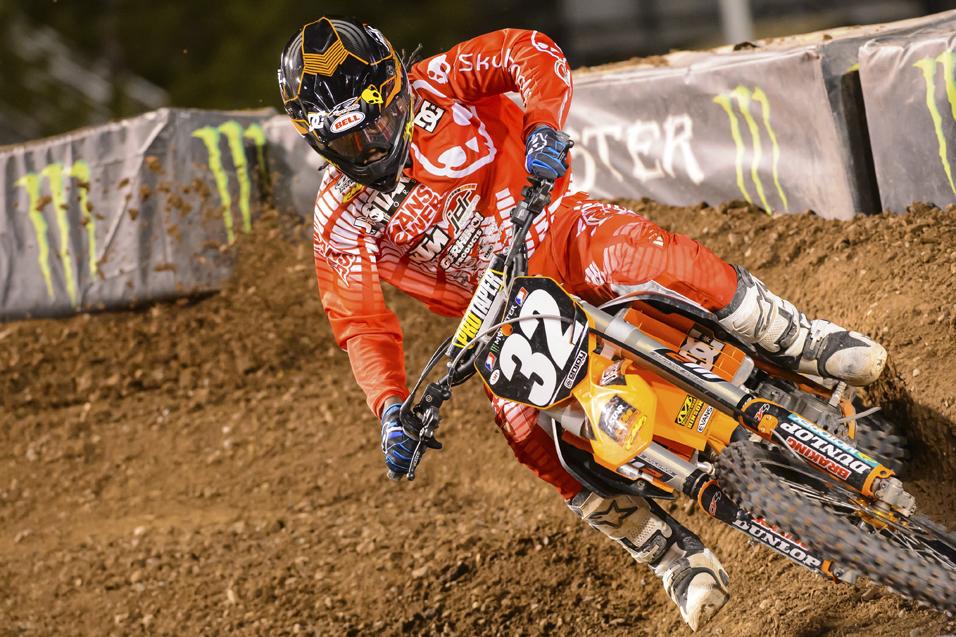 - Dodge/Sycuan RCH Racing’s Josh Hill continued his career resurrection in Salt Lake City. Hill battled with his teammate Broc Tickle and privateer Weston Peick to get into eighth, and then got around Andrew Short late to capture a season high seventh. Hill has two eighths and a seventh in three of the last four races.

- Although he surrendered his position to Hill, Peick still had a good night, finishing a season’s best ninth. Peick now has three top tens in 2013.

- In other privateer news, Rock River Yamaha Ben LaMay’s career year continued in SLC. A year removed from making just one main event all season, LaMay has already made seven main events in 2013, and seized a career-high 12th in Salt Lake City.

- EIGHT: Straight mains made by N-Fab/TiLUBE Yamaha’s 450SX rookie Phil Nicoletti after failing to make the main in the first eight rounds. 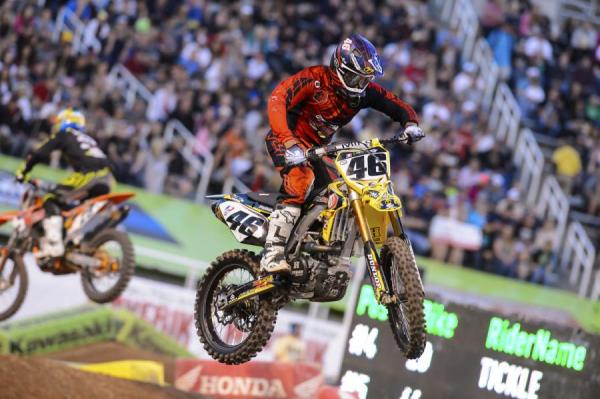 - Lots of rumors about the status of Millsaps’ knee injury, and if it will prevent him from racing the Lucas Oil Pro Motocross Championship. We talked to Rockstar team manager Dave Gowland, and he says they’ll know more about Davi’s status this week, after he gets the knee looked at again. Gowland did say that if Millsaps can’t go for outdoors, the team will have another 450 rider on Davi’s bike, but they’re not sure if they’ll bump up a 250 teammate like Ryan Sipes or grab a replacement, yet.

- Congrats to privateer Adam Enticknap on making his second main of the season in Salt Lake City. Enticknap would finish the night 19th.

- Although his J-Star JDR KTM team is collapsing around him, and his status for the outdoors is in flux, Malcolm Stewart pushed everything aside to have a career night in SLC. Stewart held off eventual main event winner Jason Anderson in his heat race to capture his first career heat race win. In the main, thanks in part to his prowess in the whoops, Stewart matched a career high with fourth. But the JDR team is closing after next weekend’s Vegas SX (there are rumors of a new owner coming in and reviving the team for SX in 2014, but that’s a long way off). So what does Malcolm do outdoors? “Right now, I’m just going to race some selected rounds. I haven’t figured out what brand I’m going to ride. I’m going to race, but it’ll be selected rounds and it won’t be Hangtown,” Stewart told Racer X’s Jordan Roberts after the race in regards to his status for outdoors.

- Meanwhile, it appears the other JDR rider, rookie Joey Savatgy, is still going to race the Lucas Oil Pro Motocross Championships, with support from KTM. That’s all that Joey could tell us at the moment, but we hear from other sources that he may just be pitted by himself out of a KTM Sprinter van.

- Lucas Oil/Troy Lee Honda’s Christian Craig has remained healthy for the first time in his supercross career, and his results have slowly followed. Following a brief three-round slump, Craig bounced back with a hard charging fifth in SLC—which was a career high for the California native. 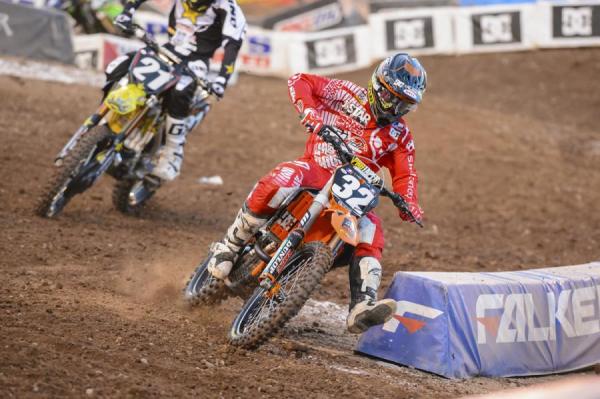 - SEVEN: Number of times Red Bull KTM’s Ken Roczen has finished inside the top two in 2013 before crashes in both his heat and the LCQ led to a DNQ in SLC. But thanks to Eli Tomac’s uncharacteristic sixth place lapse, Roczen still holds a five-point lead heading to the final round in Vegas.

- Monster Energy/Tedder Racing’s Dakota Tedder was back in the main for the first time Anaheim III. It’s been a trying year for the laid back SoCal native, but he is saving his best for last, placing a season high 13th in SLC. Also back in the main for the first time since A3 was rookie privateer Tyler Bereman. Known for his sick whips in the hills alongside freestylers Nate Adams and others, along with his shoots for DC Shoes, Bereman has made a name for himself outside the confines of Monster Energy Supercross. But the kid also has some sick style in the stadiums, qualifying for his second career main in SLC, finishing a career high 16th.

- Cody Gilmore made his first 450SX main event of the season last week in Seattle. In Salt Lake City, he made it again. Three in a row by Vegas? 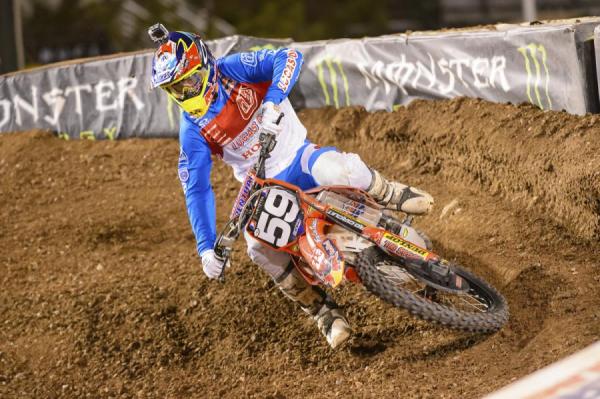 Christian Craig is healthy and making some noise at the end of the season.
Simon Cudby photo

- A shoulder injury knocked JGR Toyota Yamaha’s Josh Grant out of supercross, but he started riding again last week and has begun prep for the Nationals (he’s heading to the JGR facility in North Carolina for testing this week). The California-born Grant has also moved back into his old house in Florida, and will base himself there for part of the summer.

- If you listened to this week’s BTO Sports Racer X Podcast presented by Thor, you heard about the battle for 20th place in 450SX. That spot pays nearly $9000 in prize money, so it’s critical to finish in the top 20 for privateers. Who is in? Nicoletti is 18th with 48 points, Vince Friese is 19th with 45 (but is expected to race a 250 in Vegas), and Chris Blose has 20th with 44 points. Privateers LaMay (39 points) and Jimmy Albertson (38 points) want in, and rumor has it that Albertson may come back from his broken wrist this weekend in Vegas just to give it a shot!