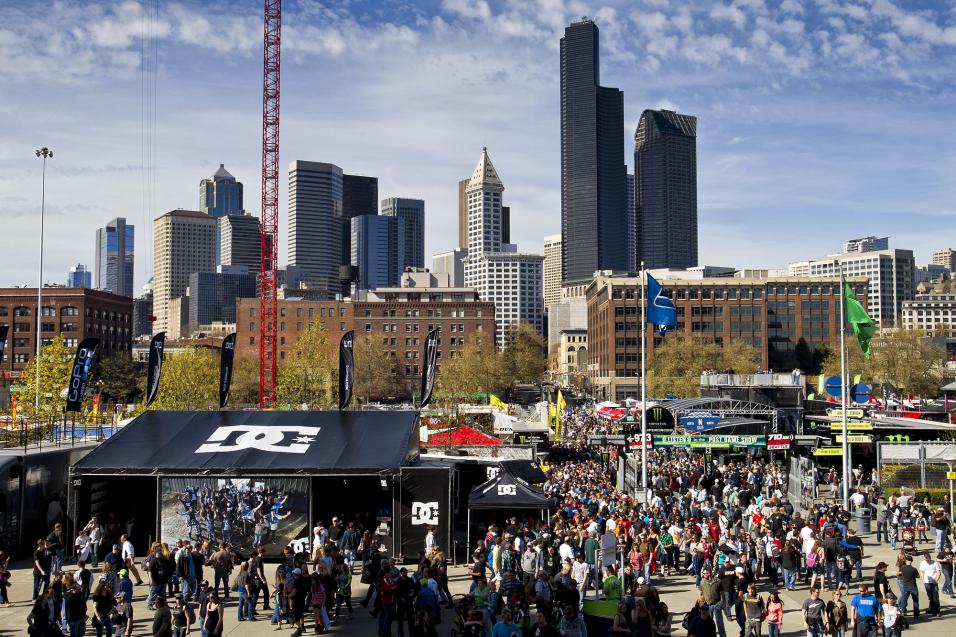 Hello, everyone, and welcome to the Rev Up. As the saying goes, “There’s no place like home.” When Red Bull KTM’s Ryan Dungey spent last weekend hanging out with family, friends and Target executives he had to feel a little extra special something. He sure did race like it, and that was one of the biggest wins of his career. Extra congratulations to Red Bull KTM on their second weekend sweep of the 2013 Monster Energy Supercross Championship, and it’s crazy to think they could possibly sweep all three titles.

With three rounds remaining, the charge moves to CenturyLink Field in beautiful Seattle, Washington and this time it will be two-time defending champion, and current points leader Ryan Villopoto’s home SX. Seattle is the coolest city I have ever been to. On my only trip there it was an unlikely three days of partly sunny skies and mid 60’s. I was able to check out the Fish Market, the Space Needle, and the EMP Museum (Experience Music Project). All of it made the race really special. If you want to plan a “destination” event on the tour as a fan, I recommend this one. The air is cool and crisp and it sets a vibe that you have to feel in person to fully appreciate. It usually rains though, which could make things very interesting.

Dungey’s big win last time out sparked a renewed hype in this season, and with 60 laps of racing to go the championship still hangs in the balance. Seattle arrives with a bitter sweet flavor for Villopoto as the Monster Energy Kawasaki rider won Seattle in his rookie season of 2009, but was struck down with injury here last year. Of course he won the title anyways, but 2013 has been more of challenge and he still has to finish the job. Even with the threat of rain, Villopoto is my pick to avenge his defeat last weekend and taste some hometown victory for himself. It is a slippery slope for him and it will be interesting to see how he reacts in the likely event his rival comes out swinging again. I give Dungey massive props for racing with his balls on the tank last weekend, yet it was a sign of strength to see RV take a loss in benevolent fashion. Villopoto wanted to win and he got beat, but he showed his rival respect. He still has a 22-point lead. Chances are they'll be at it again this time! 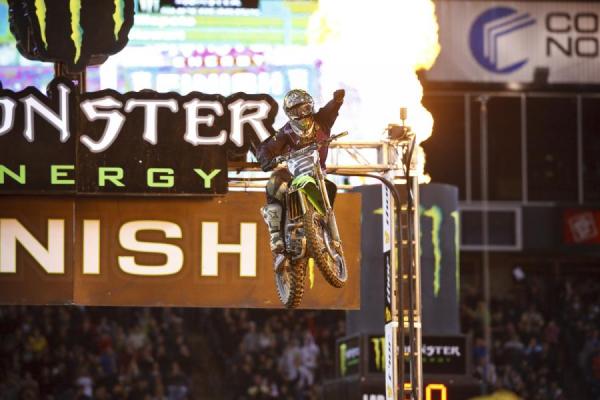 ‪‪At this point I get the chicken skin thinking about how exciting it is to be a fan right now. I love the torture of waiting to see who is going to get the holeshot in the 250 heat races. The West Coast boys are back at, and these cats have been away from the SX races for over two months. Beyond GEICO Honda’s Eli Tomac, and current point leader Red Bull KTM's Ken Roczen, there are a lot of hurt feelings and unfinished business set to fire off with this group. Scope Jason Weigandt’s 250 Words for the full beef.

Seattle has hosted some nostalgic Supercross main events. Notably the two historic wins by native son, Larry “Big Bird” Ward in ‘90 and ‘99 inside the old Kingdome. The 1990 event was a knock down drag out with Jeff "Chicken" Matiasevich, then '99 was a classic because it marked the last SX inside that old dome. It was a fitting end to the era, not unlike Dungey’s Metrodome victory.

Today, the Seattle race is held outdoors, so let’s move to the weather in the Pacific Northwest. It’s going to rain Friday, and hopefully they get the track covered up tight and it will hold off for race day.

Precipitation or not, the dynamic track design will be soft and littered with unpredictable ruts. Anything can happen. Rockstar Energy Racing’s Davi Millsaps landed himself on the podium yet again last week. Don’t expect to see Davi roll over for anyone, not with the title still potentially in reach. Also aiming for huge wins are the Honda Muscle Milk boys and TwoTwo Motorsport's Chad Reed, who is still fighting.

There are a lot of stories heading toward Seattle The media has pumped the orange fenders of KTM, and all of the accolades are deserved. The big four Japanese brands have dominated for a long time now, but now KTM is challenging to win almost every major title in the sport. Foreign and domestic, amateur or professional. Pro teams, satellite teams, off-road, KTM Jr. SX Challenges...they’re everywhere and winning. There is a reason for their success and you’re going to be hearing more about it.

More stories. Besides the supercross homecoming for the champ, Dodge/Sycuan RCH Suzuki’s Josh Hill is a native, too. Hill has given everyone a reason to cheer for him and hopefully luck stays on his side. To that end, racing in front of your hometown fans is like nothing else. My pro career was shorter than a midget on its knees, but I won a heat race at the Topeka, Kansas, Arenacross one time. It was 45 miles from my parent’s house and when you realize the all of the noise is for you it is really special. With the echos of Minneapolis (wow, it was loud) just beginning to fade, it’s time for another cacophony.

Three rounds to go. We’re another week devoid of live television, but we cover our sport so well that you’re virtually behind the handlebars via twitter and all of the other goodies www.racerxonline.com delivers. Things are going to happen fast for the next three weeks, and the pressure is on. Will Villopoto make it happen in front of his home fans? Can Dungey win again and close the point gap, or will something crazy happen? I'm hoping for the latter. I’ll let a Seattle native take it from here.

"You have to go on and be crazy. Craziness is like heaven."
- Jimi Hendrix