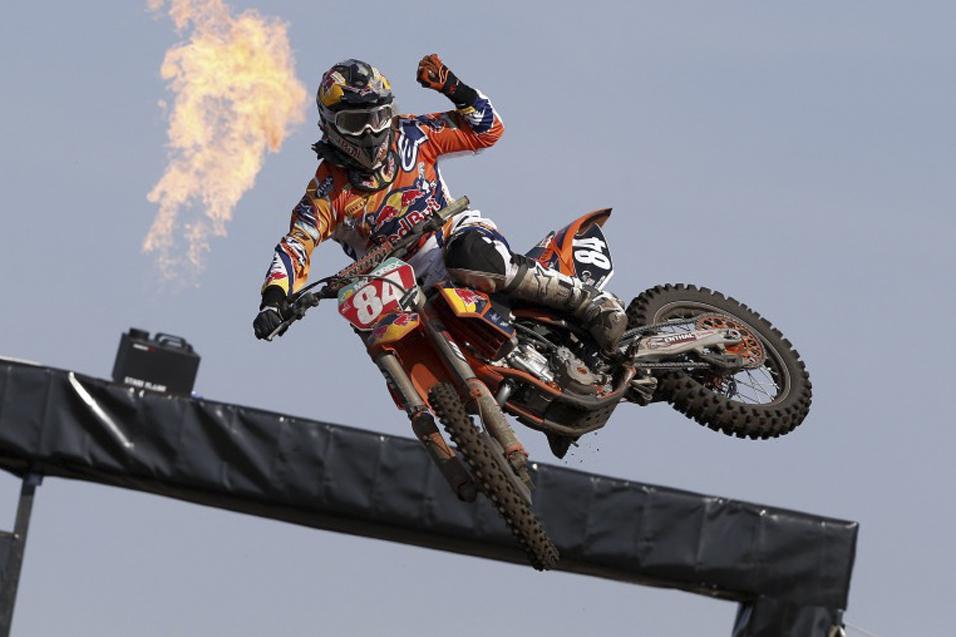 Advertisement | Advertise with Us
A certain word started to be thrown around in Valkenswaard, perfection. The third FIM Motocross Grand Prix of the season was another “orange letter” day for Red Bull KTM’s Tony Cairoli and Jeffrey Herlings, and KTM as a brand took five out of six podium positions across the two classes.

First up, Cairoli. The 27-year-old Sicilian’s 56th career victory was forged from a 1-2 scorecard and completed a four-year of spell of MX1 success on this particular Dutch sand. His defeat of reborn teammate Ken de Dycker in the first moto (after the Belgian had fallen while leading) and valiant chase to almost beat him in the second race (just missing out by 1.5 seconds, and saying he couldn’t have pushed any earlier due to some arm-pump) extended his win rate to two out of three in 2013.

Make no mistake, Cairoli is a rider who is completely on top of his game and has been unstoppable for almost three seasons now. Someone needs to get ‘222’ to a U.S. National, even though the Sicilian has publicly commented that he has little desire to race in the U.S. much in the same way RV, Dungey Stewart and company feel about competition in Europe. It seems the Motocross of Nations will have to remain as the unique melting pot for international face-offs. 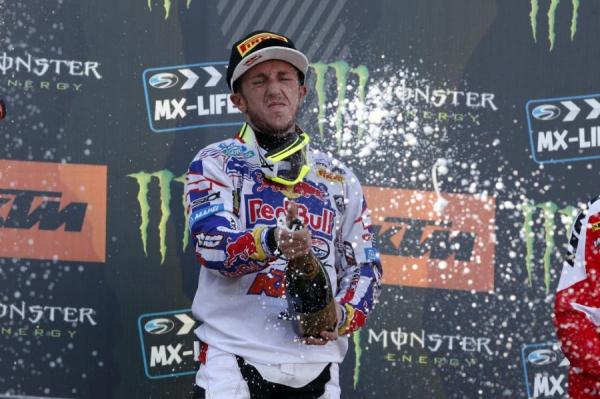 De Dycker deserves plaudits for turning around a career that was heading for a slide just twelve months ago. Awkward and powerful on the bike, “Big Ken” still has something to offer the series. The veterans still have some fight, and this was alluded to by another veteran after the race, David Philippaerts, himself battling back from almost two years of wrist injury (he was victim of a fried clutch on his Honda in the second moto).

Rounding off the MX1 podium was factory Honda powerhouse Evgeny Bobryshev; one of the most popular riders in the paddock for his modest, humorous, and generous character. After the second moto, the Russian even donated his 500 euro holeshot award to a long-serving Youthstream employee who had lost everything in a house fire several weeks before.

Bobryshev turned heads at Valkenswaard in 2010 as an MX1 rookie with a fourth position. Last year, in his second season as a works HRC man, he turned his thumb, and virtually wrecked 2012 before it had begun. Easter Monday was a return to the good days for the new father who celebrated the Italian-based team’s first podium in over a year.

Rockstar Suzuki’s Clement Desalle suffered a first corner crash that gave him the jitters for the second start after lunch. Valkenswaard had returned to its original trajectory, including parts of the layout that had existed well before the reverse in 2007. The snaking opening turns were fast and narrow and amazingly there were not more tangles, especially in the forty-full MX2 gate (MX1 was still looking a little sparse with just 27 finishers.) Desalle took a headplant, and overall had a lack of feel with the terrain that was locked down and less sandy due to artic temperatures through Easter weekend. The Qatar GP winner now has some work to do to catch Cairoli in points. Desalle’s Suzuki teammate Kevin Strijbos opted for a suspension revamp between motos and it helped another one of the category’s veterans to a top three result in the second sprint. 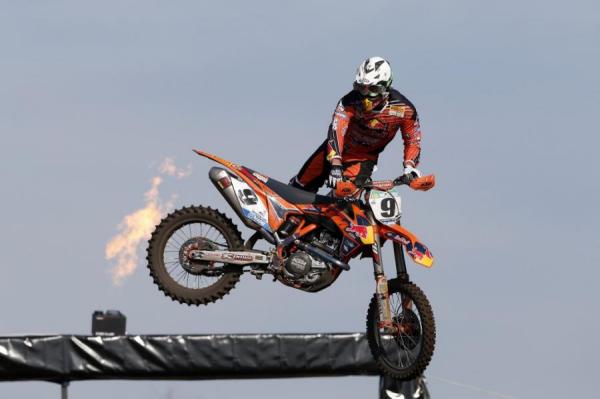 The lack of “give” and technical demand in the sand threw the game plans of Kawasaki duo Gautier Paulin and Tommy Searle somewhat while the likes of Route 77 MVR-D’s Tanel Leok (fourth in moto one) and Max Nagl (fifth overall on the works Honda) were able to gain valuable confidence.

Now, onto Herlings. Wow. Nineteen career GP wins by the age of 18, four in a row at Valkenswaard (the first coming in just his third GP at 15), eight motos unbeaten at the Eurocircuit. Add in the fact that he’s undefeated so far in 2013, a perfect 150 point score in the championship and a ruthlessness on the track with rivals that means talk of a clean sweep this season are now not looking so absurd. “I’m always looking for records,” he said. “I want that second championship and I want to go undefeated. It will be almost impossible and maybe there is a one percent chance, but hey I will go for that one percent. Obviously winning here four years in a row is amazing and to have a lead of a whole GP after three rounds, well, the season could not have started better.”

The last time the 84 was in the sand he lapped almost the entire field at Lierop in September. On this occasion he gave himself the handicap of the fortieth and last gate after outside assistance from a crash in the qualification heat on Sunday earned a disqualification. His second moto comeback after a wretched start from that slot ranks as one of his best yet as he gobbled a 15 second deficit at the rate of a second a lap to reach excellent teammate Jordi Tixier and pass the French teenager with barely minutes on the clock. Moto one had been wrapped-up after overtaking Max Anstie and with a considered move on Tixier. The second race chase of Tixier (and the resulting win, of course) is what the Dutch crowd had turned up expecting to see. 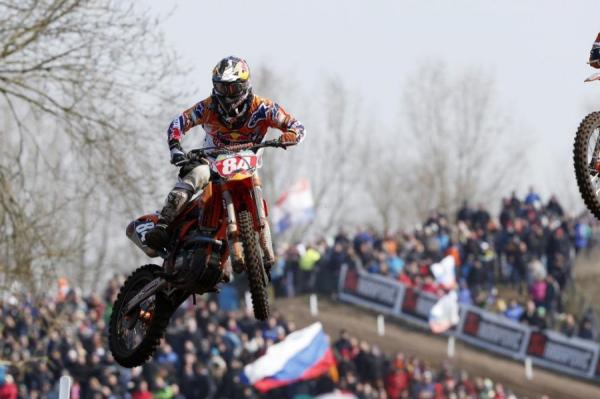 Not even the 40th gate pick could slow Herlings in Valkenswaard.
Ray Archer / KTMImages photo

Perhaps Tixier is feeling the heat in the coveted second factory KTM saddle after a crash-tastic opening to the season. His speed in Holland would have made him an easy victor if his friend and awning-buddy hadn’t had been around. The third KTM on the box was placed there by Britain’s Jake Nicholls, a GP stalwart and slow-burner since 2007 and whose frequency in fourth position during 2012 meant he was long overdue some champagne. Anstie was denied a podium with a mediocre start in the second moto and a lack of refinement in his set-up that meant he couldn’t push that extra bit harder. Romain Febvre’s first corner spill in the first moto meant that any hope of three rostrum appearances in a row for 2013 became remote. Dean Ferris’ weak collarbone was not enough for the frozen sand in practice, but much to his relief, the fiery Australian now has another two weeks to recover before the Grand Prix of Italy at Arco di Trento. Ferris was the first of two despondent pieces of news for Monster Energy Yamaha as Steven Frossard was whisked away for an operation to insert a pin into a fractured metacarpal in his left foot (sustained after being inexplicably hit by rider while training a few days before Valkenswaard) in the hope he can heal sufficiently for round four.

Rounding off the theme of superiority in the Dutch cold was Kiara Fontanesi, admirably opening her FIM Women’s World Championship title defence with a 1-1 over bright newcomer Meghan Rutledge from Australia and the Italian’s principal rival for the seven rounds in 2013, HM Plant KTM UK’s Natalie Kane. 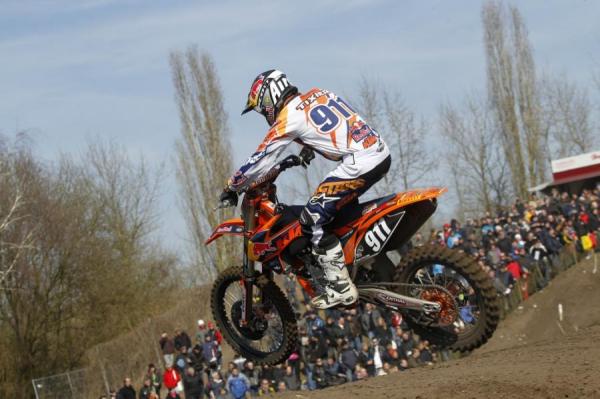