WASHINGTON, Ga. - Only five days after going to battle in the sandy woods of Southern Florida, Factory FMF/KTM teammates Kailub Russell and Charlie Mullins put in yet another three-hour duel at Sunday's Maxxis General GNCC. This time, it was Russell who grabbed the win over Mullins by less than two seconds at Round 2 of the 2013 AMSOIL Grand National Cross Country Series.

AmPro Yamaha's Paul Whibley got off to a great start, grabbing the All Balls Racing XC1 Holeshot Award. Meanwhile, Russell got caught in a first corner crash and began the race in the back of the pack. Whibley led Mullins, Russell and the rest of the field into the woods but the remainder of the day didn't go quite as planned for the 2012 champ. 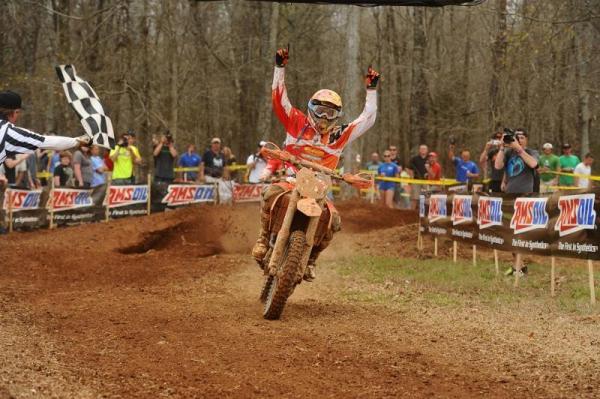 Rocky Mountain ATV/MC's Josh Strang got a mid-pack start, immediately engaging in a three way battle with Shenandoah Honda/USWE-Sports.com's Thad DuVall and KR4 Arrive-N-Ride/B.R.E/Carolina KTM's Chris Bach early in the race. It didn't take long for DuVall to set his sights on the lead pack as he made his way around Strang to take over the third place spot on Lap 2. From there, DuVall made a charge for Russell and Mullins - getting as close as one second behind the KTM duo.

Bach and Strang battled all afternoon, flip-flopping the fourth place position throughout the 3-hour race. Bach eventually made a push past Strang as the 2-Lap card fell, but the former GNCC champ Strang reclaimed the fourth place spot on the final lap.

Russell stopped in the pits for a drink of water on Lap 5 and that's when DuVall made his move for the lead. However, halfway into the very same lap DuVall stalled his bike and Russell moved back into the lead position. Russell and Mullins then broke away from DuVall on the final lap. 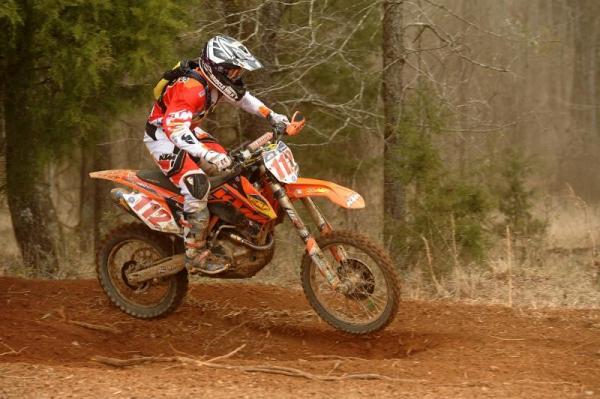 Mullins is now tied with his teammate for the XC1 points lead.
Photo: Ken Hill / GNCC

"I was riding really good out there and was able to get past a few guys at the end but I had some goggle problems on the last lap and got some dirt in my eyes, which slowed me down a bit," DuVall said. "I learned a lot from both of these guys today [Russell and Mullins]."

The final lap of racing was all about the lead battle as Russell and Mullins were neck-and-neck on Lap 7, coming through the finish line less than two seconds apart.

"I took a bad line through the mud hole on the last lap and that's where Kailub passed me for the lead," Mullins said. "Unfortunately I came up a little bit short but I'll take a second any day." 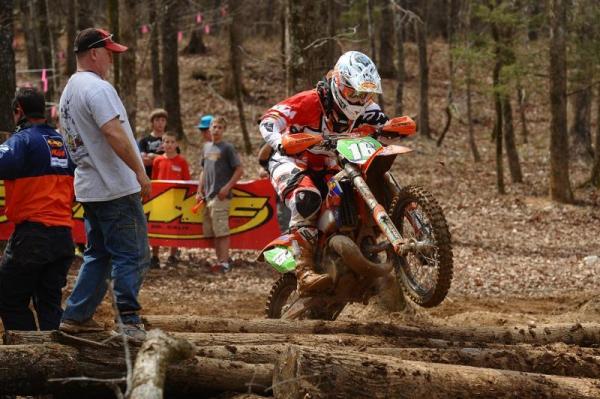 "I'm really happy with the win and every point counts," Russell commented. "I didn't feel like I was the fastest one out there today but if I wouldn't have won, Charlie would have walked away with a ten point lead and I'm happy that we're tied up."

In just his first year of XC2 Pro Lites competition, 15-year-old Grant Baylor grabbed his first-ever Pro Lites podium finish - a feat that has only been accomplished by his older brother and former XC2 champ Steward Baylor Jr. The afternoon began on point for Baylor as he grabbed the DigitalOffroad.com XC2 Holeshot Award ahead of a full class of 33 XC2 racers. F.A.R Husqvarna's Andrew DeLong got off to a back-of-the-pack start but eventually made his way to the front where he and Baylor battled all afternoon. 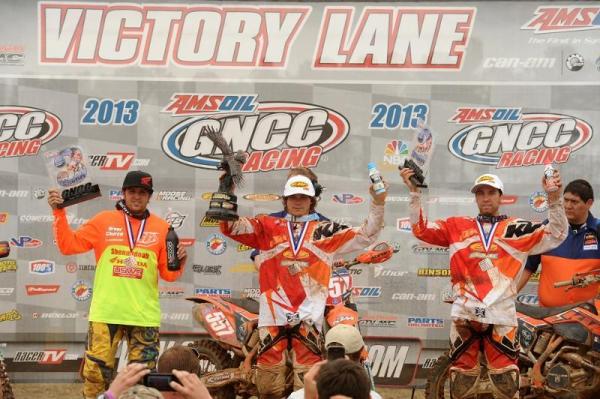 DirtWise Schools/KTM-Parts.com/Maxxis rider Jason Thomas got off to a mid-pack start and quickly worked his way into podium contention. However, Thomas experienced a hard crash while battling with Obermeyer Yamaha/Raines Riding University/Offroadviking.com's Jed Haines that left the reigning XC2 champ a little shaken up. Thomas managed to finish fifth place behind Shane Hufford Jr., who finished a season-best fourth in the class.

Motocross superstar Zach Osborne grabbed his second consecutive podium finish as a mere visitor of the GNCC Series before he heads back to his normal West Coast Supercross duties. Osborne battled with Thomas throughout the day, eventually sealing in the third place finish.

DeLong leads Grant Baylor by nine points in the XC2 Pro Lites division heading into Round 3 in North Carolina. "I'm just pumped to start the 2013 season off with two consecutive wins and put myself into a good position in the point standings," said DeLong. 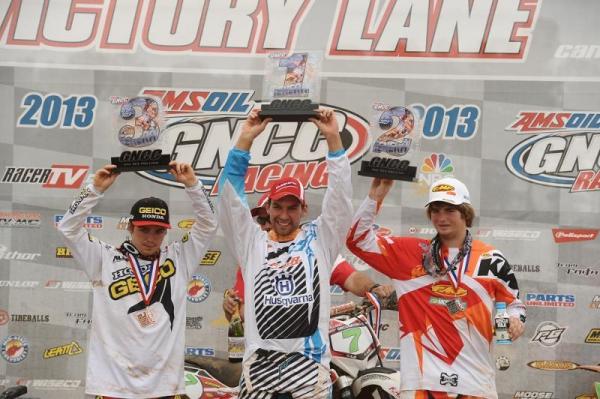 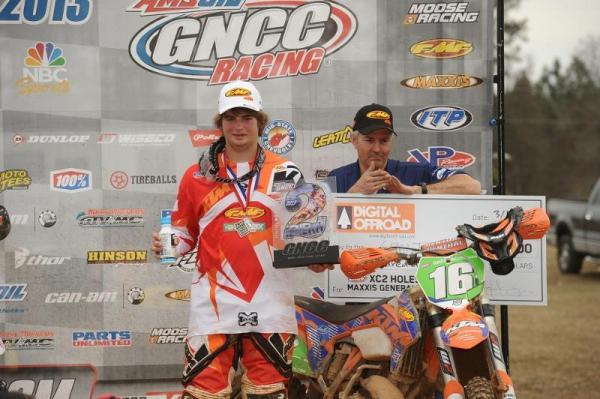 The AMSOIL Grand National Cross Country series is America's premier off-road racing series. Founded in 1975, the 13-round championship is produced exclusively by Racer Productions. Cross-country racing is one of the most physically demanding sports in the world. The grueling three-hour GNCC races lead as many as 1,500 riders through tracks ranging in length from eight to 12 miles. With varied terrain, including hills, woods, mud, dirt, rocks and motocross sections, GNCC events are tests of both survival and speed. The series draws talent from all over the U.S., Europe, Japan, Australia and New Zealand. GNCC Racing is televised weekly on NBC Sports and RacerTVonline.com. For more information, please visit www.gnccracing.com.