Kiwi internationals Cody Cooper and Scotty Columb have consolidated their rankings as the New Zealand Motocross Championships reached the halfway point in the Thames Valley on Sunday.

Mount Maunganui’s Cooper (Moto City Suzuki) and Queenstown’s Columb (JCR Yamaha Racing) are now further in front in the MX1 and MX2 classes, respectively, after the second of four rounds in this season’s Backflips Clothing-sponsored series at Patetonga, near Morrinsville, on Sunday.

MX1 class defending champion Ben Townley (Honda), of Tauranga, crashed to the sidelines at round one of the series at Timaru a fortnight earlier and he was at the Patetonga race track as a spectator only on Sunday. 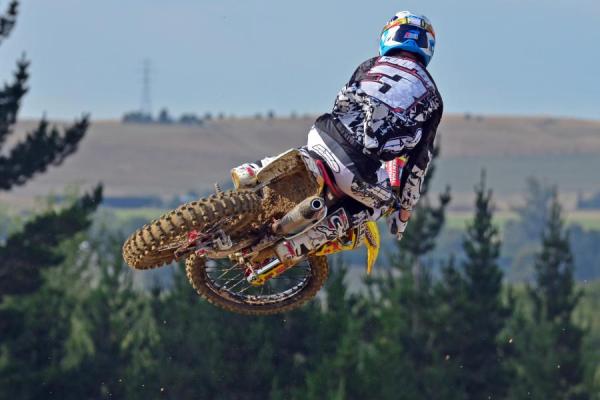 Meanwhile, in the other championship division, the 125cc class, a change at the top was always expected.

Round one winner Courtney Duncan (Yamaha) was absent on Sunday as overseas duty beckoned to her, leaving the way clear for Rotorua’s Cameron Vaughan (JCR Yamaha Racing) to dominate.

The 16-year-old Vaughan was second overall in the class after round one at Timaru a fortnight earlier – with an unlucky crash in one race there followed by two impressive wins – and this hinted that he truly is champion material.

And so it proved as Vaughan secured 1-1-2 results on Sunday, enough to edge out Bayride BikesportNZ.com Yamaha rider Logan Blackburn, of Te Puke.

The series now heads to Pukekohe on March 10 and it finally wraps up in Taupo on March 31.