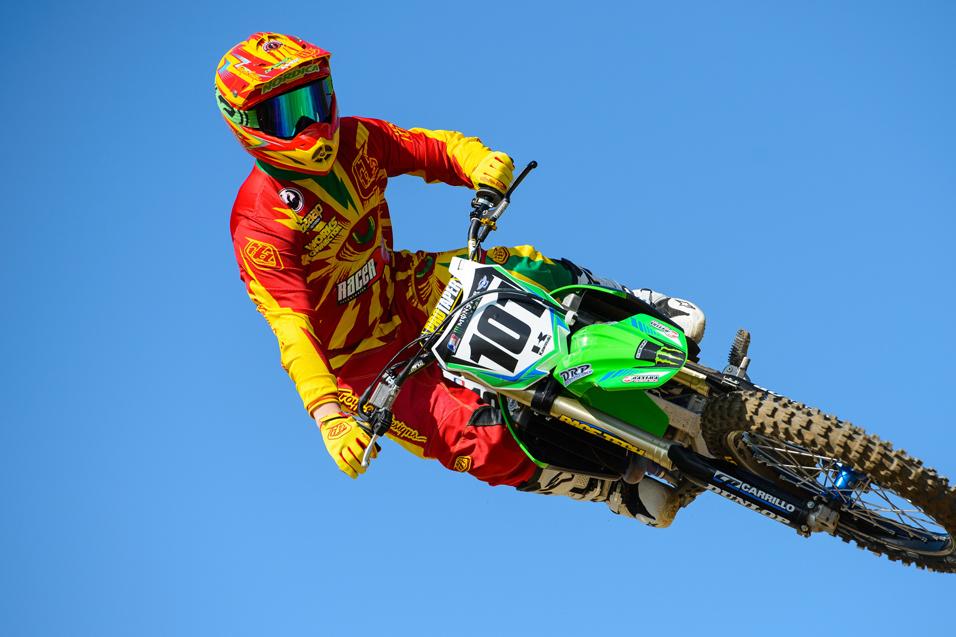 What is the deal with riders these days and the excuse of "the track is one-lined"? I mean, wouldn't every track have one line that is theoretically the quickest way around? Thus making every track a little "one-lined?” What else can the track designer's and builder's do to make the tracks multi-lined? Do riders want them wider? I think 12' or however wide they are should be sufficient. Do they want more rhythm lanes that have a multitude of combinations to get from corner to corner? Dallas sure seemed to have plenty of options, and still "one-lined". More 180 Degree corners and less 90 Degree corners? It seems like it would be a tough thing to solve and keep everyone happy. Is it even solvable? Or is this a phrase we can get used to because it isn't going anywhere no matter what the track is like?

Can't wait until Supercross is back in Minneapolis on April 13th! I will be sure to find the one line that is the quickest from my house to the HHH Metrodome!

This isn’t new phrase. As far back as I can remember I’ve heard riders complain of certain tracks being “one-lined.” While it would be easy to sit here and crap on riders from this era for not “manning up” and making passes happen I will try to explain what they are talking about. Sure, there is one main line that is the quickest way around any track. But certain obstacles and track layout can help or hurt when it comes to passing options. A technical, difficult set of whoops helps with passing. Unless you suck in the whoops, then it becomes a place to get passed. Adding 180 degree turns can also help with passing. But you have to put a berm on the outside of the corner to draw riders out of the inside line. In San Diego they had two 180-degree turns but they were flat. EVERY rider hugged the inside and nobody could pass. The more you bring the corner marker away from the berm the more passes you will have also. Tracks with too many 90 degree turns, sand corners, small whoops and easy rhythm lanes where every rider does the section exactly the same are bad for racing. Riders are already making fewer mistakes than ever, thanks the smooth, tractable power of the modern four-stroke. Add an easy track to that equation and you have 20 laps of follow-the-leader.

I am a long time rider/fan of the sport, and am also currently in graduate school to be a clinical neuropsychologist (which is basically a psychologist that specializes in the assessment/evaluation of brain injuries and brain-related disorders). After watching Dallas supercross and Zach Bell's scary crash in the heat, I was very surprised to see that he was allowed to continue racing. I've read that he denied being knocked out, but the way he was laying there and not moving out of the way suggests otherwise (if he was conscious, you'd think he'd want to move off the track being he was on the landing of a triple).

Concussions are scary things. We do not fully understand the consequences of a concussion, and more alarming, there is not a great way to do an assessment of a concussion. After a significant insult to the head, the brain is hit by a rapid increase in blood pressure, which will then be followed by a number of inflammatory responses and metabolic changes that can last for a few days. I am sure Doc Bodnar and the Asterisk medical crew do an assessment of cognitive/muscle function before releasing a rider after a suspected concussion, but, as mentioned above, the brain is striving to reach homeostasis for a number of days and therefore you cannot determine the extent of a concussion immediately after it occurs. It should also be noted that a concussion does not require a positive loss of consciousness.

Zach Bell is young, talented, and extremely motivated to compete, and his career could have come to an end in Dallas. It is not surprising that Zach Bell wanted to ride; however, I think it's very surprising he was allowed to ride.

Thanks for the letter and for your concern for Zach. It sounds like you are on your way to a rewarding career in the field of neuropsychology. Congratulations on the big brain. Watching the savage thrashing that Zach took in Dallas I was 100 percent certain that he was unconscious, broken and likely done for the year or forever. But you should know that you can’t base your medical assessment on how “crazy” the crash was. I’ve seen people get thrown from cars in freeway rollovers and walk away unscathed. The Asterisk Medical Crew assessed Zach on the track and when they got to him he was conscious, speaking coherently and answering questions appropriately. He remembered the crash and explained in detail what happened coming out of that turn. He was taken to the rig and given a Scat 2 test, the most current form of testing for head injuries. Zach has shared with the press that he passed with a 92 and the minimum passing score is 81. This test includes number and word recall, balance and coordination tests and various assessments of mental clarity and function. While Asterisk does have the ability to sideline a rider, they found no symptoms in Zach to suggest that he had a brain injury. It’s easy to watch from the couch and give an opinion but there was an ER trauma doctor, several paramedics, a nurse and a certified physical therapist and athletic trainer on staff in the Asterisk truck. Let’s leave the professional decisions to the professionals.

The first two supercross winners of the season were Davi Millsapps and Justin Barcia who both also finished 1,2, at San Diego last week. The thing that both of these riders have in common is that they spent a long time in there careers studying the science of motorcycle racing under the guidance of Colleen. I call it a science because she knows motocross better than a lot of my physics Professors know physics. (I now study physics in my post high-school experience of the motolife.) I think one thing which I have not heard mentioned is the credit which Colleen Millsaps deserves for nurturing these two arguably best motocross riders. What do you think, is this seasons results a testimate to Colleens coaching abilities or am I wrong to give her so much credit for how Davi and Justin are currently doing this season?

Full disclosure: I don’t know Colleen. From what I’ve heard she has a pretty amazing setup down there in Georgia and there are a lot of good riders taking advantage of MTF. My question to you is: How does Colleen Millsaps know more about motocross than a physics professor knows about physics? Did your physics instructor get his education by taking his son to science fairs and watching the Discovery channel for ten years? Is he a real professor or a professor like Indian Jones was a professor? Or like Gary Bailey is a professor? Unless I’m mistaken, Colleen didn’t race motocross professionally. She spent a great deal of time taking Davi to the track and telling him his lap times and probably writing things on his pit board like, “Go Faster,” and “Breath.” Maybe she spelled breathe correctly, I can’t be sure. My point is that I’m certain she’s hired riding coaches to help the riders with the technical side of things. While she likely understands the basic tenets of motocross she is slightly under-qualified to be telling Justin Barcia how to ride a motorcycle.

I’m not knocking Mrs. Millsaps. She has an incredible facility and she is a savvy lady who has thought of everything that the aspiring motocross racer needs to have a successful environment. That place is packed year-round and from what I understand they are even looking at further expansion. She’s got a good thing going and Barcia won’t be the last rider you hear of who honed his craft at MTF. I’m not sure what college you’re attending but it sounds like you might want to take your studies somewhere else.