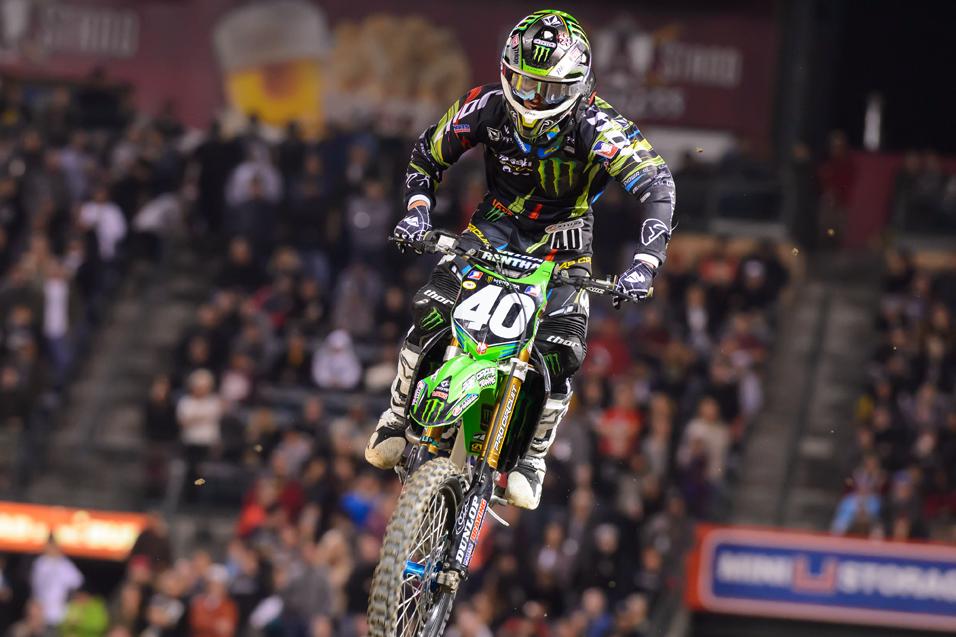 - Dungey clicked off eight straight laps under 54-second to begin the race.

- Honda Muscle Milk’s Justin Barcia rebounded with his first podium since his win in Phoenix at A3—two DNF’s in-between. The vibrant youngster led the field with only one lap over 54 seconds. Rockstar Energy Racing’s, and current points leader, Davi Millsaps had only two laps over 54-seconds en route to a second place finish.

- An early crash put Chad Reed in a hole for the second consecutive week. The Aussie would rebound to finish fifth—beginning the race with 18 consecutive laps under 56-seconds.

- Yoshimura Suzuki’s James Stewart had his best finish of the season at A3, but three bad laps (14,18 and 20) would cost the two-time champion his first podium of the year. Stewart set 16 of 19 laps under 55-seconds, but those three laps proved costly. See more below.

One of the most intriguing battles of the night took place between a two-time champion, the current points leader, and the hotshot rookie. Stewart, Millsaps and Barcia jostled for position all night, with Millsaps eventually winning the war of attrition—finishing runner-up behind Dungey. But let’s take a deeper look and see where exactly time was gained and lost.

Stewart began applying pressure to Millsaps early, eventually taking over second on lap 6 (first full lap registered in second) with a 53.934 on lap 5 compared to Millsaps’ 54.528. Stewart held Millsaps at bay for a number of laps before the points leader mounted a charge that began on lap 9—but was helped tremendously when Stewart made a mistake in the rhythm section and set a 56.555 to Millsaps’ 54.871, letting Millsaps gain almost two full seconds and second place in the process.


Soon after, Stewart was getting pressure from Barcia for third. Barcia was also able to pick up nearly two seconds on Stewart on lap 14. But the real game changer came on lap 18, when Barcia picked up another two seconds on Stewart, ending Stewart’s chances for his first podium of the season. 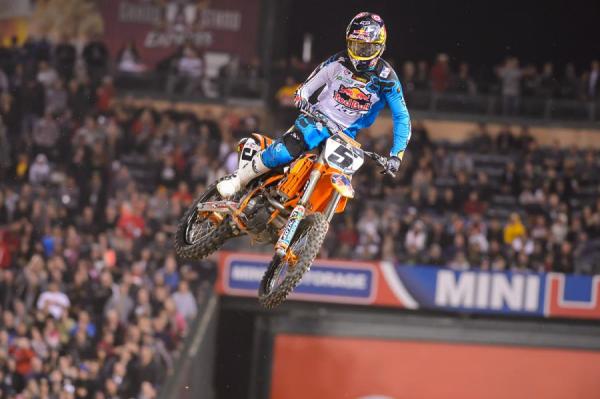 Ryan Dungey set the fastest lap in 450SX en route to his first win of the season.
Simon Cudby photo

- Monster Energy/Pro Circuit Kawasaki’s Martin Davalos set the fastest lap of the night (450/250 combined) with a 53.117 on lap 3. Davalos joins Red Bull KTM’s Ken Roczen and GEICO Honda’s Eli Tomac as the only riders in 250SX to set the fastest lap in the class this year.

- Eli Tomac and Ken Roczen were the only riders in the 250 class to set all of their laps under 56-seconds.

- Martin Davalos was on fire early at Anaheim 3—beginning the race with seven consecutive laps under 54-seconds.

- Star Racing Yamaha’s Kyle Cunningham scored a season-high fourth at Anaheim 3. Cunningham was one of the most consistent riders at round five—beginning the race with 13 straight laps under 55-seconds.

- During the first half of the 250 main event, second-place Martin Davalos was applying pressure to Ken Roczen. Roczen held a small lead based on his blistering speed on lap two, which was his fastest lap of the night. But on five of the first seven laps, Davalos went faster than Roczen. 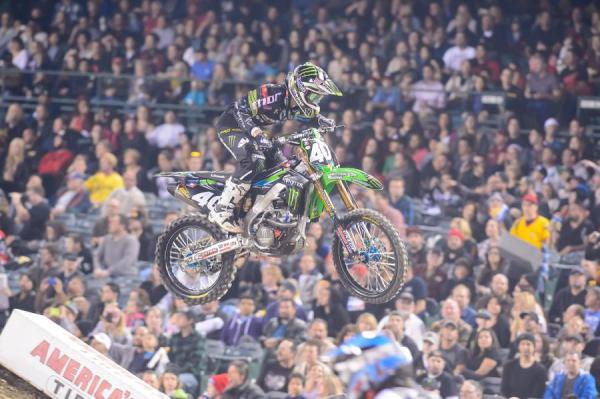 Martin Davalos set the fastest lap on the entire night at A3.
Simon Cudby photo