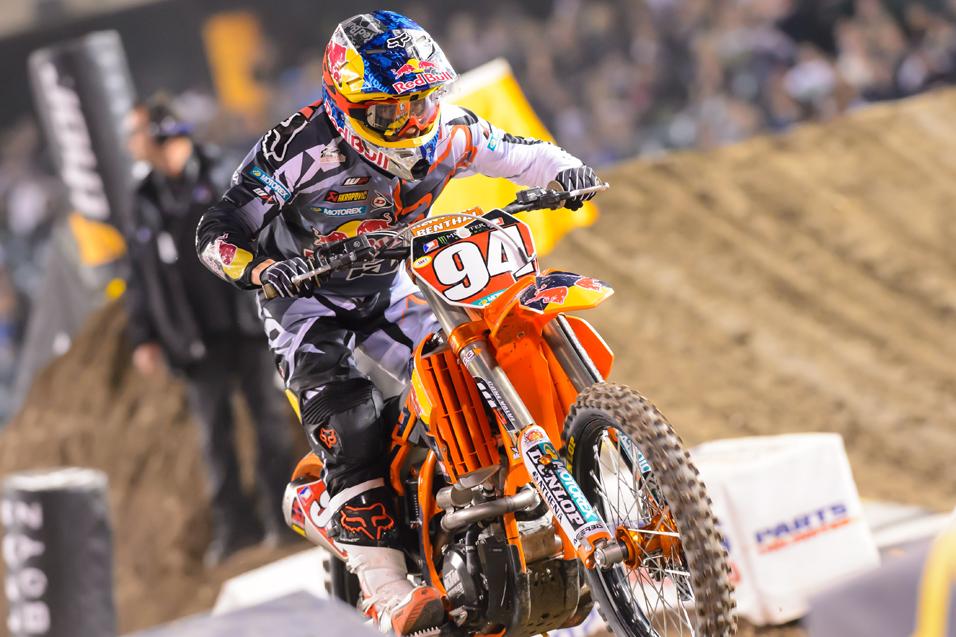 What a difference an Anaheim makes. Five weeks ago the 250SX West Region kicked off with a tour de force by Eli Tomac of the GEICO Honda team, leading the way throughout almost the entire opening main event. At the second Anaheim, two weeks ago, Tomac led much less, dueling with Red Bull KTM's Ken Roczen and Lucas Oil/Troy Lee Designs Honda's Cole Seely before taking his third straight win. But by the time we reached the third and final Anaheim last Saturday night, Tomac was no longer undefeated, nor was he even the points leader—a couple of crashes at Oakland changed all that. He didn't win the race either.

Now momentum is firmly in the hands of Roczen, the charismatic kid from Germany who looks like he's having more fun out there than anyone. He seized the night when Tomac crashed in Oakland, tracking down Seely and earning his first win of the season and the points leader's red plate. He carried it through Anaheim and chalked up another win. Now he holds a 20-point lead on Tomac with one more race—Saturday night in San Diego—before this region shuts down for two months. That's a lot of time for Tomac to get back on track, but he's got a big hole to dig himself out of if he wants to repeat as West Region #1. 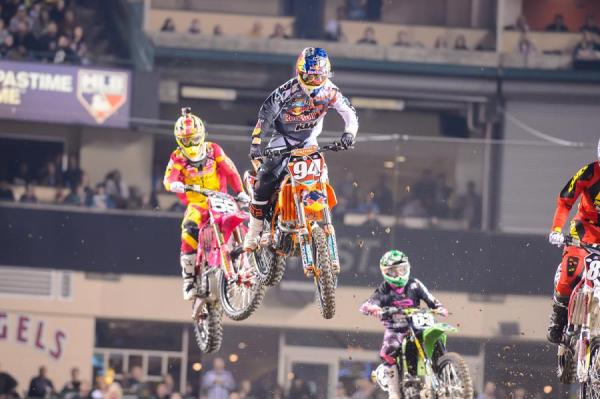 Is it too early to start looking ahead to the East Region? Not at all. There we’ll see the return of Monster Energy/Pro Circuit Kawasaki's Dean Wilson and Darryn Durham—both out for pretty much all of the last summer—and that team's chance at redemption after a mostly dismal showing in the west. We will also see Red Bull KTM's Marvin Musquin trying to match up with what Roczen has done, plus Rockstar Energy's Blake Wharton, GEICO Honda's Wil Hahn and Justin Bogle, rookies Zach Bell, Jeremy Martin, and Justin Hill, the fast-starting Alex Martin on the now-blue Eleven10 Mods team, and a whole bevy of other fast young riders...

The West is not over by any means, but the way Ken Roczen is riding—fast, smart, and aggressive—is going to make it difficult for anyone to catch. If that's the case, we will see a German crowned champion of a U.S. series for the first time since 1973, when the late Adolf Weil won the Trans-AMA title.