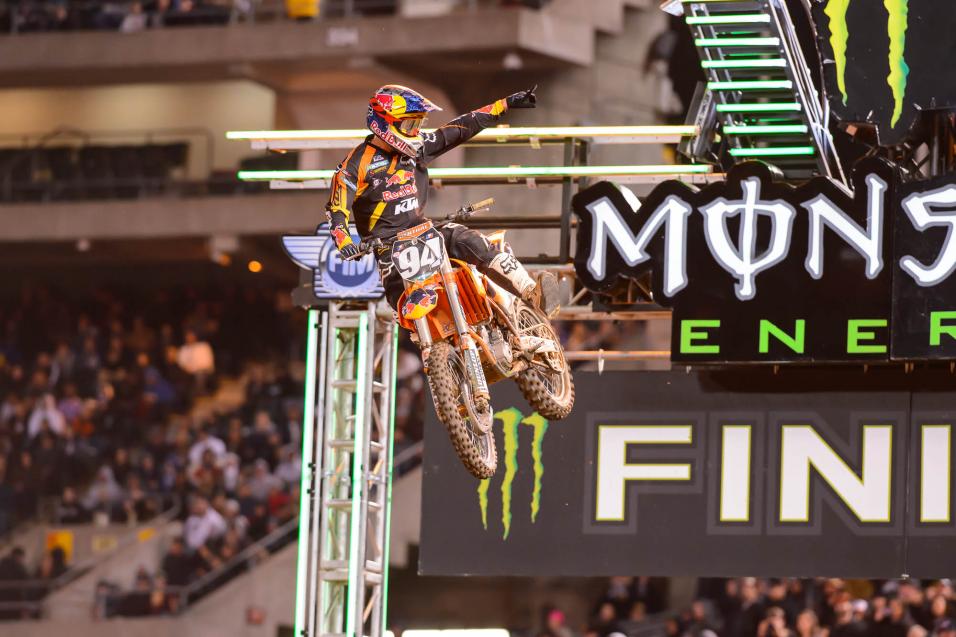 Well, once again like last week, Monster Energy Kawasaki’s Ryan Villopoto was the man here in Oakland at round four of the Monster Energy Supercross series. RV led wire to wire for his second win in a row and just, as the kids say, crushed it. He had about a seven second lead on the fourth lap over series points leader Rockstar Racing’s Davi Millsaps and seems to have found his groove.

Villopoto doesn't need much help, but his lead was made bigger thanks to a massive crash in the second turn that took down about ten riders. After the first turn there was a set of whoops and then a right hander for the second turn, and Team TwoTwo Honda’s Chad Reed and JGR Toyota Yamaha's Josh Grant proceeded to clean out the rest of the field including top qualifier Yoshimura Suzuki’s James Stewart and Muscle Milk Honda’s Justin Barcia. [Note: we earlier reported that Grant and Reed had gotten together first, with some blame going Grant's way, but further review shows that's clearly not the case. JG was an innocent victim]. And although they didn’t fall his teammate Trey Canard and Red Bull KTM’s Ryan Dungey were held up quite a bit. It was pure carnage. Stewart and Barcia were unable to finish (Barcia from injury, Stewart from a bike problem). It made for a crazy start and one that left riders like Reed and Grant way, way back when they got going. 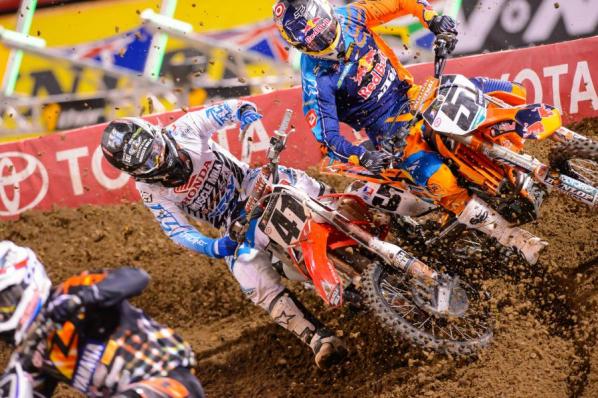 Canard and Dungey going at it.
Photo: Simon Cudby

Opening round winner and points leader Davi Millsaps rode a great race to get second, he got another good start and pulled away from the rest of the racers (except for Villopoto). He’s still in the points lead by seven over Canard and eight over Villopoto. Millsaps is for real.

Third place was Dungey who, like Canard, had a lot of ground to make up and rode a great race to work through the pack. It was a nice rebound after two tough races in a row for the 2010 SX Champion.

In the 250SX class, it was fastest qualifier and heat race winner Red Bull KTM’s Ken Roczen who stalked TLD Honda’s Cole Seely for half the main event before making a nice move to get by and take the win. Roczen was very, very good all day long and is now the points leader….

And that’s because GEICO Honda’s Eli Tomac suffered a bad start and a couple of crashes, the the last one was a pretty good one in the whoops. Tomac walked off but he was shaken up and just like that, after three straight wins, Tomac is now third in the series. This is all very similar to what happened to him last year in San Diego—although he did rally back from that to salvage the title. 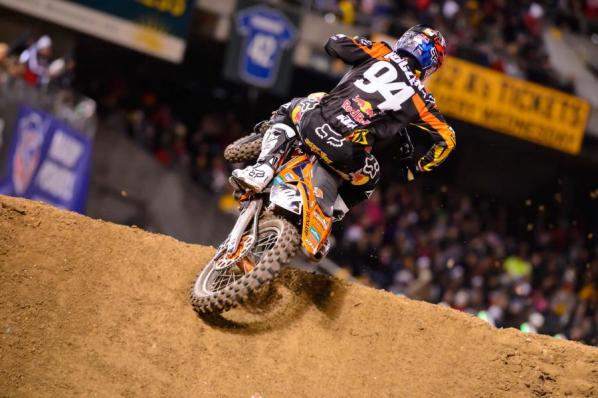 Rockstar Energy Racing’s Jason Anderson gathered up a podium with a great ride to get third place. Anderson was very fast all day long and in the heat race he came from a long ways back to get right up there.

Only days after the team announced that it will close after supercross, JDR KTM’s Malcolm Stewart and Joey Savatgy had great nights with a fifth and a sixth with Savatgy even pulling the holeshot. Also, nice ride for HRT Honda’s Austin Politelli who finished  eighth.
MotoConcepts/Smart-Top Racing’s Mike Alessi had his best race of the year as he ran as high as fourth (Mike’s starts in the main haven’t been very good, but on this night he got a good one and he avoided the big pile-up) and eventually ended up fifth on the night. 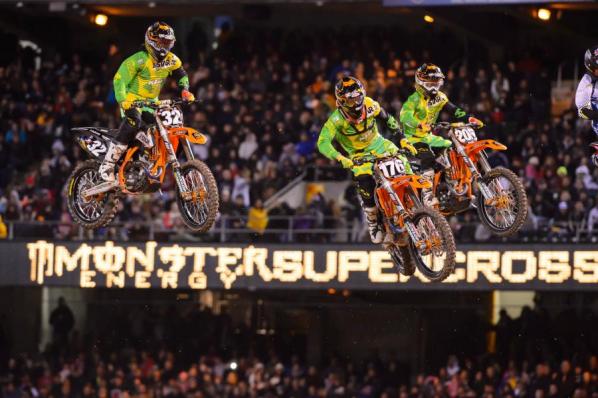 With his team folding up shop this week, Andrew Short showed up with the Kranyak Racing rig (The Kranyak team was helping out Josh Hansen, but Hansen is sick and was forced to miss this race and probably some more). Shorty rode on a production Honda CRF450 with Enzo KYB forks, a high compression piston and an FMF pipe. With all this chaos around him, Short tied his best finish of the year with sixth.

A couple of riders having great nights were BTOSports.com KTM’s Matt Georke, who got zapped by Short on the last lap but still finished seventh, and Slaton Racing’s Vince Friese, who finished a career-high ninth.

Monster Energy Kawasaki’s Jake Weimer was forced to pull out of the race from a bout with pneumonia and that’s a bad deal for a rider that was right up there in the points battle.
Although retired now, GEICO Honda’s Kevin Windham came out to thunderous applause here and did not one, but two transfers. And with no goggles!