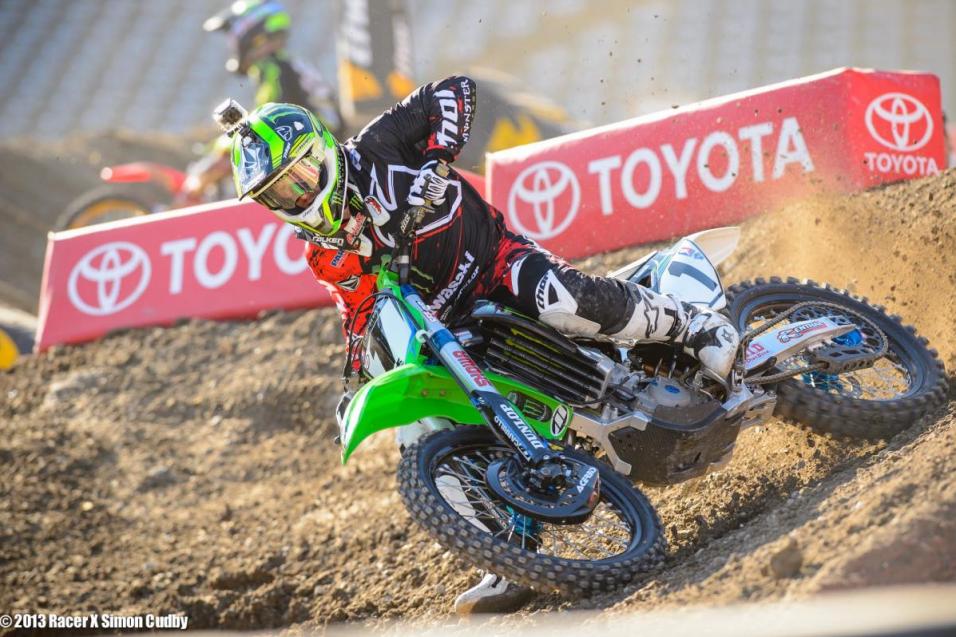 The final practice has ended here at A2 and neither of the normal two qualifying assassins, James Stewart and Eli Tomac, set the fastest time in their respective sessions. But before we get into a breakdown of how practice went, the track deserves a brief mention. It has a few tricky sections, most notably a rhythm lane that requires some serious precision to get through cleanly and safely. The fast line requires riders to triple a set of jumps in the middle of the lane, and if a rider fails to perfectly downside the landing, hitting the next combo, which is a table-on-jump-off, becomes an extremely dicey affair, especially for the 250 guys. That said, these are the best guys in the world, and very few of them have had trouble hitting the line consistently. Some of the top 450 guys, as well as Tomac, have even started jumping completely over that table on their way out of the lane. 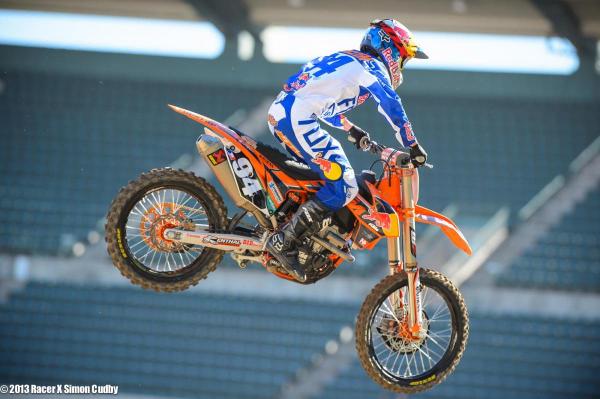 Roczen was fastest in practice. Will the Tomac-Roczen battle finally materialize?
Photo: Cudby

The second session was a slightly different story. Davalos was at the top of the leaderboard for short period, but Roczen took over and ended up fastest with a 54.515, followed by Davalos (54.769), Jason Anderson (54.961)and Tomac (55.306). If the fact that Tomac didn’t set the fastest time bothered him, he certainly didn’t show it. He maintained his super aggressive style and experimented with several different rhythm options. To the delight of the crowd on hand, he even threw out several monstrous whips. He didn’t set the fastest lap, but it sure looked like he was feeling it out there.

In the first 450 qualifier, there really wasn’t a whole lot going on. Davi Millsaps and Chad Reed both spent portions of the session on top, but Ryan Villopoto would close it out as the fastest rider by laying down a 53.984. James Stewart, who we now know is riding with a torn ACL, put in a hot lap at the very end, but his 54.586 wasn’t enough to topple Villopoto’s time. 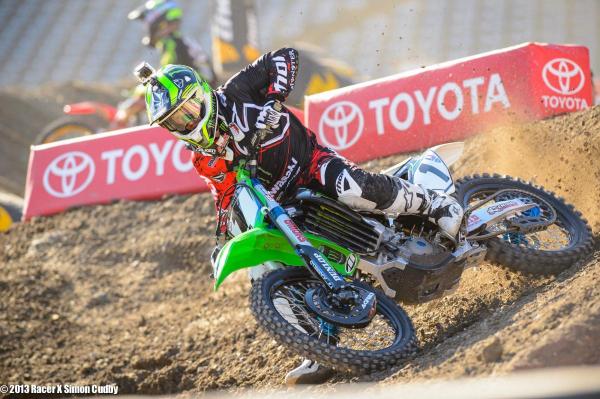 In the final 450 qualifier Villopoto picked up where he left off by setting the fast time, but Reed quickly bounced him from the top of the board. Reed looked more comfortable on the bike than he’s looked at the first two rounds, and for the most part, his lap times reflected that, as they were much more competitive than they’ve been so far this year. He also tossed in some big whips for good measure and was one of the few guys who was jumping completely out of a rhythm section instead of landing on the final table and squirting off. But it was Villopoto who was once again fastest, and he was the only rider to dip below the 53-second mark with a 52.976. Dungey was second fastest with a 53.653, followed by Stewart (53.991), Millsaps (54.057), Reed (54.205), Canard (54.326) and Justin Barcia (54.489).

For a complete listing of times from qualifying, visit results.amasupercross.com. For updates on tonight’s action, keep it locked right here at Racer X Online, and follow us on Twitter, @racerxonline.