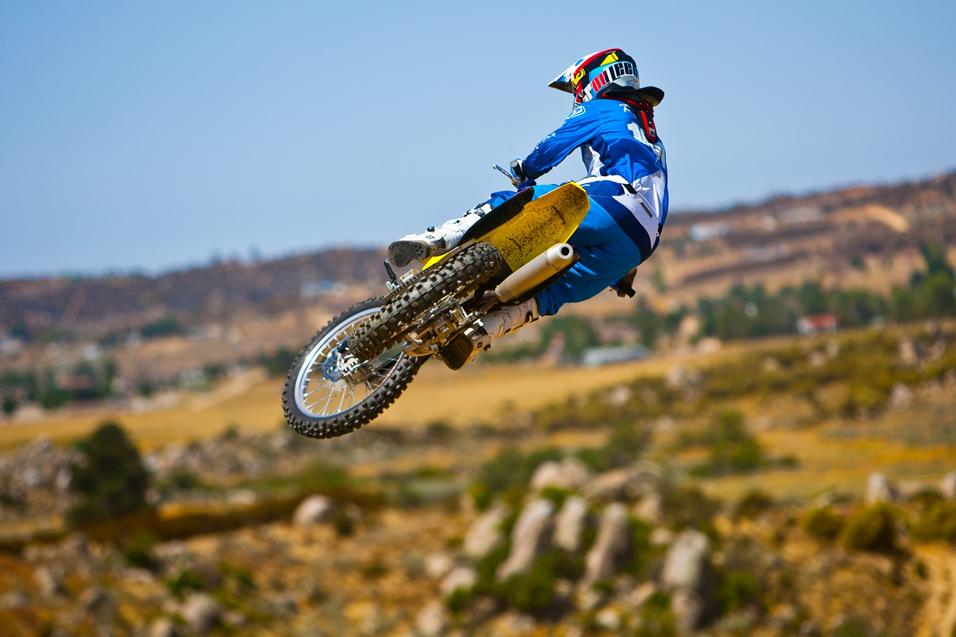 As a huge fan of MX and SX, I love to spend time on Racer X online and LebigUSA (Yes, I'm French, keep reading please! haha) in order to keep me abreast of the news.
I noticed that there is not a lot of talking about the FIM world championship (I'm not trying to blame anybody) so here is my questions: What do you think about having a World Supercross Championship? Or something like that for the guys who ride to FIM world championship. I mean, do you think it will make them ride better? Because many people think the Americans riders are better that the Europeans rider and that's all but others think (I’m part of this team) that supercross is the key. One more question, do you have any idea why Giuseppe Luongo is waiting for or can he even do something about that?

PS; Thanks and Forgive me if it's not well written and Go Marvin "Marv' attack" Musquin! first SX win is coming in 2013!

Thanks for writing in… any French guy who is pals with LeBig is alright with me. First of all, there is a “World Supercross Championship.” It’s called the Monster Energy supercross series and in case you haven’t been paying attention there is a round in Canada. That makes it International. And really, even if it stayed right here in the States, which it probably should, it is the premier supercross series in the world and one of the biggest motorcycle series in the world. I know that what you mean is a European supercross series for the GP riders to compete in during their off-season and I think it would be great for the health of the sport over there. There are a few rounds that already draw a good crowd [Bercy, Geneva, Madrid] so it doesn’t seem like it would be too difficult to put something together. And I definitely think it would help make GP riders better. Why? Well, what do you think Tony “Ravioli” Cairoli and his pals do once the MXoN is over? I’ll tell you what they do… they wash the sand out of their ass, throw on some swaggy clothes and hit the discotheque for two or three months drinking champagne and smoking French cigarettes. You know what U.S. riders do? They squeeze a quick week of vacation in on Hawaii and then they climb right back on their road bikes and start training for the up-coming supercross season. You can’t compete with that on an even playing field. It isn’t that Tony isn’t capable of riding supercross he just never gets to do it. No idea what Luongo is waiting for…Probably an opportunity to make more cash.

Good day to you American whooping and hollering types.

I recall Decades gone by when Yamaha started the drive towards four-strokes. Eventually the other manufacturers concurred this was to be the way forward.

At youth level two-strokes still reign supreme, with the exception of HONDA and the CRF 150. Why so? Surely the same alleged emissions policies that produced the enforced change to four-strokes of adult bikes apply to any cc.  Now that Honda has a stable consisting solely of four-strokes, will the other manufacturers follow suit, or will two strokes remain at youth level?

Negating the boredom of the economic and cost reasons for keeping youth mx predominantly two stroke, there’s no escaping talent on a two stroke, I’d like to see them remain, as I believe riders have much to gain in skill from learning on two strokes.

What say you dear chap?

I read your entire letter in a smashing accent of the Queen’s English. Jolly good show, mate! Okay, that was fun but let’s go back to me being an uncultured American pig with a nice set of teeth and all that. Honda decided to go all-in on the four-stroke movement and completely did away with their two-stroke line. They put all their eggs in the 150 four-stroke basket and I think the end result is that they don’t have any eggs left. Two-strokes are still the bike of choice for mini racing and Honda does not make one. I don’t know what the other manufacturer’s plans are but KTM is really the only brand improving their two-stroke line [including minis] and they win a lot in those classes. Time will tell but I wouldn’t hold your breath for a resurgence of two-strokes. We’ve made our bed and now we’ll have to wear ear plugs and sleep in it.

Hope this email finds you and your family well. I don't subscribe to Racer X; I'm the guy that pays full retail when I get a chance to run by the book store. This usually means I'm a couple issues behind. I just read your article in the Racer X mag about not getting enough sleep and I laughed my ass off!! We are so much alike in the particular section of our lives, However, I do get more sleep than you.  The family, work, hobbies, use to be, wanna be, rat race is exactly my life too. I'm not as fast as I use to be and it sucks. I'm fatter than I use to be and it sucks. I try to get my hair cut in ways that make me look younger with no avail. My wife has to put me in my place once a month when my plans for riding consist of more than once a week (usually only 2-3 hours at a time). On top of my early mid-life crisis, I have my company to run, which is altered by the economy and government interventions.  It seems the majority of guys I ride with are single with no idea  why I can't ride for a couple of hours this Saturday because my wife has her long run and we have two birthday parties to attend...., which I, unlike most, actually enjoy.  I mean come on, pizza, jumpy things and I'm an adult motocrosser. You know I'm on those things with my kids..(3 girls by the way. ages 6, 4 and 2....and a female dog) I get warnings from older parents all the time. Trust me. Anyway, just wanted to vent to someone who has the exact same struggles...or are they?

Sounds like you and I could be really good buddies if it weren’t for the fact that I’m not taking any new friends right now. We both have way too many females in our homes, not enough time to ride, detest government overreach, we’re chubbier than we want to be and we absolutely kick ass at birthday parties held in bounce-house buildings. Point of fact: I’m undefeated in the maze race jumpy at all parties I’ve attended for kids age six and under. The word you are searching for is awesome. I don’t know where you’re coming from on the crappy hairdo thing because my fresh cut is totes working. Anyway, here’s to the married life from one guy in the struggle to another. Sure, we don’t get to ride as much as we want or do really anything that we want as often as we’d like but it beats the alternative: Being that old single guy at the club wearing $250 jeans, a tight shirt, a fedora and almost an entire bottle of Cool Water cologne in an effort to actually look cool. Sucks to be that guy.