CORONA, Calif. – A lineup of the best speedway competitors from the United States and Europe was solidified on Wednesday, December 12, as the official rider draw for the Monster Energy World Speedway Invitational took place at the Monster Energy World Headquarters. With Grand Marshal Bruce Penhal on hand to make the selections, the 23-heat GP race format for the December 29th event was completed.

The 16-rider lineup is a who’s who of global speedway racing, featuring nine Americans, a pair each of English, Polish, and Swedish riders, as well as one Dane. Additionally, two alternates, each from the U.S., will be ready to step in, if called upon.

The draw sets the program for the race on December 29th, determining which events a rider will compete in during the night. Below is the draw order. Refer to the downloadable attached program score sheet to see the events each rider has been set up in by the draw.

The all-star lineup is headlined by four former World Champions – Gollob, Hamill, Hancock, and Janowski (Under-21) – as well as five U.S. National Champions – Hamill, Hancock, Janniro, Venegas and Wells. Additionally, several of the sport’s brightest young stars from both the U.S. and overseas will have the opportunity to show their talents on a premier international stage.   The official score sheet shows the unique and exciting GP format that features 20 initial four-lap heats from which riders will accumulate points in an effort to become one of the top eight competitors to reach one of the two semi finals. The top two finishers from each semi move on to the final, which will determine the inaugural winner of the Monster Energy World Speedway Invitational.

The Invitational will also showcase America’s fastest motorcycle speedway amateurs, who will have their chance to race in the spotlight of this big night. The Mini 150cc class and the Junior 250cc division will be composed of four riders apiece, with a pair of heat races and main event scheduled for each class to determine the overall winners. The future of American Speedway will be on full display following the first four sets of pro heats and just prior to the Monster Energy Final. 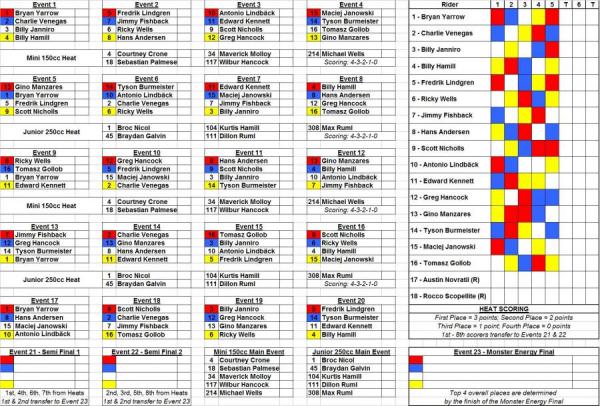 Tickets for the inaugural Monster Energy World Speedway Invitational are available for purchase through December 22nd by visiting the event website at www.IndustryRacing.com. Tickets are priced at $18 and $10 for Juniors and Seniors. Tickets purchased the day of the event will be an additional $5. All kids under 12 are free with adult admission. Parking is $5 with motorcycle parking free of charge. The event will run rain or shine as The Grand Arena has a roof.

To get a rundown on the most recent Monster Energy Speedway Grand Prix season, log onto www.SpeedwayGP.com.