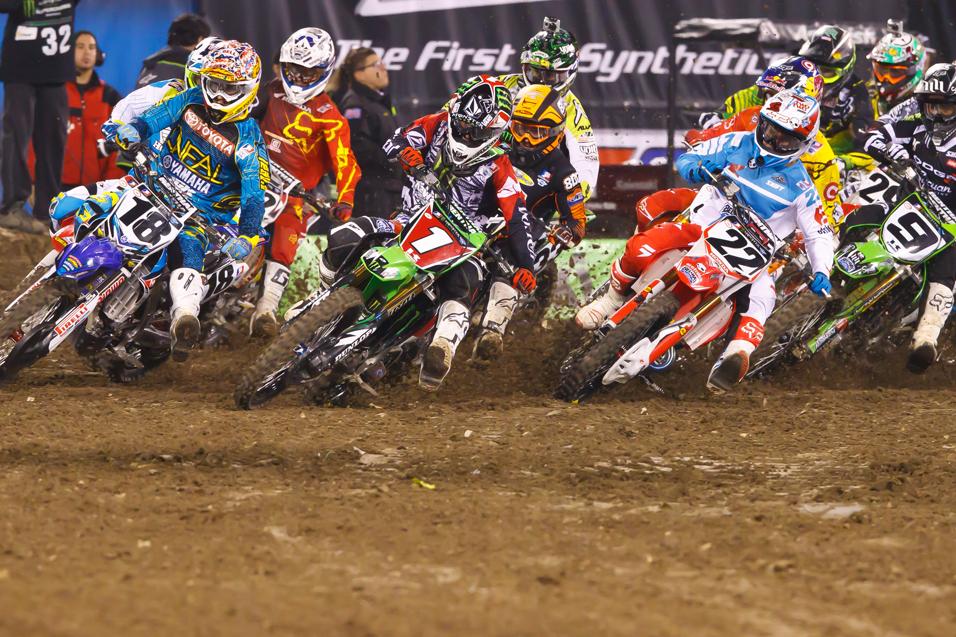 Rev Up The Holeshot

Hello, everyone, and welcome to the Rev Up. When you think about supercross and motocross the first images that come to mind are racers flying through the air or blasting around corners. Most of the most famous photos of all-time show champions taking the checkered flag in a one-handed-pan or riding across the finish line with both arms up. It is hard to argue against the “winning moment” as the most important aspect to capture. That said, if you ask any of the greats what the most exciting, nerve racking, and absolute balls to the wall part of any race is, the answer will always be the holeshot.

The way we start our trade is spectacular. Charging in a pack around a grueling course is one thing, but the start is a medium all in itself. Holeshots are primitive and crude in that we simply line up racers behind a gate, which hits the ground a milli-moment before all hell breaks loose. It is a veritable drag race from a stand still that sets the whole mess in motion. When I think about the volatility of holeshots, the kick off of an NFL game comes to mind. It is equally primitive since it is hardly a set play but more of a wide open head on collision. But an argument can be made that there is skill and strategy required to run a kick off back for a touchdown. And skill and strategy certainly play a part in being the fastest out of the gate and rounding that first corner first among the pack. At the heart of both is commitment, confidence, and pure determination. And both create some of the hardest hits and crashes of the game. 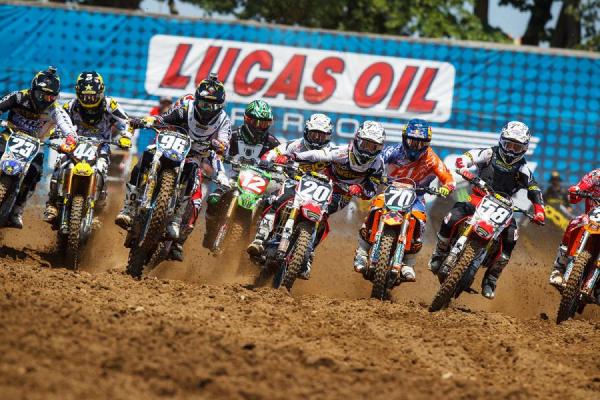 The start is the most exciting, nerve racking part of any race.
Simon Cudby photo

Not all starts are created equal. Some of the most unique I recall in my racing days were at the amateur nationals. Lake Whitney, Texas, had one of the longest, most challenging starts I’ve ever seen. A concrete gate was followed by about a 100 yard sprint into a huge, but kind of tight, left hander. If you started from the inside it was shorter to the corner, but almost impossible to stay wide open around from that angle. Dennis Hawthorn used to start from the far inside, which actually gave him a negative angle, but he would never crack the throttle and stand up on the pegs all the way around. I remember practicing starts there and never being able to go wide wide open around that corner. That only happened for me when 38 other bikes were chasing me. But even rounding that first turn, the work was only half done.  Another 200 yard stretch followed, and that led into another left hander that was just as tight and wide. From there it was 4th or 5th gear wide open into a long, slow, rough, right-handed sweeper. If you did it right you never really let off the gas until the huge table top that completed the holeshot.

Ponca City remains the scariest start in the history of motocross if you ask me. No matter what level you're used to ... it was terrifying. It was grass. You could be 5th gear wide open by the time you reached the first corner. It narrowed sharply and you could see and feel the front fenders closing in on both sides. Only the strong and the hard held it wide open for the holeshot there. A lot of times even that didn’t put you in the clear. What happens when unstoppable forces meet immovable objects? Ambulance rides and the type of pileup crashes folks only whisper about. That’s what felt so good about pulling one there, though. You challenged the beast and won. I remember twitching from the cold chills when I finally let off and made that left hander and saw my Pops swinging a white towel from the fence line.

Loretta Lynn’s start used to be fearsome, and I’m glad they changed it. Unlike Ponca, and much, much safer, they disc the start at Loretta's over a foot deep, and this slows the bikes down. A few years back, they even shortened the straight, too. But like the rest of the track,  nothing changes completely. Again, you never really let off the gas for about a 1/4 of a mile. There was a slight right handed sweeper that led into a long straight away, and ultimately into an Indianapolis style left sweeping corner with two apexes. If you rounded the second apex with the holeshot you could look up and see 42nd place still coming down the straight. I remember rounding the first bend with the holeshot, and being in 10th place by the time I reached the end of the section because I just couldn’t make myself hold on the gas that long. 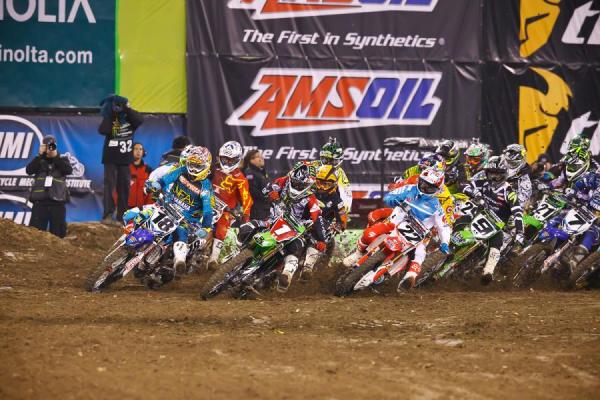 Supercross starts are not as long, but they are just as vicious.
Simon Cudby photo

I always liked the start at High Point the best of all the outdoor nationals, though. The steep uphill climb always manifested a sound that you only hear there. Again, it is almost impossible to leave it wide open around the first corner, and again you can’t really, really claim the holeshot until you first conquer the proceeding downhill left handed sweeper into the tight right at the bottom. It’s like a horse shoe with a huge bend in the middle serving as the elevation change.

When Glen Helen created the Talladega turn it may have created the biggest, longest start in motocross history. The bikes are completely topped out when they make the gradual, but steady climb up into the turn and feel their bikes load as they make that amazing high banked right. Sans foot on the rear brake.

Supercross starts aren’t as long or fast, but they are perhaps more vicious. In part because they can decide the outcome of the race, as only one man has ever come from last to to win a SX. (RJ L.A. Coliseum ‘87). The short events create a panic on the starting line that you can feel in the stands. Some of the greats like James Stewart, Chad Reed and Ryan Villopoto are stealthy because they are thinking ahead of the first corner if they don’t get a good jump. Those guys can round the first corner in 10th, and be knocking on the door of the top three by the second. Instinct can be the only explanation for how that happens because nobody can think that fast or aggressively. It is purely something that those guys do automatically and it’s awesome. 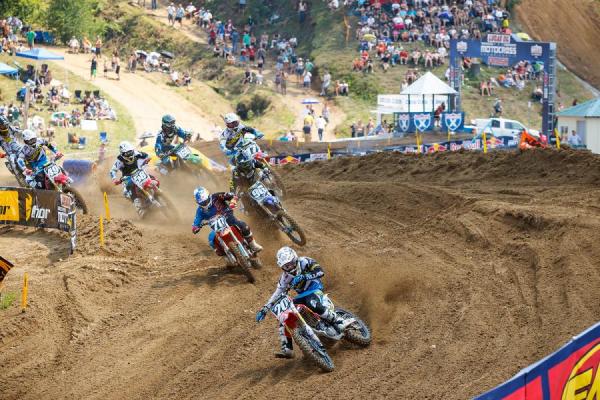 When you get a start like Justin Barcia (20) did this year at Millville, it's always a good feeling.
Simon Cudby photo

You can play a start like that, or you can go for broke. A bad gate pick, or getting the dreaded far outside creates a situation for a contender. He has to concentrate, commit, then have the fortitude to sleep in the bed he made. Of those scenarios, the legend is this: go here and watch the 33:30 mark. This is Damon Bradshaw's holeshot of death from Anaheim 1990. To me it is crazy how something that only takes seconds during a 20 lap, or 30 minute race can be so spectacular and important. Can you imagine how supercross would be with a rolling start of some sort? The riders lined up according to qualifying speed. You could say it's fair, because the fastest guys are rewarded, but it just isn’t motocross. It isn’t the way we do it.

The first holeshot of the 2013 season is a few short weeks away. Ho, ho. What are some of your favorite holeshot memories? Who do you think are the greatest holeshots artists?