The new partnership positions the ITC as MPE’s sales agent to Italian powersports companies who market to America and seek to establish and strengthen essential connections by exhibiting at next October’s AIMExpo in Orlando, Fla. In turn, AIMExpo will showcase Italian products to the North American marketplace by working with ITC’s Los Angeles office to create an “Italian Pavilion” at the inaugural show.

“It makes every sense to announce our collaboration today at EICMA, as EICMA has very much been the inspiration for AIMExpo from day one,” said Larry Little, Vice President & General Manager of MPE’s Motorcycle Group. “The agreement with ITC to showcase AIMExpo to Italian industry is as exciting as the creation of the Italian Pavilion at AIMExpo to showcase Italian product to U.S. retailers and consumers. The American consumer has a clear appreciation for Italian design, evident in the style and beauty of Italian motorcycles and related gear which will be on full display at the Italian Pavilion.”

The ITC is the government agency that promotes the internationalization of Italian companies all over the world with offices in 80 countries and more that 1,000 events per year. Riccardo Maria Monti, Chairman of the Italian Trade Commission, commented on the partnership.

“ITC is becoming a brand new Government agency that helps create the conditions to develop and gain strong roots for Italian businesses across the globe. The key to doing so is in finding the proper platform where Italian companies can present themselves in the best possible conditions to the greatest concentration of potential customers, and AIMExpo in October 2013 is the perfect scenario for the Italian motorcycle industry. The agreement that has been signed with Marketplace Events, combined with the Italian Pavilion which is being organized by ITC in Los Angeles, will enable Italian companies to showcase their products in the most favorable sense.” 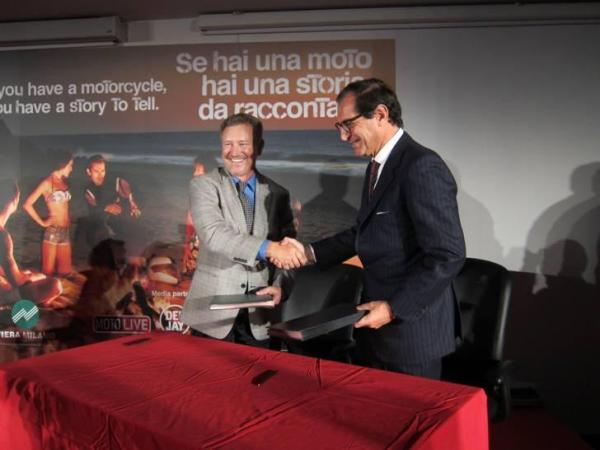 Pierpaolo Celeste, Italian Trade Commissioner, Milan office, added, "the policy of the ITC with this agreement is to lay the foundation of the presence of Italian companies in the most important market overseas for size and number of customers. It is the first ever agreement of its type done for the U.S. market.”

“In the aftermath of 2008, many Italian companies suffered with the decrease of the U.S. market, with 2009 reaching a modern-era historical minimum of exported Italian motorcycles and parts to America,” explained Bocchi. “Signs of recovery came slowly in 2010, and improved again in 2011. Motorcycle industry exports for 2012 are on track to be more than triple that of the low point, and moving forward, AIMExpo is perfectly timed to boost Italian motorcycle trade in the U.S. to even greater gains.”

EICMA, produced by Associazione Nazionale Ciclo Moto Accessori (ANCMA), is the premier motorcycle trade show in Europe and the only not-for-profit event of its kind in the world. For 2012, EICMA’s 70th event is expected to register the largest show in its history, dating back to 1914.

The EICMA template has driven the development of AIMExpo from its beginning stages, inspiring the vision that will lead to the launch of the first combined consumer, trade, and media powersports event in North America. It will bring the entire industry together in a celebration of motorcycling, the motorcycling and powersports industry, and the motorcycling lifestyle.

“America is a very important market for Italian companies, and we are looking forward to the fresh approach in North America of AIMExpo," said Pier Francesco Caliari, Managing Director of EICMA and ANCMA. “It is important for the growth of Italian industry to have a show in the USA that mirrors EICMA, and we look forward to a strong collaboration with AIMExpo as they create the ideal North American platform for the promotion of all things two-wheels.”

Mike Webster, President of MPE’s Trade Show Division commented, “many years ago, I worked with the ITC to create the first Italian Pavilion in America. It is rewarding to reunite with the ITC, especially now with Carlo Bocchi of the Los Angeles office, to work together to bring this tremendous exhibition of Italian artisanship back to America. We’re thrilled that the ITC and EICMA/ANCMA both view AIMExpo as their show of choice in North American for Italian industry.  I am especially delighted to welcome the Italian Pavilion back to America!”

The American International Motorcycle Expo’s purpose is to serve as the catalyst to bring together industry, press, dealers and consumers in a single arena that creates a grand stage for motorcycling in the U.S. and North America, and delivers an efficient and energetic market-timed expo platform for B2B and B2C in the motorcycle industry. AIMExpo is the single most important show of its type in the North American market and will have international impact within the motorcycling community.

About Marketplace Events
Marketplace Events creates uniquely vibrant marketplaces that connect enthusiasts with experts, products and services in dynamic face-to-face environments.  The company produces 31 consumer shows annually in 21 markets that collectively attract 14,000 exhibitors, 1 million attendees and another 1 million unique web visitors annually.  From 14 offices, the 100-person staff produces some of the most successful and longest-running consumer shows in North America, including market leading home shows in Philadelphia, Washington, D.C., Orlando, Minneapolis, Salt Lake City, Indianapolis, Toronto, Montreal and Vancouver – some of which have endured for more than 50 years – as well as more recent launches and acquisitions in markets such as Denver, Cleveland and Dallas, which is produced in partnership with Dallas Cowboys Stadium. www.marketplaceevents.com

About Italian Trade Commission
With a global operational network of over 100 offices across 84 countries, including five in the U.S., the ITC uses trade, business opportunities, and industrial cooperation between Italian and foreign companies to connect businesses with one another.